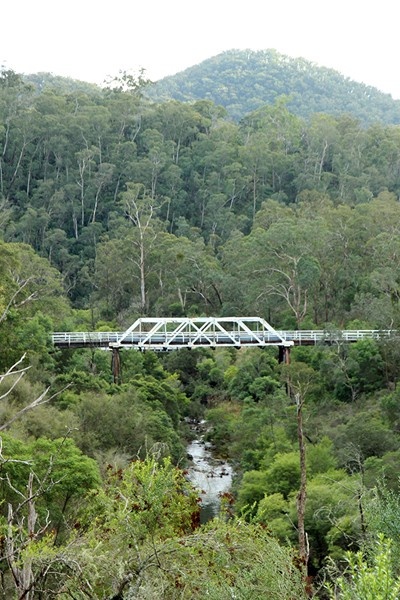 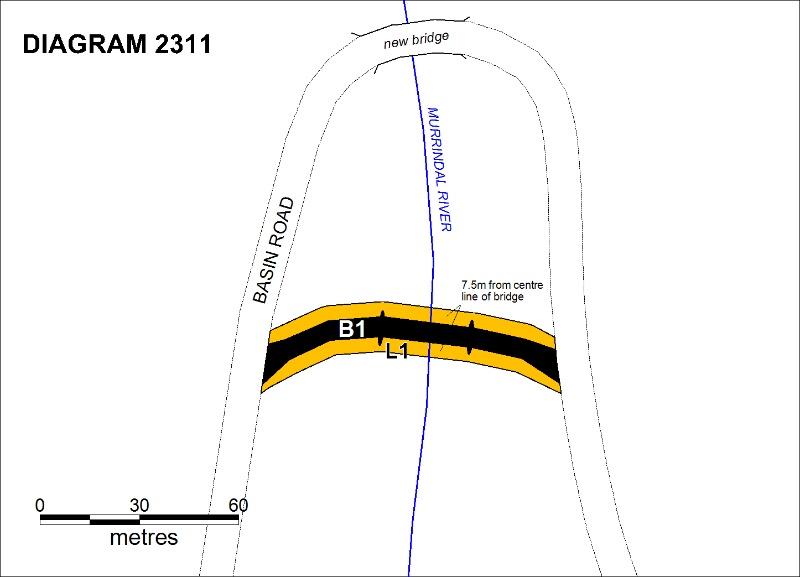 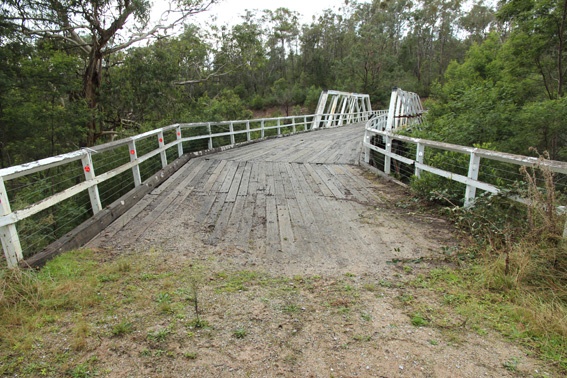 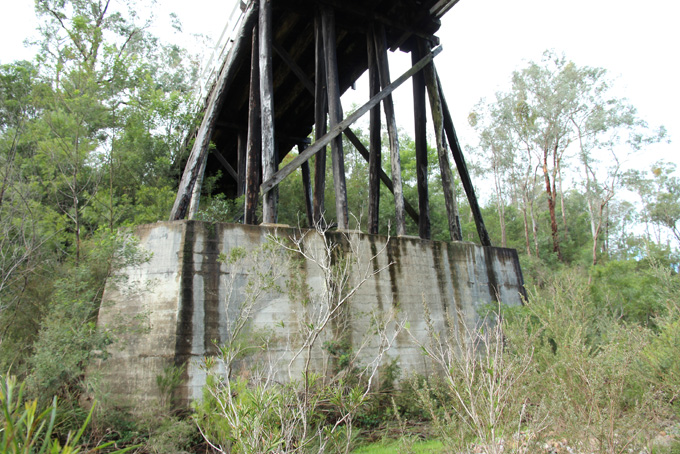 What is significant?
The Murrindal River Truss Bridge on Basin Road was built in 1927 and consists of a single timber Howe truss span and five stringer approach spans, supported on timber trestles fixed to concrete piers.

The Developmental Roads Act, designed to provide improved access from remote areas to main roads and railways, was pushed through by the incumbent Country Party government in Victoria in 1918 and was administered by the Country Roads Board (CRB). A large proportion of Developmental Act works, including improvements to existing roads as well as new roads, were undertaken in the hilly districts of Gippsland, the north-east of Victoria and the Otway and Heytesbury Forests.

The Basin Road, which accessed The Basin and later Jackson's Crossing, was surveyed in 1900 and was completed by c1909. The road was declared a Developmental Road in 1918 and in 1920-21 the CRB provided funds for substantial works. In 1923 the Acting Premier and the Chairman of the CRB visited Basin Road as part of the East Gippsland section of a "bad roads tour". In 1925-26 further road works were funded by a special grant under the Unemployment Act. In 1926 Developmental Road funding was approved for a new bridge over the Murrindal River, which was built under direct CRB supervision. The CRB described the bridge in its Annual Report as "virtually a viaduct". The bridge is now closed to vehicular traffic and has been made suitable for pedestrian use, with a new concrete road bridge built upstream.

This six-span Murrindal River bridge consists of five stringer approach spans of thirty feet (9.1 m) and one eighty foot (24.5 m) timber Howe truss span of a standard CRB design. This simple truss design was suited to fabrication in remote areas and was used extensively from 1919 to the late 1920s. The western approach spans are widened and gently curved. The transverse deck remains in place and is unusual in that the timbers are spaced approximately half their width apart, possibly to improve longevity. Until recently the deck was topped by two strips of running-planks for motor vehicles, but it is now completely covered in longitudinal planks. The timber trestles supporting the truss and the girder approach spans are supported on mass concrete piers. True timber trestles, as found here, are rare in Victoria. The outer ends of the approach spans are supported by buried timber piers. The Murrindal Bridge is located in a striking high-country landscape setting, on a winding road, crossing a fast-flowing river in a steep-sided wooded valley and with an impressive hilly backdrop.

How is it significant?
The Murrindal Bridge is of scientific (technological), historical and aestheticsignificance to the State of Victoria.

Why is it significant?
The Murrindal River Truss Bridge is of scientific (technological) significance at a State level as a rare example of a timber truss bridge. It is one of only four timber truss bridges remaining in the State. Within that group it is also a rare and intact example of a timber Howe truss span made to a standard Country Roads Board (CRB) design, with the only other extant examples being the three-span Genoa River Bridge and the single span Glenmaggie Bridge. The Murrindal River bridge is one of only two remaining single-span CRB truss bridges. Its significance is enhanced because it is accompanied by timber stringer approach spans and timber trestle supports, which are consistent with the timber technologies that accompanied most of the single truss spans built in the State.

The Murrindal River Truss Bridge is of historical significance as a representative example of the types of works funded by the Country Roads Board under the Development Roads Act 1918. The bridge and the associated roadworks were a very substantial investment in a road which serviced a small and otherwise-isolated hinterland consisting of The Basin and Jackson's Crossing. As such it is representative of the goals of the Development Roads Act.

The Murrindal Bridge is of aesthetic significance for its placement in a striking high-country landscape setting, on a winding road, crossing a fast-flowing river in a steep-sided wooded valley and with an impressive hilly backdrop. .