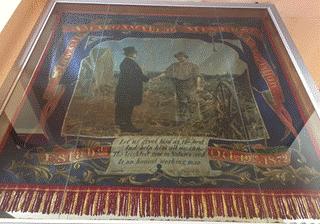 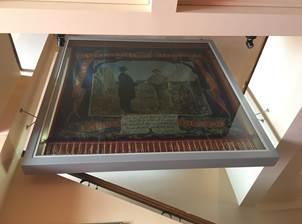 WHAT IS SIGNIFICANT?
The Stawell AMA Banner.

HOW IS IT SIGNIFICANT?
The Stawell AMA Banner is of historical significance to the State of Victoria. It satisfies the following criteria for inclusion in the Victorian Heritage Register:

Criterion B
Possession of uncommon, rare or endangered aspects of Victoria's cultural history.

Criterion D
Importance in demonstrating the principal characteristics of a class of cultural places and objects.

WHY IS IT SIGNIFICANT?
The Stawell AMA Banner is significant at the State level for the following reasons:

The Stawell AMA Banner is historically significant for its association with one of the earliest unions in Victoria, the AMA. The AMA became part of the AMAA, Australia's first intercolonial union in 1884. The Stawell AMA was established in February 1872 and was the second miners union in Victoria, the first being Bendigo which was formed only one day earlier. The Stawell AMA Banner is important in demonstrating the union's political and social aspirations as well as the non-oppositional labour and capital ethos that was the defining feature of the first Australian gold mining unions. It is also important for its association with the Eight Hour Day Movement, one of the most significant nineteenth century industrial reforms. [Criterion A]

The Stawell AMA Banner is significant as a rare surviving example of an early twentieth century trade union banner which was a replica of an earlier banner. More than 200 union banners were produced in Victoria and the Stawell Banner is one of only twelve union banners known to have survived in Victoria. It is a rare surviving historical document associated with an early intercolonial trade union for which little documentary evidence survives. [Criterion B]

The Stawell AMA Banner is a notable example of the class of union banners. It is fine and highly intact example of a nineteenth century union banner and displays a large number of characteristics which are typical of the class, including the materials, use of symbolic and political images and mottos, and large scale and design. The design and sewing of the banner and the painting of the imagery and mottos are executed in a highly proficient manner. [Criterion D]