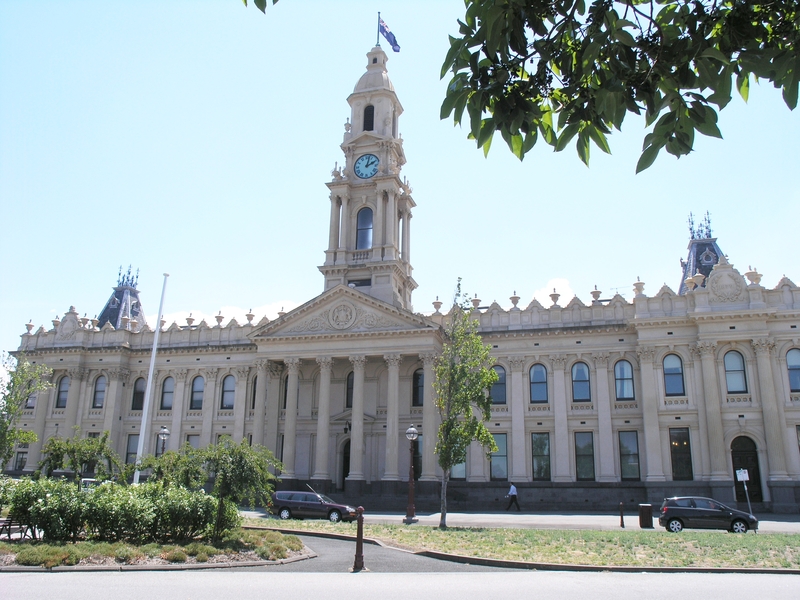 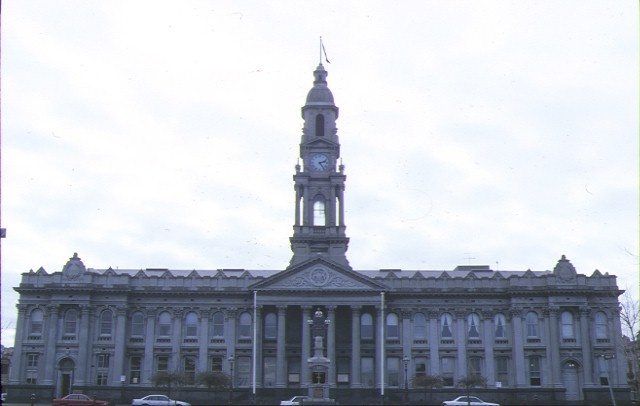 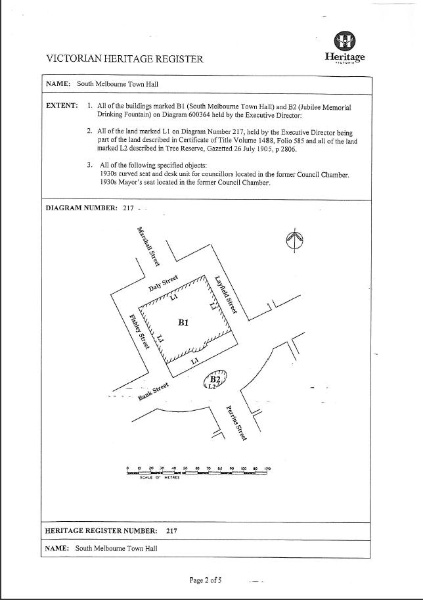 South Melbourne Town Hall, originally known as Emerald Hill Town Hall until the name of the municipality was changed in 1883, was designed by Charles Webb to house the Emerald Hill Town Council, Public Hall, Mechanics Institute and Library, Post and Telegraph Department, Police Department and Courthouse and Fire Brigade. It was built by Gillon and Treeby and officially opened on 30 June 1880.

A large turret clock was added to the clock tower in 1881. The interior was refurbished and additions made in the 1930s to designs by Oakley and Parkes, undertaken by builder G. Farnsworth and supervised by City Engineer A. E. Aughtie. The low mansard towers that originally flanked the central tower were removed in 1945. The Town Hall, built on an elevated site, in the Victorian Academic Classical style with French Second Empire features, is a rendered building featuring a wide facade with a central portico and projecting pavilions at each corner. The facade is dominated by a giant order Corinthian colonnade expressed as pilasters along the walls, fluted engaged columns on the pavilions and freestanding columns on the projecting portico with a triangular pediment embellished with the words 'Town of Emerald Hill' and the municipality's coat of arms. A tall tower with a cupola, mansard and Baroque colonnettes clustered at its base is centred behind the pediment. The side facades have detailing of comparable complexity to the front facade.

The Jubilee Fountain, situated in the forecourt, was designed by G H Henderson and built in 1905 to commemorate both the jubilee of the municipality and the 140 local residents who fought in the South African Boer War and the 8 who died. The tall, temple-like fountain is set on bluestone steps with granite columns and canopy, brass font and two bronze plaques. The fountain is surmounted by ironwork supporting three gas globes constructed in 1994 as a reproduction of the original design.

South Melbourne Town Hall is of architectural, historical and social significance to the State of Victoria.

Why is it significant?
South Melbourne Town Hall is of architectural significance as an outstanding example of a Victorian Academic Classical style building with French Second Empire influences. While the Bank Street facade with its giant order Corinthian portico displays a monumental symmetry, the east and west facades are also well resolved and the northern elevation features an accomplished articulation of the various functional elements contained within the complex. It is an important and sophisticated example of the work of architect Charles Webb, one of the leading architects of the 19th century. The Town Hall is further distinguished by its outstanding landmark and townscape qualities. Set on the crest of a hill with a forecourt, fountain, four street frontages and a framed vista to the portico and tower provided by the planning of Perrins Street, the building enjoys a prominent position unparalleled in Victoria. The interior, remodelled by Oakley and Parkes with some of the work carried out by Brooks Robinson, is a fine example of 1930s design incorporating blackwood panelling and a redecorated auditorium with special acoustic treatment and ventilation.

South Melbourne Town Hall is of historical and social significance as the civic centre of South Melbourne over a long period. One of Victoria?s grandest town halls, the monumental building symbolises the prosperity and confidence of South Melbourne last century when it was one of the first municipalities to be changed from a town to a city after the 1874 Local Government Act. The Town Hall has a long history as the centre of community cultural life. It was the first Town Hall to achieve an integrated municipal facility with a range of functions.

The Jubilee Fountain is of historical significance for its associations with the jubilee of the first working council outside Melbourne and Geelong. It is also of historical and social significance as a memorial associated with the Boer War in Victoria and symbolises the deep sentiments of the community towards this important event in Australian history. The importance of the fountain lies in the combination of associations with the Town Hall, the jubilee of the municipality and Boer War commemoration.