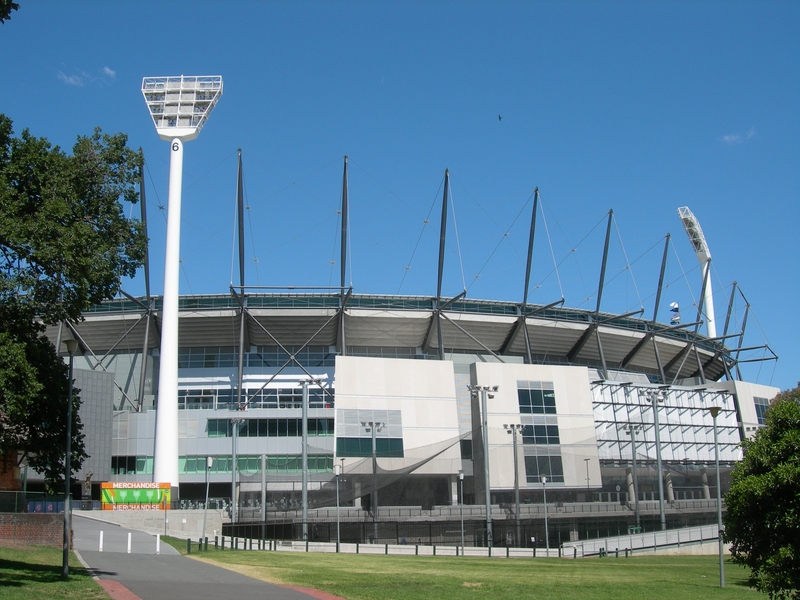 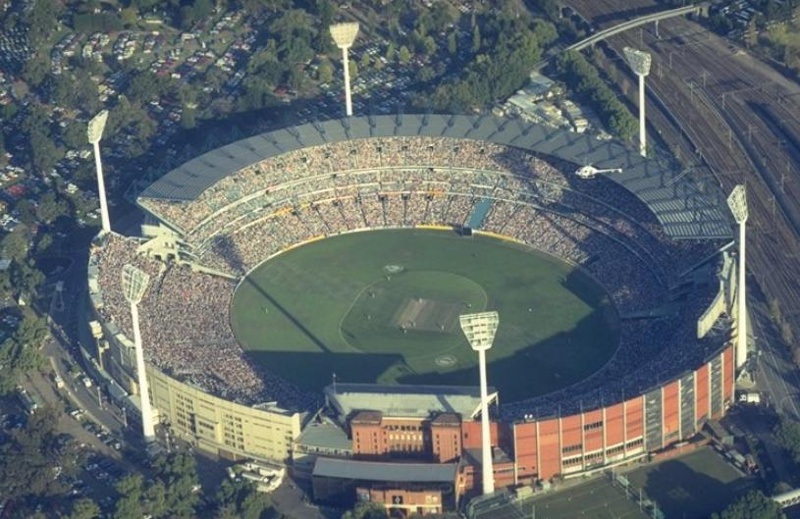 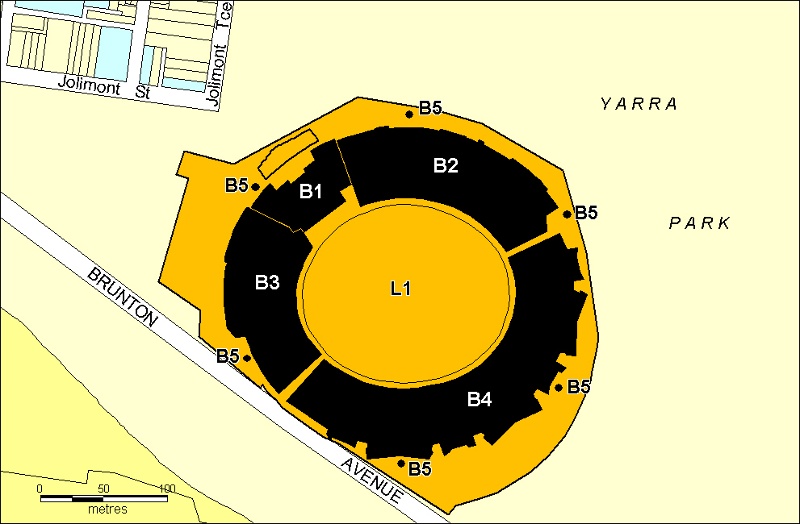 What is significant?
The Melbourne Cricket Ground was established in 1853 when 10 acres of land at Yarra Park in Jolimont was set aside for the use of the Melbourne Cricket Club, the purpose of the reserve being 'to promote the recreation and amusement of the people and ... to provide a site or place for the playing of cricket within the City of Melbourne in our said Colony.' Since 1862, the ground has been administered by a government-appointed trust (the MCG Trust) which continues to delegate its day-to-day management to the Melbourne Cricket Club. From its beginnings as a simple paddock-like ground with a modest pavilion and with limited grandstand and other facilities scattered around the perimeter, the Melbourne Cricket Ground has evolved and expanded through a process of phased redevelopment and renewal into a major piece of sporting infrastructure serving the metropolitan area and the State as a whole. Currently, the stadium comprises four principal stands, the MCC Members Pavilion (the third on the site, designed by Stephenson and Meldrum and completed in 1927), the Northern (Olympic) Stand (designed by AW Purnell and completed in 1956), the Western (Ponsford) Stand (designed by Tompkins, Shaw & Evans and completed in 1968) and the Great Southern Stand (designed by Daryl Jackson in association with Tompkins Shaw & Evans and completed in 1992), the oval, light towers (1984) and Australian Gallery of Sport (1986).

How is it significant?
The Melbourne Cricket Ground is of historical, social, aesthetic and architectural significance to the State of Victoria.

Why is it significant?
The MCG is of historical and social significance at a State, national and international level, as one of the oldest and largest capacity contained sporting venues in the world and one of the best-known of international cricket grounds, and as the pre-eminent venue for top-level cricket in Australia since the mid to late nineteenth century. Since the late nineteenth century it has also been the main venue and symbolic home of Australian Rules Football in Melbourne, making it of great historical and social significance in a State and metropolitan context, and - following the expansion of the Australian Football League to include interstate clubs - in a national context. The MCG is also historically and socially significant as the main venue and ceremonial focus for the 1956 Melbourne Olympic Games, and for its associations with numerous other sports and events.

The MCG is also of historical and social significance for its association with the Melbourne Cricket Club, the oldest club in Victoria and a major force in the development of cricket and other sports in Victoria from the nineteenth century. This association is reflected in the Members Pavilion, which is the third such pavilion constructed for the purpose. As well as being the repository of Victoria's cricketing traditions, the pavilion occupies the prime position for viewing events, particularly cricket, and allows members access to a range of private facilities such as the dining room and the long room.

In the broader context, the MCG is also of historical and social significance for its egalitarian image as the 'people's ground' and its long tradition of serving the people of Victoria. The MCG is socially significant as a living icon, a focus of attention in which importance lies in participating in events as well as experiencing the place itself.

The MCG is of aesthetic significance primarily for its overall form and scale. The MCG is a landmark on the edge of the city, a vast stadium which retains its traditional parkland setting. Whether full or empty, the stadium is of considerable aesthetic power and significance and is a place of energy and great atmosphere.

Within the broader conception of the MCG, there are elements with their own architectural significance. Firstly, the Members Pavilion by Stephenson and Meldrum (1927), is architecturally important as a large and relatively intact grandstand from the interwar period, although an appreciation of its impressive facade is marred by the somewhat intrusive Australian Gallery of Sport of 1986. Secondly, the Great Southern Stand by Daryl Jackson in association with Tompkins Shaw and Evans (1992) has been the recipient of a wide range of design awards and has generally been received with acclaim by architectural critics.
Show more
Show less
All information on this page is maintained by Heritage Victoria. Click below for their website and contact details.

In 2003-6, all these stands were demolished and replaced : B1 Members Pavilion B2 Northern (Olympic) Stand B3 Western (WH Ponsford) Stand, leaving only B4 Great Southern Stand, and the victorian era cast iron fence worthy of protection (and perhaps not the Great Southern Stand).

In fac the cast iron fence isn't noted at all let alone as significant. A reappraisal of the Great Southern Stand might see it determined as an interesting blend of post-modern, high-tech and brutalist influences.