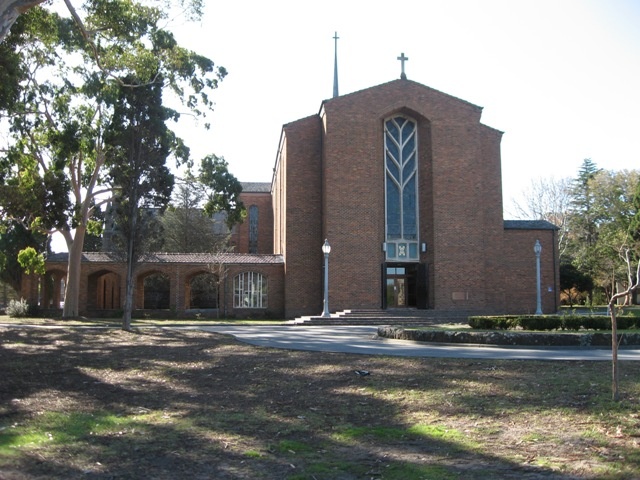 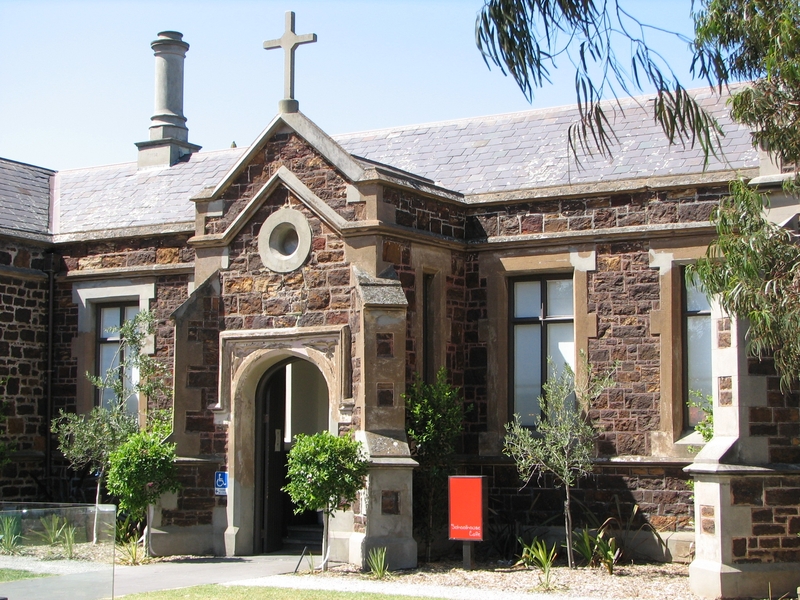 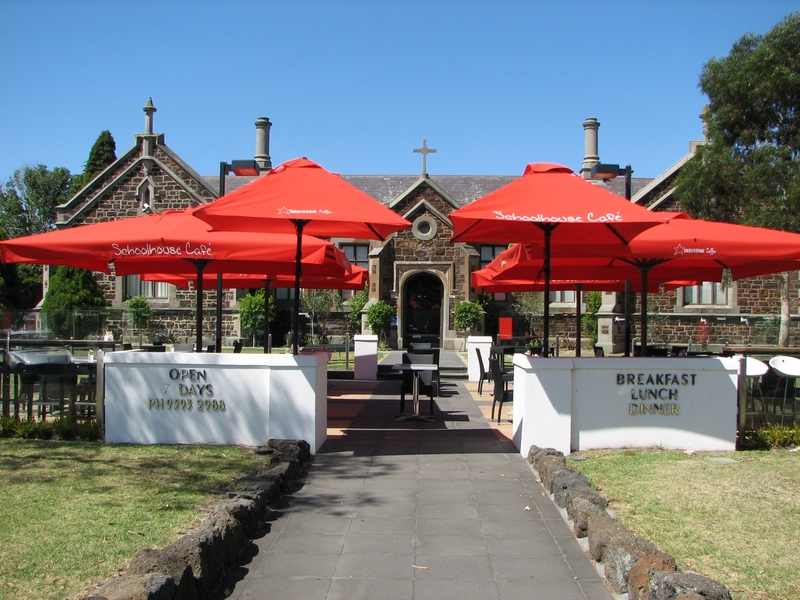 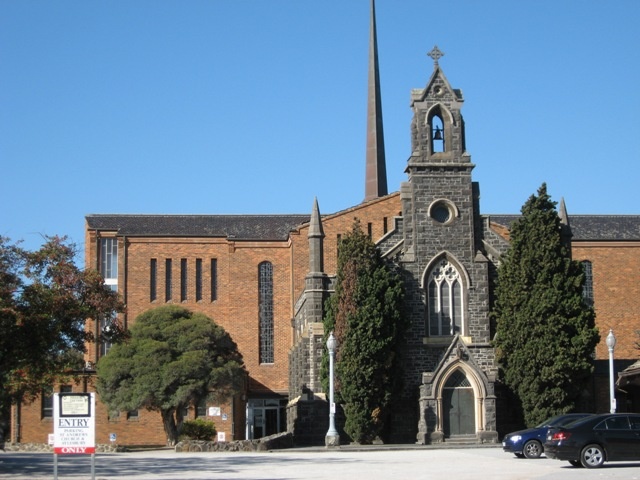 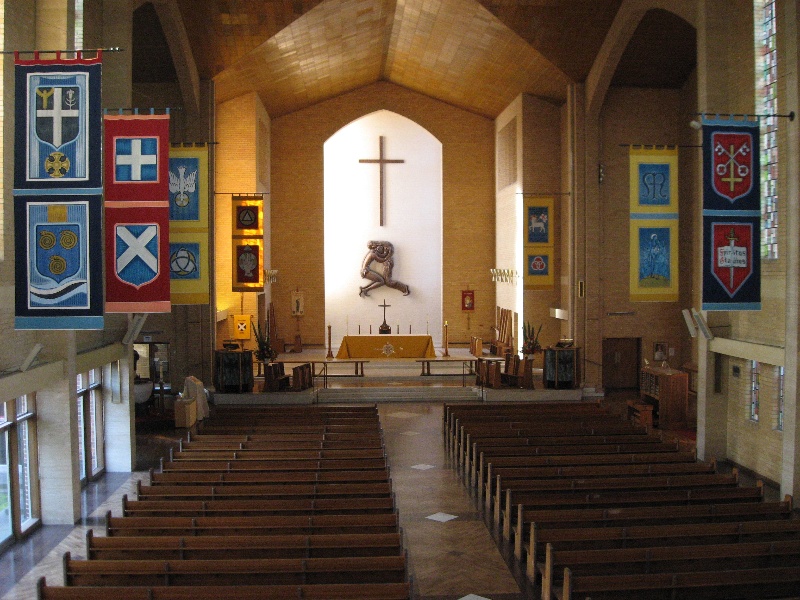 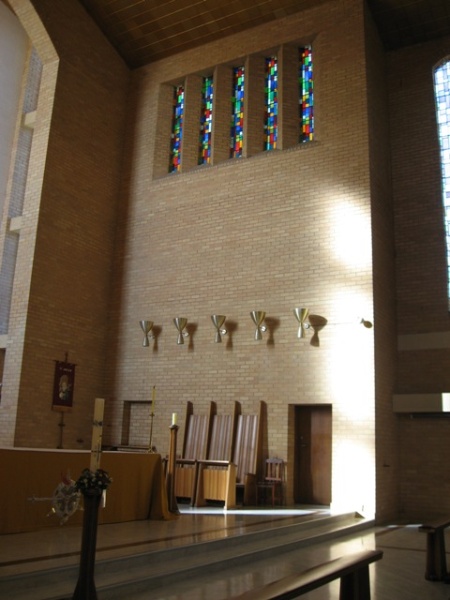 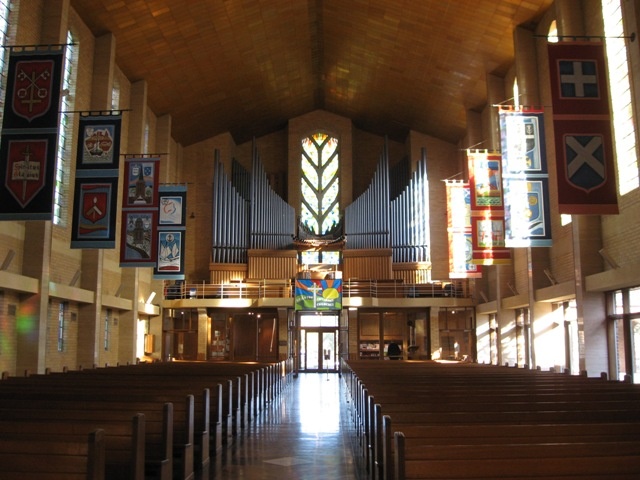 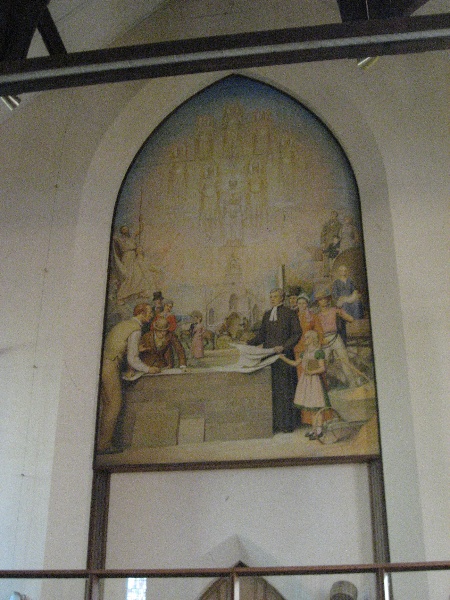 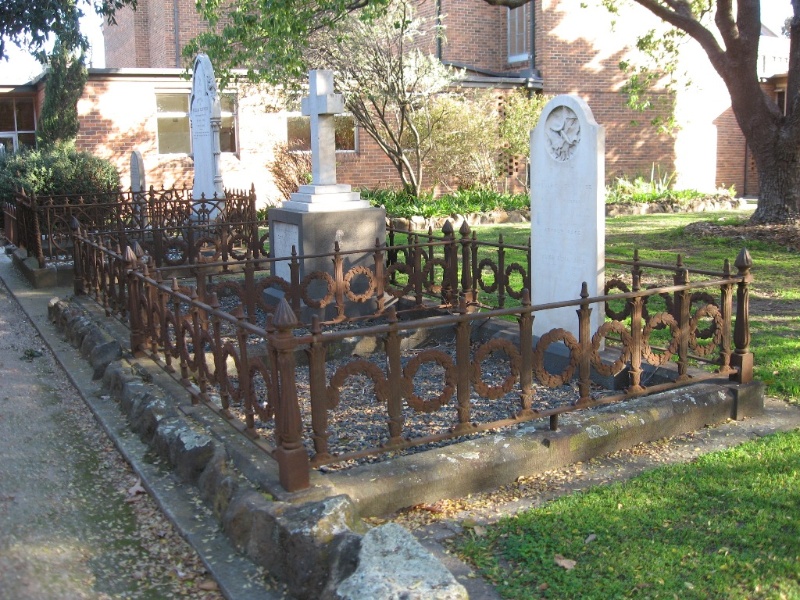 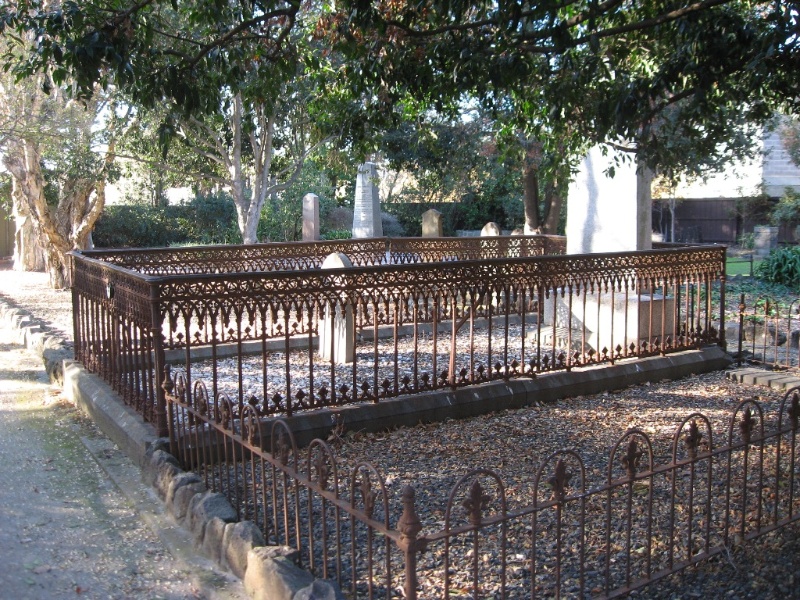 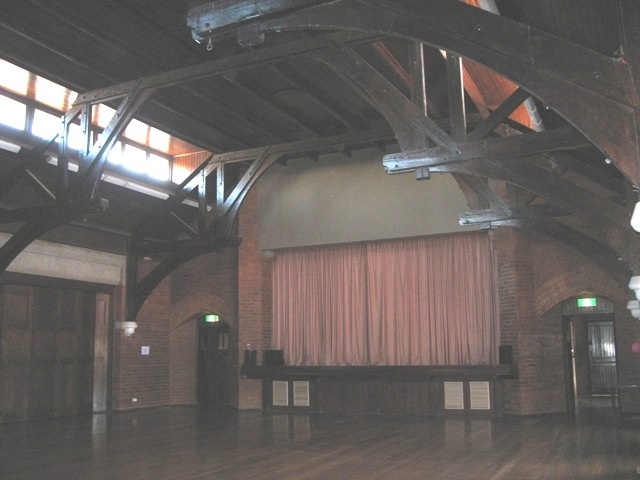 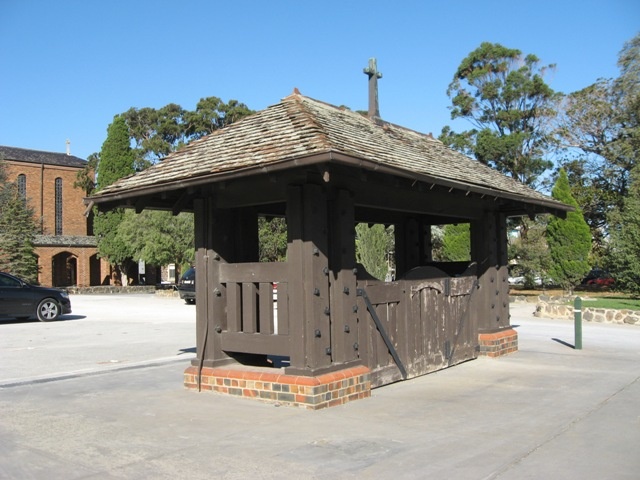 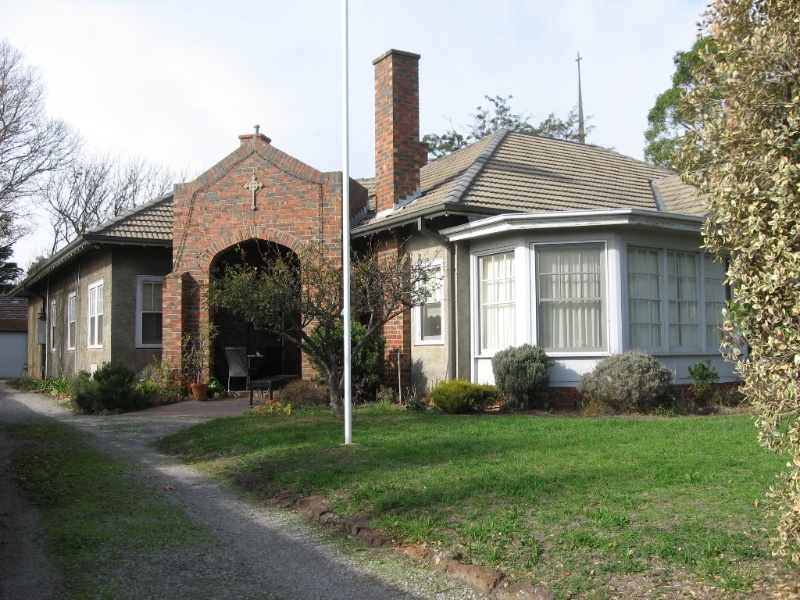 Ten acres of land were set aside as a Church of England Reserve in the Brighton Estate planned by Henry Dendy and J. B. Were in 1841. This site was located in a small township of fashionable crescents, between the outer crescent and desirable allotments which ran to Port Phillip Bay. An Episcopal Church, erected to the south of the site in 1842, was used as a church and school, however the formation of Church Street isolated it from the main site soon after construction. This site was not conveyed to the church in 1843 and subsequent development took place on the remaining land.

In 1843 a two acre graveyard, established to the north-east of the first building, was consecrated and the first burial took place the following year, well before the opening of the Brighton General Cemetery in 1855. More than three hundred burials took place, mostly before 1860, and the graves of many district pioneers are located in this graveyard. The last burial took place in 1948, however an adjoining garden of memory, established in the 1950s, remains in use.

An ironstone church, designed by architect Charles Laing, was erected to the north-west of this graveyard in 1850. By 1857 the congregation had outgrown this building and parishioner and architect Charles Webb, and his partner Thomas Taylor, were commissioned to design a new bluestone church, school house and vicarage. The 1850 church was demolished and some of the stone used in the construction of the T-shaped school house building. This school continued to operate until 1875 when students were relocated to a new school in Brighton. The school house was then used for Sunday School and other church activities.

In the subsequent years Brighton developed as a popular middle class suburb and by 1886 necessary additions were made to the church. Large sandstone transepts and a chancel were added to the existing bluestone church nave by architect Lloyd Tayler. A north wing was also added to the school house, creating a symmetrical H-shaped building. This was either undertaken in 1866 by Charles Webb or in 1886 by Lloyd Tayler. Webb called tenders for additions to the Church of England schools in Brighton that year, and this may have been this addition. Designed in a Gothic Revival style, the symmetrical school house is constructed of random coursed, locally quarried ironstone and is roofed in slate. It has projecting gabled end wings, a central projecting entry porch and render detailing that includes parapets, finials, angle buttresses, window and door surrounds and gable vents.

The St Andrew's parish hall, designed by architect Louis Williams, was built to the east of the school house in 1925. The Arts and Crafts influenced building is constructed of clinker brick and the symmetrical front facade contains a broad central gable roof with central jerkinhead bellcote. The exposed brick interior of the building contains oversized timber hammer beam trusses and large folding timber doors which line both sides of the central hall. All timber work remains unpainted.

At this time Brighton Grammar School, established in 1882, received in trust five acres of the original ten acres of land granted to the Church of England in 1841. A school building designed by architects Hudson and Wardrop, was constructed to the east of the church, and Brighton Grammar moved to the new site in 1927. The school used the 'cow paddock' to the north of the church and graveyard for a sports ground from about 1928. A very close affiliation was then established between St Andrew's church and the school.

The original vicarage, located north of the church, was demolished in 1928 and was rebuilt further south on the site of the 1850 church. Detailing would suggest that Hudson and Wardrop may have also designed this new vicarage. A lych gate was erected to the west of the church after the death in 1926 of George Jefferson, a vestryman at St Andrew's. This rustic timber structure, with hipped terracotta tiled roof, shows the influence of the Arts and Crafts movement, and may have been designed by Louis Williams.

In 1961 a fire destroyed much of the church at St Andrew's and parishioner, and prolific church architect, Louis Williams was commissioned to design a new church. He incorporated the remaining portion of Webb's bluestone nave as a chapel, and designed a vast building capable of holding a large congregation. At the time it was anticipated that St Andrew's was to become the cathedral church for the Mornington Peninsula Diocese when the Melbourne Diocese was divided. This church building was dedicated in December 1962 in the presence of the Governor of Victoria, Sir Dallas Brooks; the Archbishop of Melbourne, Frank Woods; clergy and two thousand people.

Williams' design re-orientated the church by setting a new nave, of some sixty metres in length, at right angles to the surviving portion of the 1857 building. This Early English Gothic section, typical of the work of Charles Webb, was reduced in length and used as a Pioneer Chapel and baptistery, and linked to the narthex of the new building by an arcaded cloister. The symmetrical west facade, with its gable belfry, bracketed string course, triple lancet windows and pinnacled corner buttresses, has therefore been retained.

The new church is simple in form with a shallow gable roof, surmounted by a narrow, copper spire, covering a textured red brick building. Pointed arch headed openings are used to convey a Gothic character. The interior employs cream bricks, anodised aluminium acoustic ceiling tiles and blue vinyl flooring (since replaced). It features subdued window glass, banks of singularly placed aluminium uplights either side of the sanctuary, a gallery organ and war memorial surrounds, an echo organ and timber furniture designed by Williams and crafted by the well established Melbourne furniture maker, Fallshaw and Sons. Tasmanian oak, fumed, stained and hand finished, was used for the large array of furniture. Pulpit and lectern panels were created by Reine Slagmolen to designs by William using a blue 'polylite' material and Napier Waller was commissioned to design a mural for the Pioneer Chapel, which replaced the former west window.

Many of Louis Williams' ecclesiastical design ideas are apparent at St Andrew's church. His desire for generous planning is manifest throughout the church with well spaced pews, a clear view of the altar, wide aisles, a spacious sanctuary and a choir gallery at the rear with a spacious narthex below. A windowless sanctuary end, lit by concealed side lighting, was also favoured by Williams. Originally intended to contain mosaic work, this recess now features a bronze sculpture of the prodigal son, by Guy Boyd. It was installed in 1987, the new church's twenty fifth anniversary.

Other developments on the site include the addition of tennis courts, probably early in the twentieth century, and the construction of two brick houses adjacent to the graveyard and an opportunity shop between the school house and the parish hall in the 1980s.

How is it significant?
TheSt Andrew's Church of England Precinct, Brighton is of historical, architectural and aesthetic significance to the State of Victoria.

Why is it significant?
TheSt Andrew's Church of England Precinct, Brighton is of historical significance as an extensive and highly intact church complex which has associations with the early history of the Anglican Church in Victoria. It contains a graveyard, school house, church, parish hall, lych gate and vicarage which are all significant and intact contributory elements from the nineteenth and twentieth centuries. Together they demonstrate the development of a significant Anglican church site, which was destined to be the cathedral centre of the proposed Mornington Diocese if the anticipated division of the Melbourne diocese had occurred.

The graveyard at St Andrew's, Church of England, Brighton is of historical significance as an extremely early, pre-gold rush parish church graveyard and as a rare surviving example in suburban Melbourne. Other examples were established later and include Scots Presbyterian Church graveyard, Cambellfield (VHR H0127, 1855) and St Helena Church Cemetery, Greensborough, 1856.

The graveyard at St Andrew's, Church of England, Brighton is of historical significance for the tombstones of early Victorian pioneers and prominent citizens, and their families, contained within it. These include Jonathan B. Were, leading merchant and agent and founder of J. B. Were and Son (d. 1885); Henry B. Foot, surveyor and planner of the Brighton township (d. 1857); William A. Brodribb, pastoralist and politician (d. 1886) and Thomas Higinbotham, chief engineer of the Victorian Railways (d.1880). The retention of a wooden memorial headstone (date unknown) is of significance.

The school house at St Andrew's, Church of England, Brighton is of historical significance as a rare surviving example of a substantial early denominational school building.

The school house at St Andrew's, Church of England, Brighton is of architectural significance as one of the few surviving examples of Charles Webb's distinctive institutional buildings and as a rare example of a building constructed of local ironstone.

The church at St Andrew's, Church of England, Brighton is of architectural significance for the section of building which survives from 1857. This is a fine example of the distinctive ecclesiastical work of prolific Melbourne architect, Charles Webb, who was a parishioner of the church and designed such buildings as the Royal Arcade (1869,VHR H0023) and the Windsor Hotel (1884, H0764) and many churches in Victoria.

The church at St Andrew's, Church of England, Brighton is of architectural significance for the highly intact section built in 1962 and designed by the parishioner and highly prolific church architect, Louis Williams. Williams, who was Victoria's, and possibly Australia's, major ecclesiastical architect of the Arts and Crafts tradition from the 1920s to the 1970s, designed more than 130 churches, including cathedrals, for every diocese in Victoria as well as every State of Australia. As one of his later works in which he designed and supervised every aspect of the job, St Andrew's is considered as amongst his greatest achievements. It has significance as an example of a modern/traditional building, which exhibits both the lightness of modern architecture and the clear expression of its purpose as a church.

The parish hall at St Andrew's, Church of England, Brighton is of architectural significance as an intact and early example of the work of Louis Williams in an Arts and Crafts manner. It presents a particularly fine interior with exposed brick (painted over then sandblasted) and extraordinarily oversized hammer bean trusses which create a highly distinctive character. The lych gate is also a fine example of a structure designed in the Arts and Crafts style.

The church at St Andrew's, Church of England, Brighton is of aesthetic significance for the furniture and fittings throughout the church which were designed by Louis Williams and manufactured by the established firm of Fallshaw and Sons. This extensive and intact assemblage of meticulously detailed, modern timber church furniture is highly significant. The blue 'polylite' lectern and pulpit panels, aluminium sanctuary uplights, the font, the war memorial organ and echo organ are also of note.

The church at St Andrew's, Church of England, Brighton is of aesthetic significance for the mural created by important artist, Napier Waller and the later bronze sculpture by artist, Guy Boyd of the well known Melbourne Boyd family.