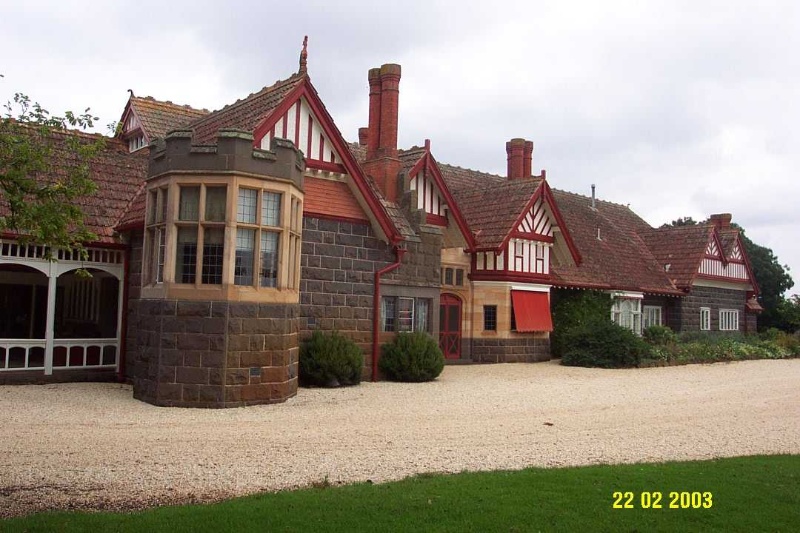 What is significant?
Blackwood Homestead Complex and Private Cemetery is located on the Dunkeld - Blackwood Road, eight kilometres north east of the township of Penshurst. The separate elements of this complex are the original two roomed bluestone homestead, constructed after 1842; a second bluestone homestead built in 1864; a private cemetery; a bluestone and timber woolshed, the current Blackwood homestead, stables and coach house (constructed in 1891) and four acres of garden and parkland (dating from the same period as the current homestead). The current homestead and stables were designed by prominent architectural firm, Butler and Ussher in 1892 and constructed within 18 months by local contractor Charles Hosking for Robert Blackwood Ritchie, the nephew of James Ritchie, who took up the Blackwood run in partnership with James Sceales in 1843. The homestead and stables are set in a large simply laid out typical late nineteenth century garden, with a simple perennial plantings immediate to the homestead, large stretches of lawn and curved beds of shrubs, with a carriageway curving through the garden to the front of the homestead, finishing in a circular turning area adjacent to the front of the house. A low stone wall encircles the garden to the south and west, with exotic specimen trees forming a park on the slopes below the homestead.

The original Blackwood Homestead, a simple two-roomed bluestone cottage, is located constructed of bluestone. The cottage is believed to have been built for James Ritchie between 1843 and his accidental death in 1858. The second Blackwood Homestead, a substantial eight-roomed bluestone villa was designed by James Ritchie's successor, his brother Daniel in 1864. The homestead was to house their growing family when they returned from a visit to Scotland in 1864. The second homestead was never used as a residence, as Daniel Ritchie suddenly while in Scotland in 1865, aged 49. The homestead has been used as a Shearer's quarters since the 1870s.

How is it significant?
Blackwood Homestead Complex and Private Cemetery is of Architectural and Historical Significance to the State of Victoria and the Southern Grampians Shire.


Why is it significant?
The current Blackwood Homestead and Stables of Architectural significance as the best example of the Picturesque Aesthetic as an architectural style in the Southern Grampians Shire. Of further architectural significance are the architects, the influential partnership of Butler and Ussher, who operated from Melbourne in the late nineteenth century. The architectural feature of a long single storey gabled composition of the main building gives a distinctly Australian character to an architectural idiom derived principally from contemporary English works (NER). Blackwood Homestead complex is of historical significance as it demonstrates three separate homesteads which were built as demonstrations of the increasing pastoral fortunes of the Ritchie family. Further historical importance is attached to the complex for the long association with the Ritchie family, many of whom are buried in the private cemetery.
Show more
Show less
All information on this page is maintained by Southern Grampians Shire. Click below for their website and contact details.