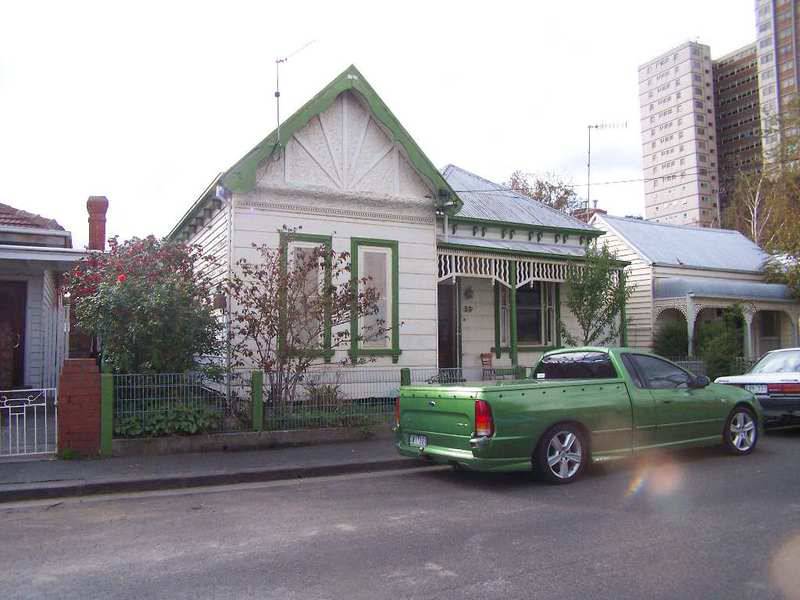 What is significant?
The house at 33 Smith Street, Richmond is significant to the extent of the Edwardian fabric. It is a double-fronted, timber clad house dating to the early Edwardian period. Unusually, the two bays have separate roofs. The upper gable is roughcast, with radiating timbers and a bellied base, with scalloped flashing over a dentilated cornice. The barge is scalloped, with inscribed quatrefoil pendants. The windows are as a pair. The front has ashlar lining. The right bay has spindle-bracket pairs, between roundels and panels in the frieze. The convex verandah is in the angle. It has a dentilated cornice, with wavy palisade valence, angled as brackets with pendants. The tripartite window has diamond lozenge mullions.

Alterations and additions made to the house after 1940 are not significant.

How is it significant?
The house at 33 Smith Street, Richmond is architecturally and aesthetically significant to the locality of Richmond and the City of Yarra.

Why is it significant?
The house at 33 Smith Street, Richmond is architecturally and aesthetically significant (Criterion D & E) as anEdwardian detached house, which is notable for some uncommon and unusual elements such as the separate roofs to the two bays, details to the verandah and gable end.