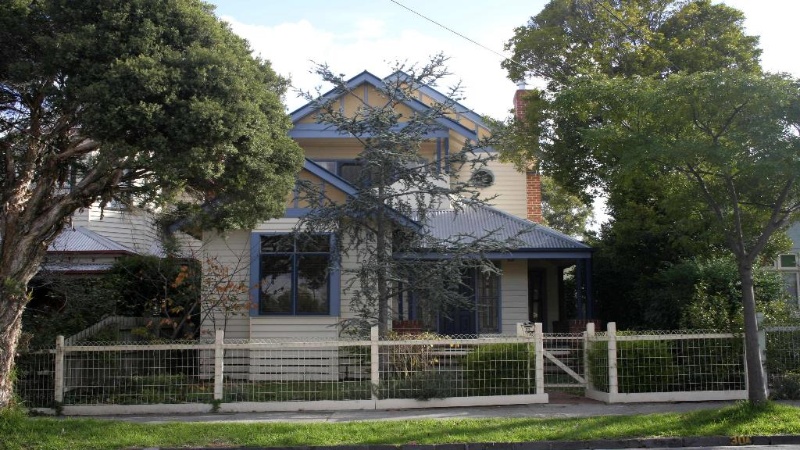 This area has arisen from the urbanisation of the rural Crown Portions sold in 1840, including 118 (Dowling), 119 (G Howitt), 120 (Roemer), and 121 (Thomas Wills), each with a narrow frontage to the Yarra River. The village of Heidelberg and later the Diamond Creek gold fields created heavy traffic along the Heidelberg Road, with the Heidelberg Road Trust formed to maintain coach and wagon access to, at first, the rich pastoral properties in the Heidelberg district (see Banyule). A bridge was constructed over the Merri Creek, replacing the 1848 causeway in 1854, and a timber bridge replaced the ford, at the Darebin Creek, four years later. A toll bar was erected under the aegis of the Trust, in 1847, at the Yarra Bend turnoff; the Heidelberg District Road Board replaced the former Trust, under the Central Roads Board, in 1854.

The Alphington Village south of the Heidelberg road was created from Charles William Roemer's original Crown Portion 120, of 1840. James Manning purchased the lot from the Sydney-based Roemer in 1841, completing the purchase in 1852. Two years later, William Montague Manning, who was Solicitor General of New South Wales, and James' brother, began selling village allotments along the Heidelberg Road and large pastoral lots near the Yarra River and the Darebin Creek. The shops at 750-756 Heidelberg Road and the former Methodist Church (1859- City of Darebin) are all that remain of the old Alphington Village of the 1850-60s.

Subdivision and the rows of cottages became a common thing in the inner suburbs as the 1880s advanced, despite the area's lack of fixed-rail transport. The Yarra-side and hillside allotments could still, however, attract those gentlemen who owned a carriage. Hence when C.B. James and Percy Dobson released their Fulham Grange estate (the former Perry Brothers' orchards), they proclaimed that the acre lots on the Yarra were 'ideal for Gentlemen's Residences'. The Street James Park estate, formed around Alphington Street and Park Crescent, was also launched in the late Victorian era. Meanwhile gas companies distributed their domestic gas supply over an ever wider area: the Northern Gas Co. was floated in 1887 and the Heidelberg Gas Co. commenced laying mains, in 1889, as the Heidelberg, Ivanhoe, Alphington and Fairfield Gas Co. A remnant of the gas company may be seen north of the Darebin Creek Bridge, comprised of the concrete base for the gas container. Reticulated water was extended to Alphington in 1887.

The Clifton Hill to Alphington line, isolated as it was, was built in 1883 but this was the only gesture from a Government which had been extending lines in every other direction across the Colony. It was not until 1889, near the end of the land boom, that a branch railway line was extended from Royal Park to Preston and later to Whittlesea, as well as across to the marooned 'Nowhere to Nowhere' line from Clifton Hill to Alphington. A new line was built from Clifton Hill to Princes Bridge 1901 to allow more direct rail access from Alphington and Fairfield to the growing City of Melbourne and its industrial heartland in Richmond and Collingwood. Hence it was the Edwardian-era that allowed the potential for houses to be built in the Alphington area, often in the Queen Anne or Federation Bungalow Styles. This was followed by the short lived catch-up house boom, after the First War, in the Californian Bungalow style.

The prophetically named Alphington Railway Estate (-1887) celebrated the arrival of the railway terminus, some four years late, but one year earlier than the extension of the railway line to Heidelberg. The Knockando Estate resubdivided Manning's original large rural lots into suburban sites in the same year, adding streets such as Foulkes' and Adams' to canonise these two pioneering families of Alphington.

When the Melbourne and Metropolitan Board of Works Detail Plan 1319 of the Alphington area (then Shire of Heidelberg) was published in 1911 it showed most of today's suburban allotments but few buildings, with most located just south of the main transport route, being Heidelberg Road, or down near the Yarra River, on the south side of the distinctively shaped Roemer Crescent and a house at the end of today's View Street (1 View St). On blocks, originally established by Manning's subdivision of Roemer's Crown Allotment next to the Yarra River, a group of large houses was built by a wealthy class consisting predominantly of iron mongers, such as William Delbridge and John Enticott. This crescent shaped street was meant as the focus of the estate, maximising views across the water. The rest of the subdivision was still grassland, with principal streets of Lucerne Crescent, Yarra Lea, Como, Banks (later Lucerne Cr extended). Then, most of Alphington's population lived on the west side of the Outer Circle Railway (now Chandler Highway).

The enduring rural character, particularly east of the Outer Circle, appears to have attracted artists and artisans who built riverside villas in the late 19th and early 20th centuries, in parallel with those of the famed Heidelberg school who practised their art further east and north along the Yarra River. One was the painter, William Mclnnes who purchased one of the Lucerne South estate lots facing the Yarra River and constructed 54 Lucerne Crescent in 1919 to the design of the much celebrated architect, Desbrowe- Annear.

The Alphington East Residential Heritage Precinct is made up of a number of residential sub-areas that share a combined character arising from some late Victorian-era houses, many weatherboard Edwardian-era and a large number of weatherboard inter-war houses. The precinct sub areas are in View and Riverview Streets, Como Street, Lucerne Crescent, Yarralea Street and Saint Gothards Streets. The subdivision was incremental but has some distinctive elements including the semi-circle of Roemer Crescent, fanning out to Yarra River views. This circle attracted the earliest villa development. Other streets gain distinction from their river or park side setting. Existing individual heritage overlays, such as Balclutha (Heritage Overlay 68) in Como St, provide key elements central to or adjoining the Heritage Precincts. Significant houses in key architectural styles within the areas include the Federation Bungalow style Darrabyn in Como St, number 2 Lucerne Crescent with its distinctive verandah detailing, the Californian Bungalow style 41 Como St, the distinctive design at 59 Yarralea Street with its slatted porch in a sunburst pattern, and another unusual porch at 93 Lucerne Crescent. The artistic theme in the area is illustrated by the William Frater house at 56 Lucerne Crescent and the William McInnes house (HO74): both significant artists in Australia.

Central to the residential estate is the Alphington State School which opened there in 1924, matching the intense inter-war housing development adjoining.

The small commercial and civic node in Heidelberg Road is complementary to this area as an indicator of the early rural origins of the Alphington district.

The main development period evident in the heritage overlay is that of the Edwardian and inter-war periods, with a contribution from individually significant places of all eras.

. corrugated iron, with some slate roofing (Edwardian-era and Victorian-era);

. chimneys of face red brick, with capping course, or stucco finish with moulded caps or of matching face brickwork with corbelled capping courses;

. less than 40% of the street wall face comprised with openings such as windows and doors, framed as single vertical rectangles or groups of vertical rectangular frames; and

The Alphington East Residential Heritage Precinct is aesthetically and historically significant (National Estate Register Criteria E1, A4) to the locality of Alphington and the City of Yarra.

. As a residential enclave, physically contained by the early transport route of Heidelberg Road and the natural barrier of the Yarra River, which was built up in the late Victorian-era and early 20th century as consistent and well preserved house groups in the Italianate, Federation and Californian Bungalow suburban styles, differing to most other parts of the City by their garden setting and deep garden setback;

. For the distinctive street layout arising from Manning's early Alphington village subdivision, with its curving base in the form of Roemer Crescent at the Yarra River; and

. For the artistic associations of the area as the chosen domain (along with the adjoining Ivanhoe and Heidelberg areas) of many prominent artists and businessmen linked with art and artisan pursuits from the late 19th and early 20th centuries.