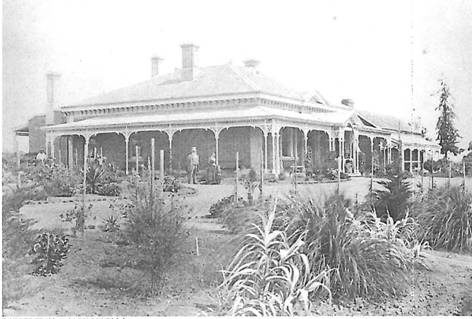 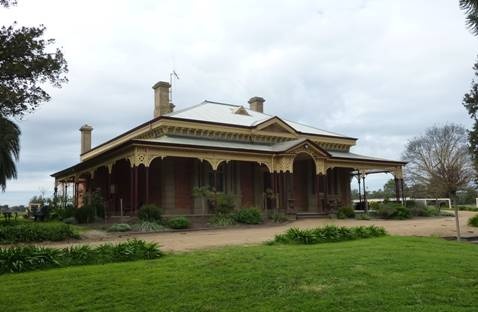 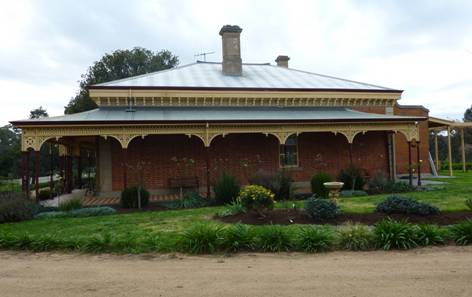 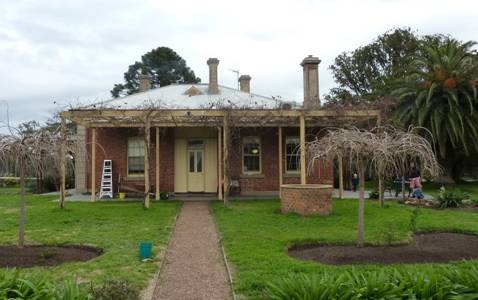 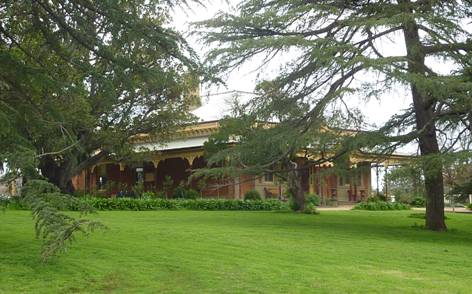 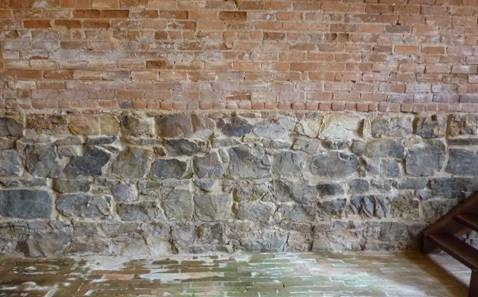 Park View, at 1810 Alternative Calder Highway, Marong, comprises an early 1880s symmetrical Italianate villa in landscaped grounds with an outbuilding, possibly dating to the 1860s, at the rear of the main house. It is approached along a gravelled drive, with a timber bridge over Bullock Creek. The house is broadly square in plan, and has a single-hipped roof clad in corrugated galvanised steel, with a gablet vent, a second gable on its rear elevation, four stucco rendered chimneys, and boxed eaves. The west eave is broken by a breakfront pedimented gable above the verandah and on axis with the entrance below. The verandah, which is attached just below the eave bracket line, wraps around three sides, has a concave roof and an iron frieze. The house entrance under the verandah is fronted by an arched breakfront porch. External walls are of exposed red-umber face-brick, the windows being original timber-framed double-hung sashes. The front windows are set in cement-rendered rectangular-plan bays with two narrow sidelights in each, and with cement-rendered apron sills. The front door is treated similarly, but with sidelights set integrally in the door-case. The main corners are in rendered cement and shaped as quoins. The whole building has a circling stone base.

The stone outbuilding at the east of the site may incorporate elements of one of the 1860s outbuildings. This structure has brick with pink and tan-brown colouring characteristic of central Victoria in the 1860s; a rear component dug out to c. 1.5m below grade; and a random (irregular) rubble footing in what appears to be local sedimentary bluestone. The garden layout is on the same general lines seen in the early 1880s photograph. Several trees, including Moreton Bay fig trees, monkey puzzles (araucaria) and other conifers, are long-standing and appear part of the original garden design. Other borders were replanted with agapanthus, a favourite early twentieth century planting.

Park View is of local historic and aesthetic/architectural significance.

Park View is historically significant (Criterion A) for its association with the development of Marong, particularly with later development in the area by a locally notable and prosperous family. It is able to demonstrate an aspect of goldfields life, whereby a relatively small number of affluent families, who typically had made their fortunes in gold, lived in palatial villas in extensive landscaped gardens. The present property (believed to date to the early 1880s) superseded an earlier (1860s) structure at the site, reflecting the increasing wealth of its owner Thomas Glover, who had the resources to commission the design of his house from the prolific and fashionable Bendigo architects, Vahland and Getzschmann. Park View is also significant for its association with the leading Bendigo architectural practice, and is an example of their residential work in an oeuvre which included many important public, civic and commercial buildings in the municipality. The association with Glover is additionally significant; he migrated from Ireland in 1854 and went on to become a local person of note, being a mining speculator, successful farmer and local councillor/politician (Criterion H).

Aesthetically and architecturally (Criterion E), Park View is significant as an example of the work of the noted Bendigo architects. It is a bold, confident design reflecting the opulence of the era and the wealth of owner. It can also be seen as a transitional design, between the last phase of Italianate's dominance in the 1880s and the onset of Federation around 1887-90. The house is largely intact as built and notable elements include the complex verandah frieze including the lacework quadrants; the grouped verandah columns; and the breakfront verandah form. Modifications have generally been of a sympathetic nature. The aesthetic significance of the property is also enhanced by the landscaped garden setting, including the Moreton Bay fig trees, monkey puzzles (araucaria) and other conifers.