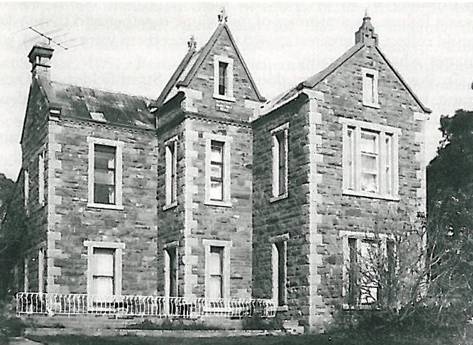 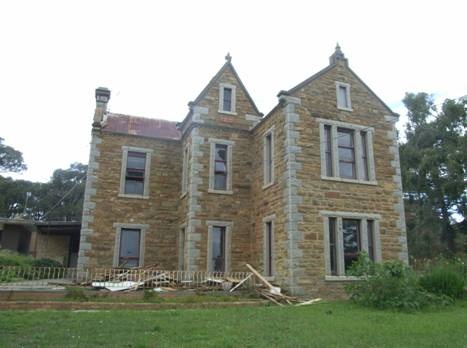 Rocky Vale Villa is a rustic Gothic Revival two-storey house built of sandstone and granite, on a 'L' shaped plan with an engaged tower at the junction of the two gabled wings. The principal elevation faces north. The front door is to the east face of the tower, which has a more steeply pitched roof than the two wings. The tower's gable ends have copings, skew corbels over dressed stone quoins, fleur de lis finials in the Gothic manner and a small cartouche reading Rocky Vale Villa. The two wings, with comparatively shallow pitched roofs, also have copings to the gable ends. The roof areas are clad with corrugated galvanised sheet steel, which is not original. The coursed stonework incorporates granite heads, sills and architraves to the windows and gable vents, and granite quoins. The windows have stone block sills, lintels, mullions and architraves. There is a domed well in the yard. The property has limited prominence in the local landscape due to its location at the end of a private drive.

The mid to late 20th century, brick veneer additions in the rear of the building, both attached and freestanding, are non-significant and detract from the interpretation of the place.

Rocky Vale Villa is of local historical and aesthetic/architectural significance.

Rocky Vale Villa is historically important in the local context (Criterion A). It is associated with English stonemason William Beebe Snr, who built the property of locally quarried sandstone and granite over a period of almost 20 years from the early-1870s. The residence is testament to the skill and perseverance of its builder, who died the year the house was completed (1891). Beebe' stonework is found at cemeteries throughout the Bendigo area. The property is also associated with two of Beebe's sons, William and John, who were also local stonemasons and architects, with John eventually forming a partnership with noted Bendigo architect, William Vahland; and William later becoming Mayor of the City of Bendigo (Criterion H). Rocky Vale Villa is a rare local example of a substantial two-storey stone house built in the picturesque Gothic Revival mode, a style commonly found in parts of New South Wales and Victoria from the 1840s until the 1870s (Criterion B). Architecturally (Criterion E), the main north elevation is essentially intact as completed in 1891. Detailing of note includes the engaged tower at the junction of the two gabled wings, the pitched roof forms, stone quoins, and fleur de lis finials, and the coursed stonework which incorporates granite heads, sills and architraves to the windows and gable vents. While there are more adventurous and inventive nineteenth century Gothic Revival dwellings (including outside the municipality), Rocky Vale Villa is particularly focussed on the detailing and basics of stone construction. This is perhaps not surprising given William Beebe Snr's profession as a stonemason.