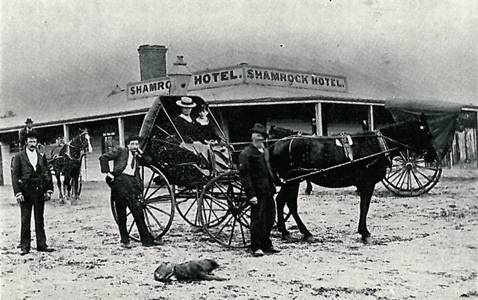 The original Shamrock Hotel, undated, viewed from the north-east. 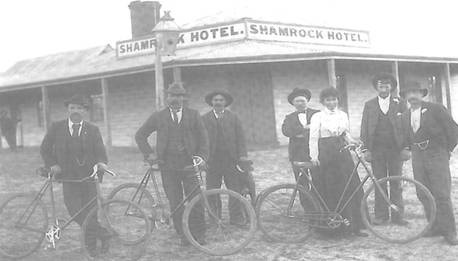 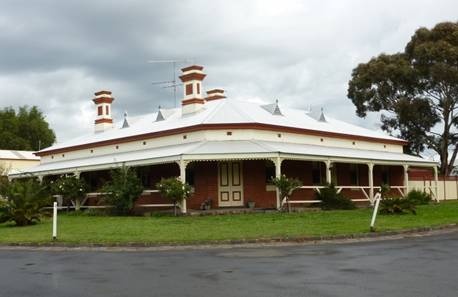 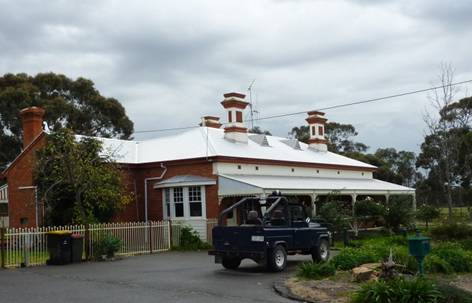 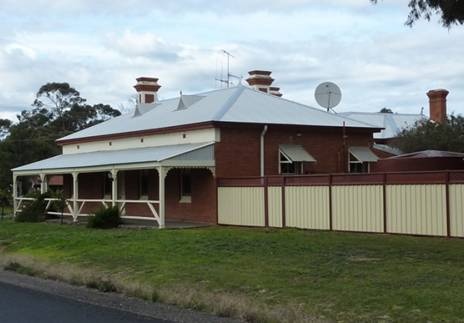 The former Shamrock Hotel and Store, built c. 1904, is located at the corner of Whewell and Miller streets, Neilborough. It is a substantial single-storey Federation-era brick building with stucco trimmings, on a broadly 'L'-shaped in plan, and with a shallow setback to both Miller and Whewell streets. Another brick wing, which may have been the original residential quarters, extends towards the south from the cavity of the 'L'. The hotel, which is built on a stone plinth, has a corner splay, and a timber posted verandah with Arts and Crafts influenced brackets, to the north and east elevations. A band of light coloured stucco runs above the verandah line. The hipped roof is clad with corrugated galvanised sheet steel, and has pairs of triangular roof vents with metal shamrocks fixed at the apex of the vents, to the north and east roof planes. There are three tall and elaborate chimneys of cement rendered brick with prominent bases and mouldings visible from the street, with a fourth less ornate chimney to the rear wing. Window openings are timber double-hung sashes. In addition to the door to the corner splay there is an opening to the east elevation which was possibly the entrance to the former store. The present building retains a number of characteristics of its 1860s timber predecessor, including an unusually tall brick chimney, corner splay, verandahs to the north and east and triangular roof vents.

The former Shamrock Hotel and Store is of local historical and aesthetic/architectural significance.

The former Shamrock Hotel and Store is historically significant (Criterion A) for being associated with the site of a hotel on this corner since 1862, soon after the rush to Elysian Flat (Neilborough), which began in 1857. In the late-1850s there was a population of around 2,000 at the township and 50-60 stores. The present structure was built c. 1904 following a fire to its predecessor. It was used as a hotel and store until World War II. The former Shamrock Hotel and Store is now one of the last surviving (former) commercial buildings in the township. It was also associated with the local Crapper family, with convict antecedents, from the 1870s to the 1920s. The former Shamrock Hotel and Store is also of aesthetic/architectural significance (Criterion E). It is a large and essentially intact Federation-era building located on a prominent corner site in the township. The building is distinguished by its unusually tall and particularly elaborate chimneys. The contrasting 'blood and bandage' colouration of the brick and stucco, and the skillion-roofed verandah are characteristics of the era. The Shamrock, which replaced a fire-razed predecessor, unusually retained some characteristics of the original building, including prominent chimneys, a corner splay, verandahs to the north and east and triangular roof vents. The Shamrock was rebuilt as a hotel, store and private residence, which may also explain its substantial scale, which now appears out of proportion to the small township.