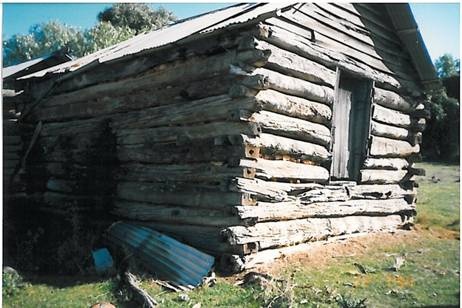 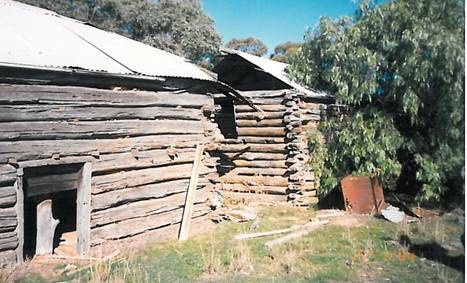 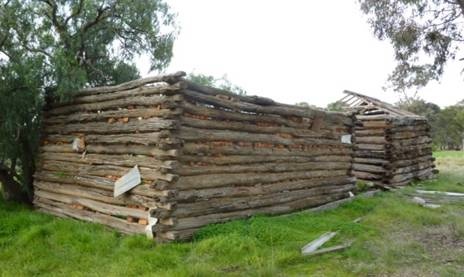 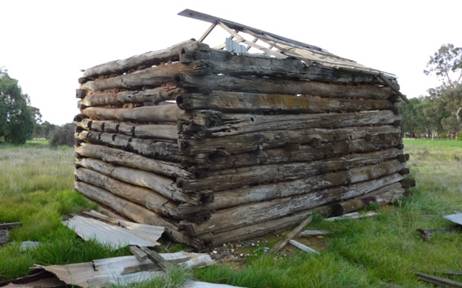 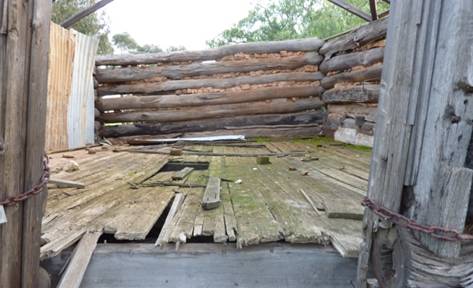 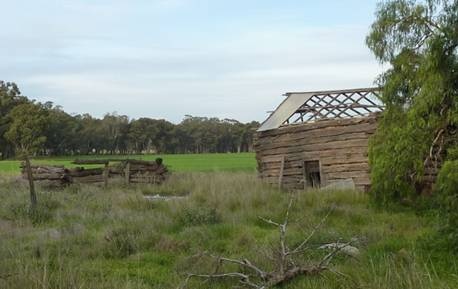 The surviving structures at the Harritable property are two log stores and a log dwelling. All are built of Cypress Pine. The stores are gable roofed log structures, built of un-split logs laid horizontally, with the corners formed by notches cut out of the ends. The eastern store retains part of its sawn timber roof frame and some gable end weatherboards at its eastern end. The gaps between the logs are pugged internally with mud and brick fragments - some pugging survives. The western store has a wide ground level opening to the north and an upper level opening to the east. There is evidence that the store originally had a raised timber floor. The eastern store has a raised timber floor with two doors, one to the lower level (north) and the other to the upper level (east). The smaller structure to the east of the site is believed to have been built as a dwelling. It is approximately square in plan, and in an advanced state of decay.

The log structures (ruins) at Francis Harritable's property south of Sebastian are of local historical and technological significance.

The log structures (ruins) at Francis Harritable's property south of Sebastian are of local historical and technological significance. The log structures are of historical significance (Criterion A), being constructed in the 1860s-70s by Spaniard Francis Harritable, an early settler in Sebastian who invested in the successful Frederick the Great Mine. Harritable acquired extensive land in the region, and also constructed the present Little Sebastian Hotel. The smaller log construction to the east of the site is believed to have been built as a dwelling by Harritable's son, Robert, and possibly dates to the 1890s. The Harritables were associated with the site for at least two generations from the 1860s to the early twentieth century. The association (Criterion H) of the log ruins with Francis Harritable is also of note. Harritable, a Spanish immigrant, was a prominent member of the local community. He oversaw the construction of the Little Sebastian Hotel (S01) and was also a member of the consortium which established the Fredrick the Great mine in 1864. The log structures (ruins), albeit in a depleted state, are comparatively rare (Criterion B) surviving log buildings in the Bendigo goldfields region. Log construction is believed to have been relatively common in the goldfields from the 1850s, although few are known to survive. Technologically (Criterion F), the log structures (ruins) at Francis Harritable's property are significant for demonstrating an approach to the use of a locally available resource (timber) in the construction of vernacular dwellings for storage and human habitation, in this case in the 1860s-70s (stores) and 1890s (dwelling). The surviving internal pugging, with mud and brick fragments, enhances the technological value of the structures.