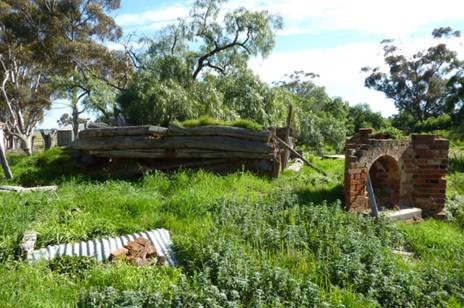 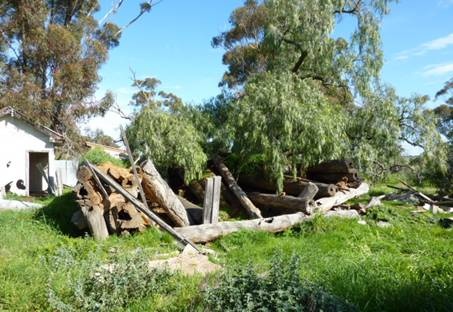 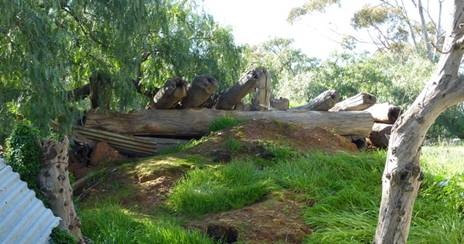 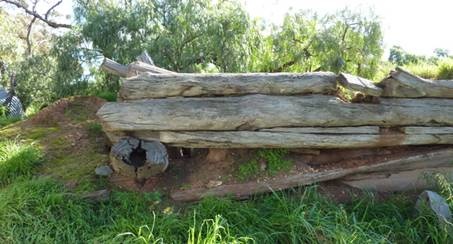 The collapsed log structure at Viewbank is of massive construction, and comprises double thickness logs walls with the cavities filled with earth. There is a rammed earth embankment at the rear (west). The logs have chocked corners fixed with iron pins. The corner posts have U shaped terminations accommodating cross beams. There is evidence of notches cut for a cross beam to carry the roof in the centre of both sides. The remnant roof structure comprises beams oriented east-west. It is possible that the roof was pugged with earth as a sealant. No evidence survives of the original entry.

The log ruin is of local historical and technological significance.

The log ruin at Viewbank (built after 1882), on the Elmore-Raywood Road at Summerfield, is of local historical and technological significance. It is historically significant (Criterion A) for providing evidence of a farmstead at Summerfield, a small farming community east of Raywood, which was settled from the 1860s. The property was occupied by Thomas Hocking and his family from 1882, and the Hocking family retained ownership of the site until the 1990s. The ruin demonstrates an innovative approach to building a food store on an isolated farm, making use of available materials and vernacular construction. Thomas Hocking, although apparently a settler of limited means, was inventive and resourceful in his approach to this building. This is demonstrated through the use of the massive timbers and other construction techniques which remain evident, such as the double thickness log walls with earth-filled cavities, and the use of the rammed earth embankment to the rear. Hocking also built another house of bark and mud at Tandarra. The log ruin at Viewbank is also significant as a rare surviving example (Criterion B), albeit in a depleted state, of a log structure in the Bendigo goldfields region, where log construction was recorded from the early 1850s. The subject ruin is additionally rare for the use of the massive timbers in its construction and as a surviving (and assumed to be) purpose-built food store originally associated with a 1880s selection. Technologically (Criterion F), the Viewbank ruin is significant for demonstrating an approach to the use of locally available materials (timber and earth) in the construction of a domestic farm building in the 1880s and for the use of particularly large timbers in the construction, as well as earth-filled cavities and the utilisation of the rammed earth embankment. These aspects of the design would also have provided insulating benefits.