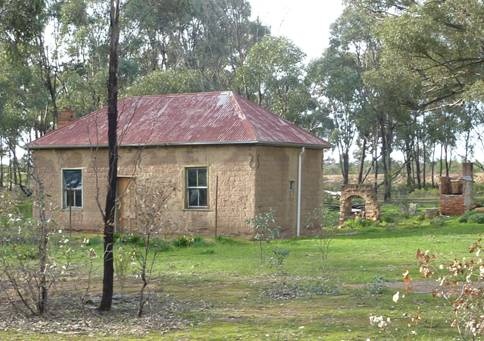 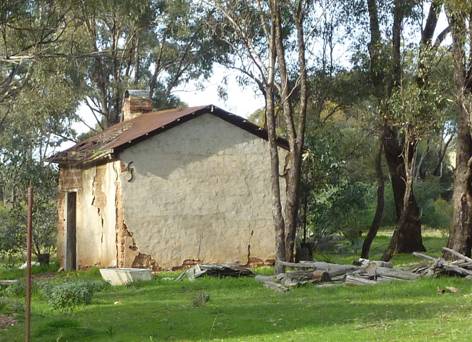 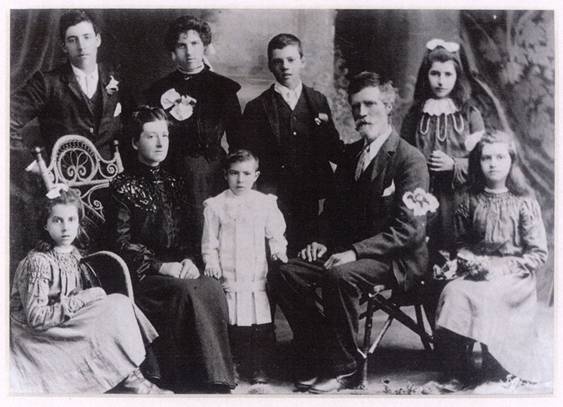 addressing but setback from Caldow Road and a smaller outbuilding at the rear. The Kelly property is

a landholding to the east of Woodvale's historic town centre. The two buildings are located in the

south-west corner of the landholding.

The main house is a symmetrical, single-storey mud brick cottage with a hipped roof. The front

(west) elevation has a central door, off-centre, flanked by timber-framed windows. There is also a small window to the centre of the south elevation. The hipped roof is clad in corrugated steel,

painted. The guttering and downpipes appear to be recent. An external chimney breast, rendered, is

to the north wall. The base, which is presumed to be mud brick, is topped with red brick. A

verandah, partially collapsed in 1998, has been removed. 'S' braces at the corners and through the

There are the remains of a brick hearth/fire place at the rear, presumed to be the former kitchen. The

smaller gable-ended outbuilding, at the rear of the site, is also built of mud brick and is believed to be

a later addition, built largely out of materials salvaged from demolition of the kitchen extension. The

walls are rendered, decaying in some areas to expose the bricks and re-reused bricks appear to have

been pointed with cement mortar, now deteriorating. The outbuilding has a shallow gable roof, clad in

corrugated sheet metal in poor condition. There is a brick chimney. The entrance is positioned

asymmetrically to the north wall. There is a louvre window on the south elevation. The building was

poorly constructed, with undersized structural timber in the roof and lintel above the window, and ungalvanised or poorly galvanised roof sheeting with has corroded badly.

The former Kelly cottage is of local historical, aesthetic/architectural and technological significance.

The mud brick Kelly cottage, believed to have been built by miner[i] Daniel Kelly in c.1892, and, to a lesser extent, the later mud brick outbuilding are historically significant (Criterion A). The former Kelly cottage, at 117 Caldow Road, Woodvale, is of historical significance. Daniel Kelly is believed to have built the first part of this property in 1892. The property provides evidence of local development in the late nineteenth and early twentieth century, where miners and other settlers of limited means continued to build low cost dwellings using vernacular construction methods and locally available materials. Mud brick dwellings of this type were often referred to as 'German' houses in the Bendigo area, where they were common; the description may owe its origins to the German settlers of South Australia who used adobe construction from the 1830s. It is also possible that mud brick building techniques were introduced to the Victorian goldfields via the diggers from California. The mud brick buildings, including the c 1892 main cottage and later, smaller outbuilding to the rear, are also of

including the symmetrical main house, are substantially externally intact, save for the removal of the

additionally some aesthetic value in the informal treed setting, including the adjacent remains of a

brick hearth/fire place at the rear, presumed to be the former kitchen. Technologically (Criterion F),

early twentieth century, providing evidence of the ongoing use of this construction technique decades

after it was first used for buildings in the Bendigo goldfields region.