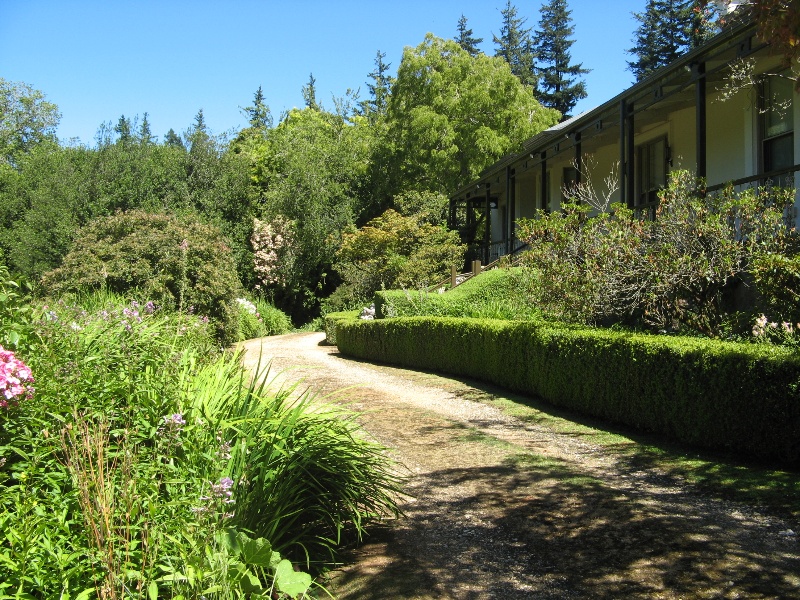 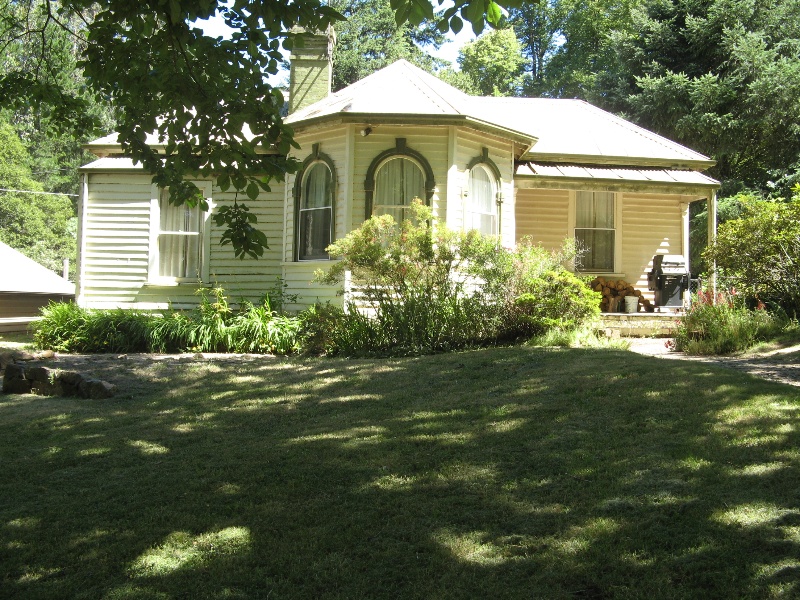 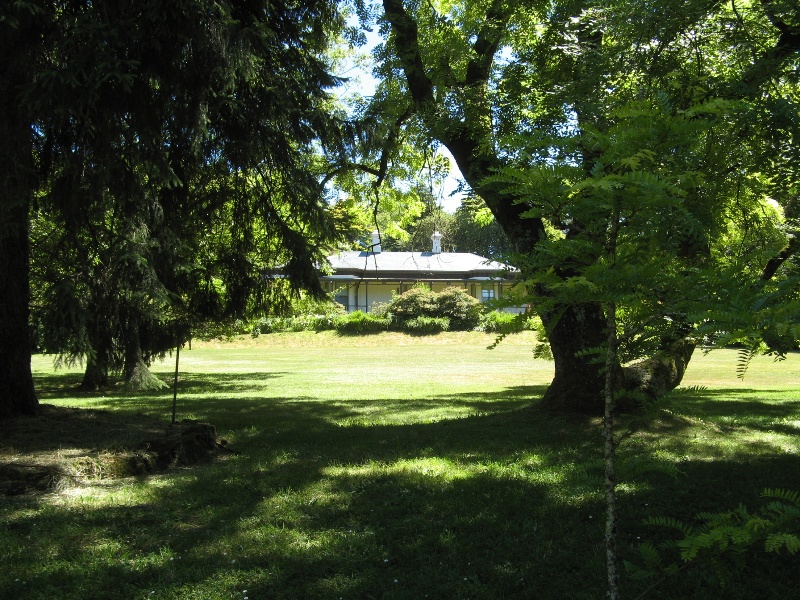 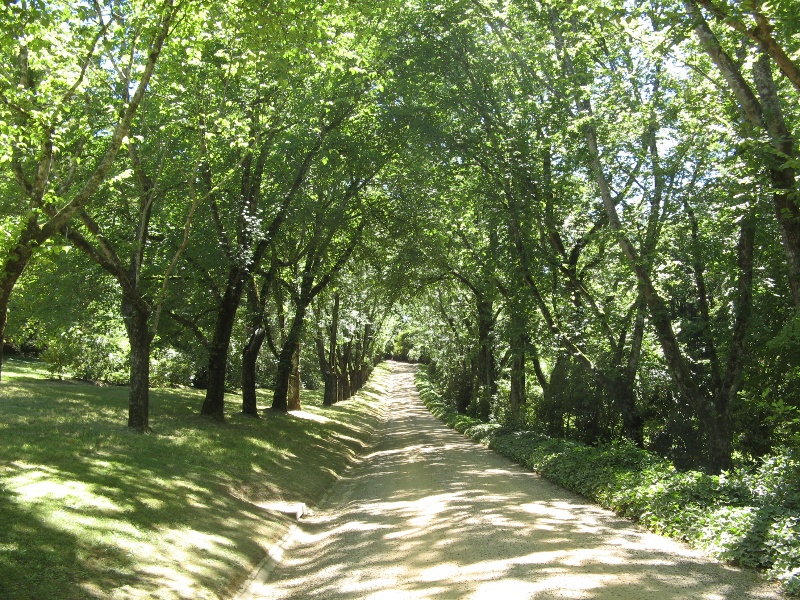 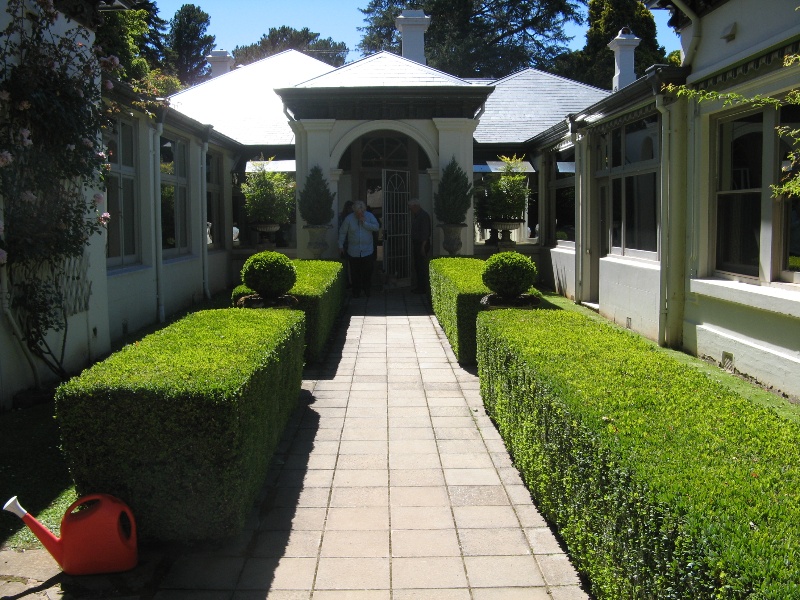 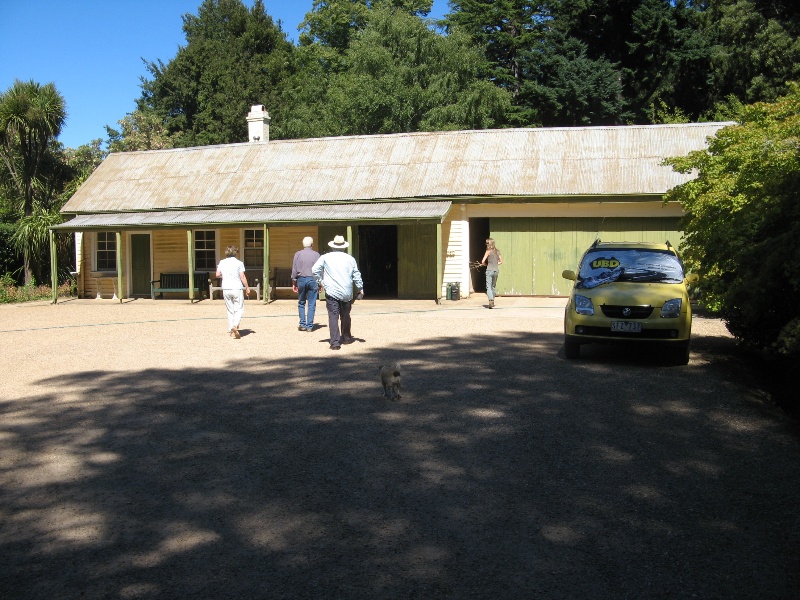 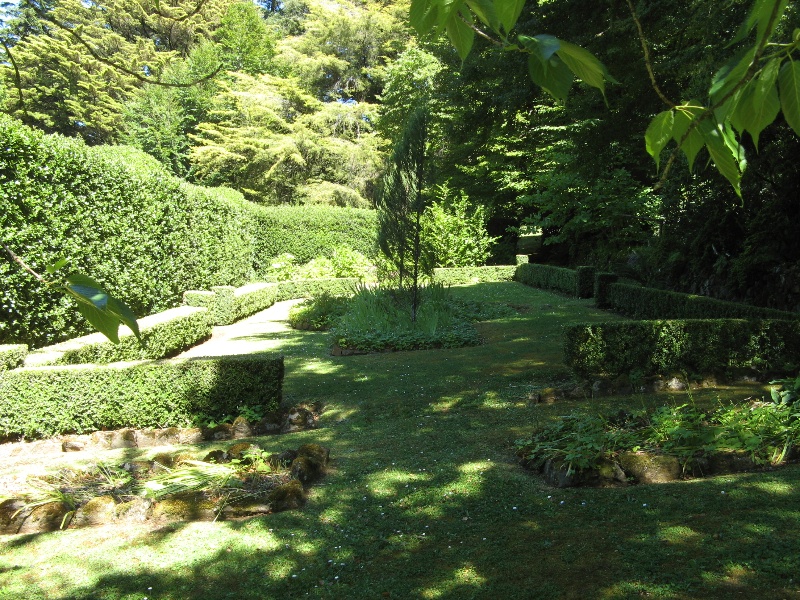 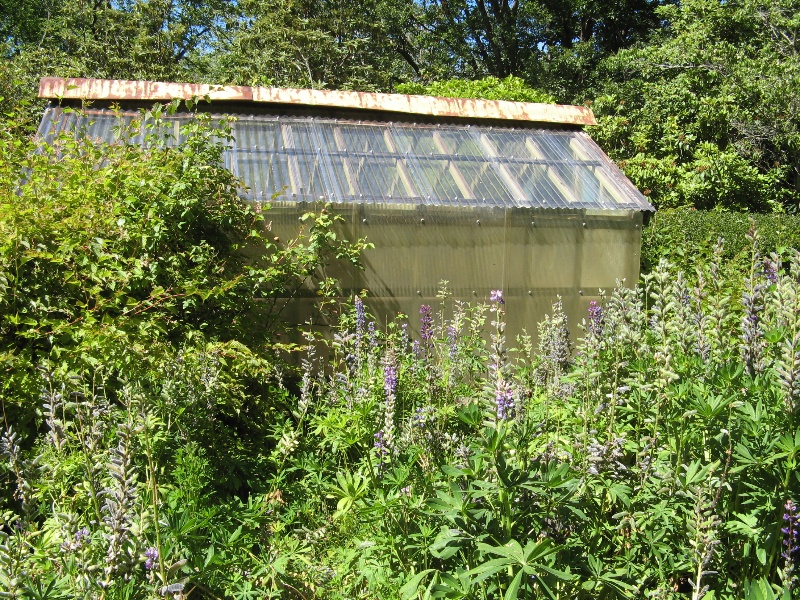 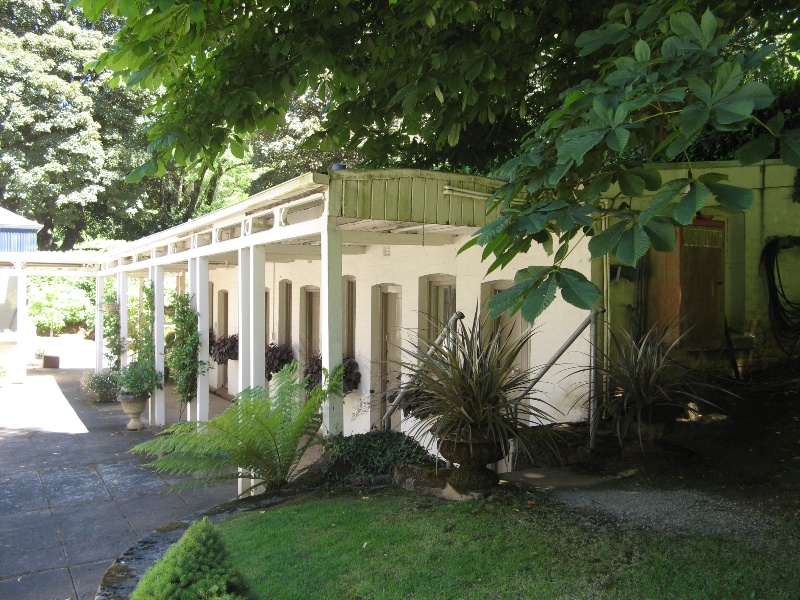 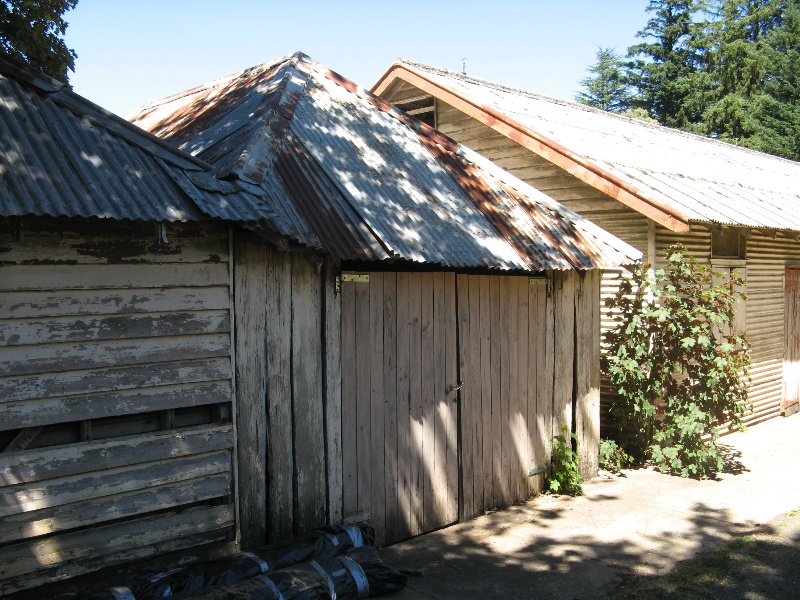 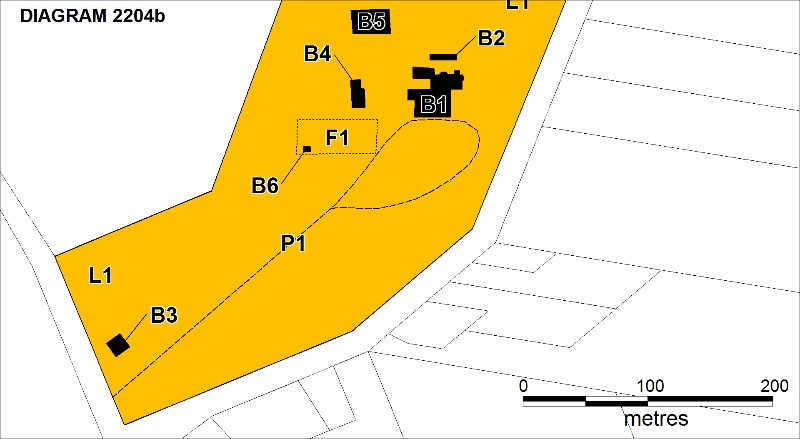 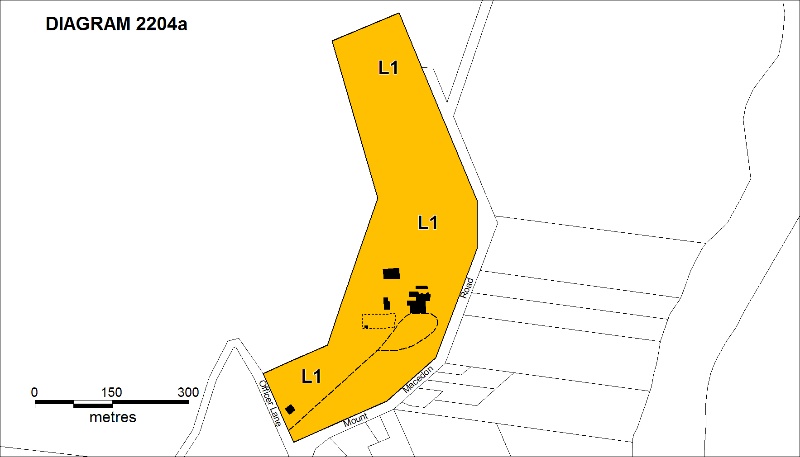 Duneira is bounded by Mount Macedon Road along its eastern boundary, Officer Lane along its southern boundary, and state forest to its west and north. The 38 acre (15.4 hectare) elongated crescent-shaped site lies along a north-south axis, with a long driveway flanked by approximately ninety Dutch Elms (Ulmus X hollandica) leading to the house through the gently sloping site in an area otherwise noted for its steep terrain and garden terracing.

The land for Duneira was purchased in the early 1870s by the pastoralist Suetonius Henry Officer: four allotments in May 1872, and a fifth allotment to the north in 1877. The property boundaries remain unaltered, with the exception of some excision of land by the Country Roads Board in 1958. In the centre of the property are the stables built in 1874, the residence and servants' quarters constructed in 1875-76 and a service block to the rear built c1913, a milking shed complex and garden buildings. There is a c1885-87 gate lodge at the main entrance. A grass tennis court and ornamental gardens, including the Secret Garden, were developed in the early 1900s. The southern area of the site has a park-like landscape with an informal planting scheme, and includes many significant conifers, broad-leaved deciduous trees, rhododendrons and other cool climate plants. The northern half of the property contains orchards of fruit and chestnut trees and paddocks for stock.

Duneira was initially laid out and planted by Officer in 1872, and reached its pinnacle of development under the ownership of James Smith Reid and family from 1890 to 1940, who subsequently enlarged and upgraded the house for use as a year-round residence in 1913. Careful and largely sympathetic management under its four subsequent owners: Betty Alcock (Wickens), Keith Allen, Christine and Laurie Matheson, and from 1992 to 2002 Stuart Stoneman, has resulted in the property retaining the majority of its landscape features intact. While the main house and gate lodge have both been enlarged and upgraded by the successive owners, this has been carried out largely in a respectful manner, externally reproducing the details of the original sections, while interior spaces more faithfully reflect their own era.

Duneira is of historical, architectural, aesthetic, scientific (botanical) and horticultural significance to the State of Victoria

Duneira is of historical significance as an integral component of the surviving Mount Macedon precinct of hill station properties, developed by some of the most prominent and wealthy citizens of Victoria in the late nineteenth and early twentieth centuries, and damaged by catastrophic bushfires in 1983. Its nineteenth century residence and outbuildings set in generous gardens and grounds evoke a past lifestyle in Victoria, characterised by horticultural extravagance and competition. In common with other hill station properties, Duneira was developed to be largely self-sufficient. The property includes stables, milking shed, hay shed, main residence with servants' quarters, and outbuildings housing a boiler, dairy, cool room, and engine house. It also includes orchards and paddocks for stock. Substantial kitchen gardens were once cultivated on the terrace just north of the main residence.

Duneira is of historical significance for its associations with Suetonius Henry Officer and his wife Mary Turnbull Officer, nee Cairns. Suetonius Officer, who first purchased and developed Duneira, numbers among the leaders of science and commerce who pioneered the establishment of hill stations at Mount Macedon. The Officers were followed in their purchase of land there by the husbands of Mary Officer's two sisters (Robert Harper of Huntly Burn and John C Lloyd of Montpelier/Timsbury), creating a strong Cairns family connection in the area.

Duneira is of architectural significance as an unusual example of the use of a formal Italianate villa design on a hill station property, in contrast to the picturesque designs employed for contemporary hill station houses. The main residence is one of the earliest surviving hill station houses on Mount Macedon, and the oldest one to be architect-designed at the outset. It is one of only four hill station residences at Mount Macedon believed to have been built in the 1870s that survived the 1983 bushfires. It has associations with the architect Levi Powell, who designed the original house in 1875 (which was extensively enlarged at the rear during the first half of the twentieth century). The retention of the gate lodge, a fine example of a relatively rare building type is also significant.

Duneira is of aesthetic significance for its relatively flat site in an area noted for its steep terrain which gives a distinct landscape character unusual among hill stations. The open landscape layout incorporates a straight drive and a carriage loop more common for pastoral homesteads. The East and West Lawns are of central importance to the aesthetic significance of the property, being the major landscaping feature through which the Elm Avenue runs. This comprises approximately ninety Dutch Elms (Ulmus X hollandica) underplanted with bluebells (Hyacinthoides non-scripta) and is one of the best surviving examples of a private formal avenue in Victoria. Another strong aesthetic feature of the property are the two northern avenues of sycamores and oaks, and the hedges of mature rhododendrons, holly and Portuguese laurels.