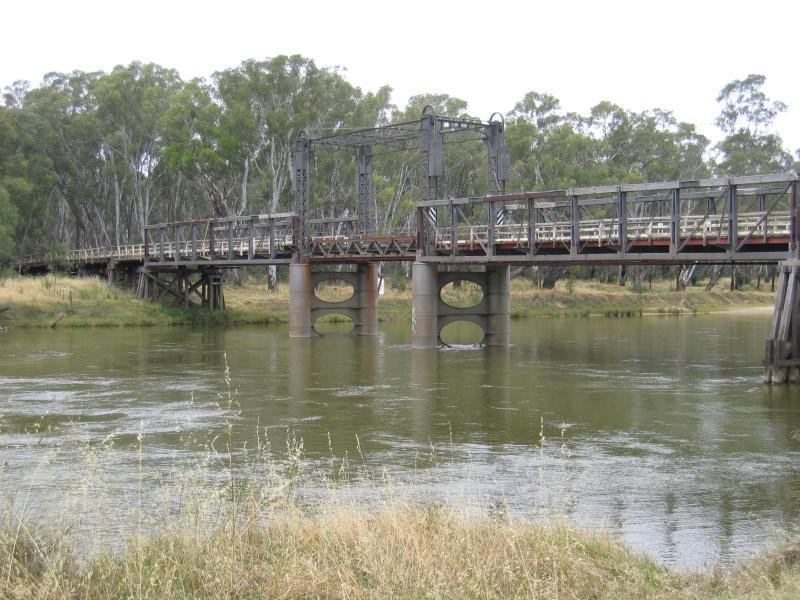 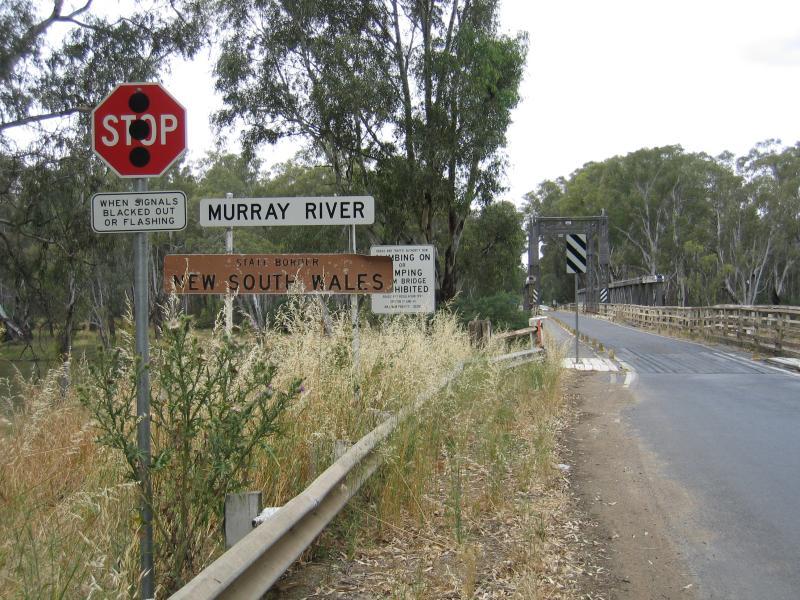 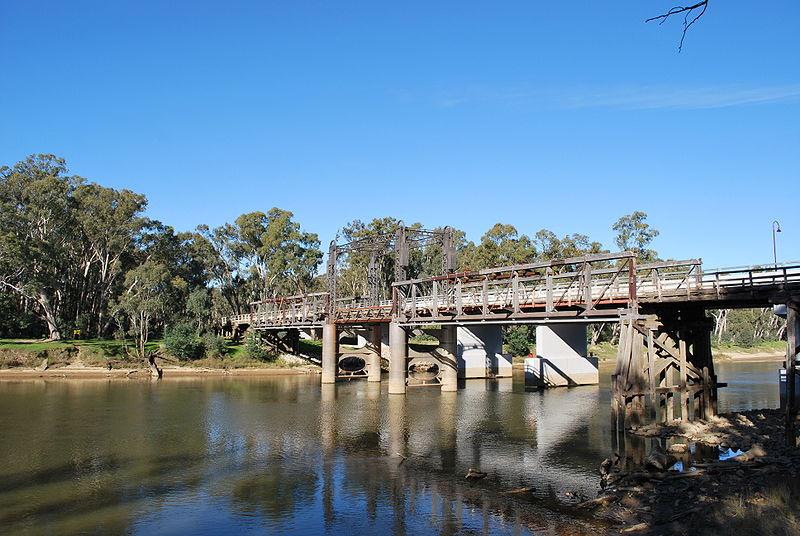 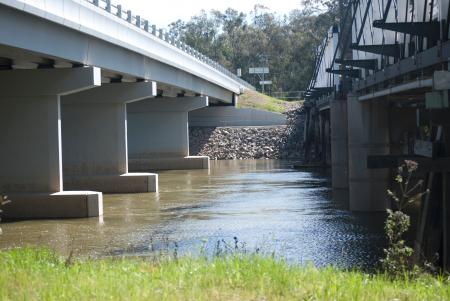 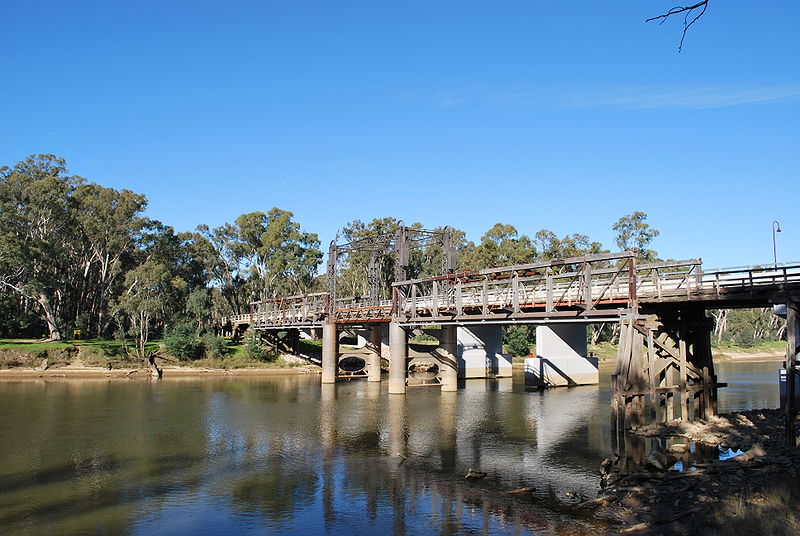 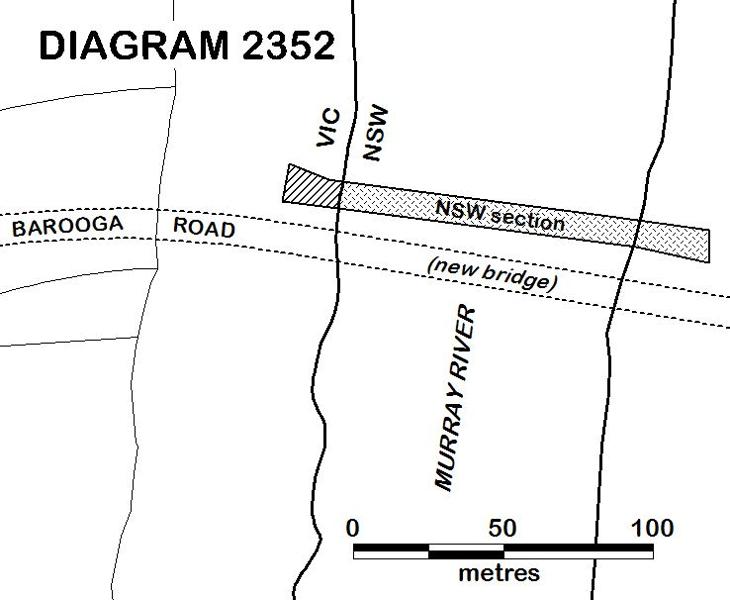 Since the beginnings of European settlement, the waters of the Murray River have been a key factor in the commercial agricultural development of what has been some of the most productive land in modern Australia. During the mid-nineteenth century toll-ferries and row boats had a monopoly on transporting people and goods across the river. From 1889 a punt operated between Cobram and Barooga and was the only means of crossing the river at this point. In 1879 two bridges opened - the Murray Bridge (South Australia) and the Echuca-Moama Bridge. During the 1880s and 90s the colonial governments of New South Wales and Victoria began a joint program of building bridges with opening spans which could accommodate paddle steamers, trains and road traffic. The Old Cobram-Barooga Bridge was officially opened on 3 December 1902 and provided access for heavy goods vehicles to transport agricultural produce. The central lift-span of the bridge allowed paddle steamers to pass underneath. The bridge was constructed by the prolific Victorian bridge-building firm of JB and W Farquharson of Melbourne. The improved capacity to transport agricultural goods, particularly wool and wheat, to Melbourne, Sydney and larger regional towns consolidated the importance of north-eastern Victoria and the Riverina District of New South Wales. The Cobram Bridge is the only bridge on the Murray River whose construction was completely funded by the Victorian government. In 2002 a high level concrete bridge was built to the south of the original 1902 bridge, which remains open for pedestrian traffic.

The Old Cobram-Barooga Bridge is a timber truss, lift-span bridge carrying two traffic lanes across the Murray River between Cobram and Barooga. The primary axis of the bridge is east-west. The bridge has a clearance over normal water level of 7.9m with the lift-span closed and 14.3m with the lift-span open. The bridge was superseded by a parallel concrete bridge and no longer carries vehicular traffic. The three main spans include a single, vertical-lift opening span supported on cast iron piers in the centre of the bridge, flanked by a single de Burgh Truss span on each side. The eastern (NSW) side has been truncated and retains only one timber beam approach span, which terminates in a steel fence and stair to ground level. All three timber beam approach spans survive on the western (Victorian) side. The outer ends of the truss spans and the approach spans are carried on timber trestles on timber piles. The outer ends of the lift-span are carried on twin cylindrical cast iron piers with intermediate perforated steel plate braces.

The lift-span is formed by a roadway between riveted Pratt-Truss box-girders with a span of 18m. The road deck on the lift-span is narrower than the approaches and reduces to one traffic lane. The lifting superstructure comprises four steel lattice towers, connected at their upper level by steel lattice girders. The two de Burgh truss spans, each 31.7m, are of composite timber and steel construction, with paired timber top chords and vertical struts with steel rods forming diagonals within each panel.

The approach spans range from approximately 9.1m to 11m in length and are of timber beam construction, comprising five parallel timber logs spanning between timber and trestle piers. Each span has been strengthened by the addition of four steel rolled steel joists (RSJs), one each located in between the timber logs. There is a footway on the southern side with a timber guardrail but the majority of the timber decking of the footway has been removed. The footway is absent on the lifting span and the footways have an entrance to the road deck on either side of the opening span (pedestrians are/were required to share the road deck with vehicles for the length of the opening span).

The Old Cobram-Barooga Bridge is of historical and scientific significance to the State of Victoria. It satisfies the following criterion for inclusion in the Victorian Heritage Register:

The Old Cobram-Barooga Bridge is historically significant as one of most important Murray River bridges constructed between New South Wales and Victoria. Built Federation era, the bridge was understood from its beginnings as an important physical symbol of the creation of a national Australian society out of disparate colonial social components. The bridge was an impressive capital works project which linked road, river and rail routes and facilitated economic and regional growth in both states. Although most of the bridge is in New South Wales it has a special significance in Victoria's history because it was built entirely from Victorian funds and constructed by the Victorian bridge-building firm of JB and W Farquharson. [Criterion A]

The Old Cobram-Barooga Bridge is a rare de Burgh design timber truss bridge incorporating a metal Pratt lift-span. It features a steel lift-span on an iron and concrete substructure with two large de Burgh composite timber-steel truss spans one on each side of the steel lift-span. The de Burgh-Pratt composite timber-steel trusses were built only for a brief period between 1900 and 1904. This bridge is one of three surviving vertical lift-span bridges of this type in Australia and is one of two that retain all of their lift-span operating mechanisms intact. [Criterion B]

The Old Cobram-Barooga Bridge demonstrates a high degree of technical achievement because it represents the peak of lift-span technology in bridge engineering in Australia. The design was largely developed in New South Wales and the efficacy and durability of the design is evidenced by the survival of this bridge and many of its peers for over a century of use. It illustrates the historic need to embrace composite materials for bridges for practical and economic reasons and the ongoing adoption of innovations in bridge construction by Ernest de Burgh Australia's foremost engineers of the late colonial and post-Federation era whose work was influential in this field nationally and internationally. [Criterion F]

The Old Cobram-Barooga Bridge is also significant for the following reasons, but not at the State level:

The bridge is of significance to the people of northern Victoria and the Riverina region of New South Wales as it improved road, rail and river links between the states which encouraged the agricultural and economic development of these regions.