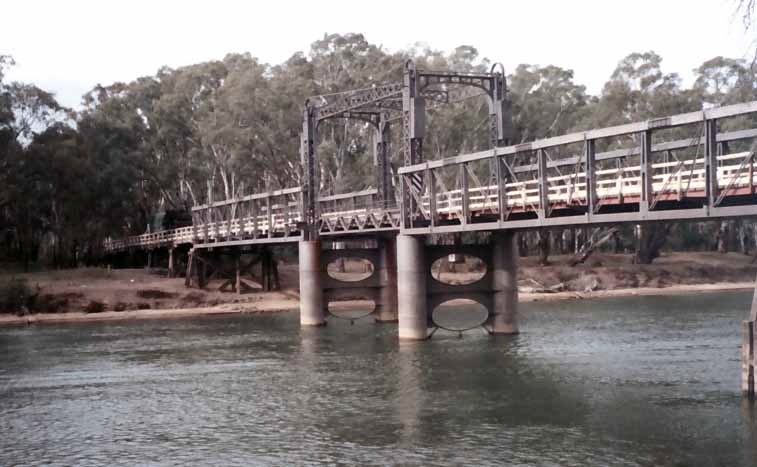 Built in 1902, the Murray River lift-span bridge near Cobram is historically, scientifically, socially and aesthetically significant at State level. It is a large twelve-span bridge of timber, steel, iron and concrete, and features a steel lift-span on an iron and concrete substructure, with two large De Burgh composite timber-steel truss spans (modelled on the American Pratt pattern) one on each side of the steel lift span.
The De Burgh (Pratt) composite timber-steel trusses which are such an important and attractive element in the structure, were built only for a brief period between 1900 and 1904, and were largely displaced by Dare's version of the composite steel-iron-timber Howe Truss on N.S.W. Public Works projects after 1905. The Murray River has another bridge sharing similar features, at Koondrook-Barham, but this pair of bridges are extremely rare in the broader Australian context, and nothing like them exists south of the Murray.
The Cobram bridge's steel lift span represents the peak in evolution of New South Wales lift-span technology associated with leading Sydney bridge engineer, Percy Allan. It is a monument to the engineering ablilities of Allan and E M De Burgh at Sydney, and the construction skills of the prolific Victorian bridge-building firm of Farquharson which constructed many famous large river bridges: Chinaman's Bridge and the old Seymour highway bridge on the Goulburn River, and a series of Murray River bridges including superb existing lift-span and/or truss bridges at Swan Hill, Tocumwal, Cobram and Howlong, and other timber-truss bridges long gone like the old Albury Bridge and the Tintaldra Bridge.
For many decades the big river bridge has played a very importnat social role in linking the Riverina centre of Berrigan, and isolated residents of the smaller New South Wales riverland settlement and district of Barooga, directly with Cobram and Shepparton in north-central Victoria. Built in the era of Australian federation, the bridge was seen from its beginnings as an important physical symbol of the creation of a national Australian society out of disparate colonial social components. Its special social importance to settlers on the Victorian side on the Murray River is suggested by the rare situation that this bridge, which is officially New South Wales property, was built entirely from Victorian funds.
Aesthetically the Cobram lift-span bridge and its forest context have changed little from what they were early this century. Strengthening of some of its timber-beam-span substructure by the addition of some steel components is not readily visible to the passer-by. Its unusual combination of a tall steel lift span along with heavy timber components of the lengthy De Burgh composite-truss spans on either side, plus lengthy timber-beam approach spans at either end, is visually striking. The bridge links Cobram and Barooga, but is situated on a broad stretch of Murray River floodplain, within a picturesque rural context of spreading red-gum trees belonging to the Barooga State Forest.
Classified: 19/05/1998