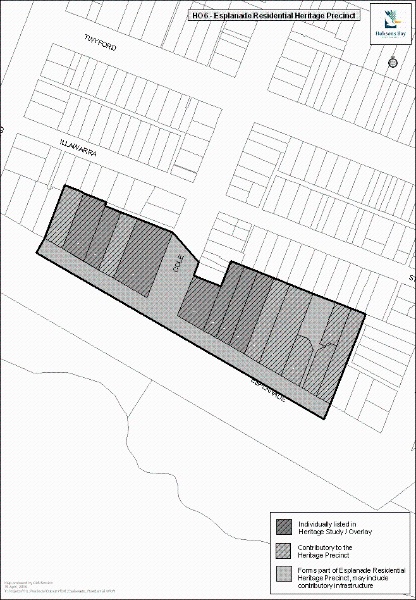 The Esplanade residential Heritage Precinct, which comprises all land in HO6 and generally includes properties with a frontage to the Esplanade between Thompson Street and Giffard Street, Williamstown.

The Esplanade Residential Heritage Precinct is of local historic, social and aesthetic significance to the City of Hobsons Bay.

Historically, the Esplanade is significant for its illustration of the strong relationship between the early residential development early residential development of Williamstown and the maritime industries that defined the character of the city at that time. It is notable for its very early dwellings from the mid-to-late nineteenth century, many of which were occupied by locally important residents who were associated with the maritime pursuits that distinguish Williamstown within the metropolitan area. (AHC criteria A4 and D2)

Aesthetically, the Esplanade is significant as a cohesive nineteenth century residential streetscape comprised of predominantly Victorian era houses with common or similar characteristics of design, siting and scale. Many are externally intact and others, although altered, still retain their distinctive form and siting and hence contribute to the precinct. Distinctive elements include:

- The presence of a number of larger villas in the Italianate style, which is uncommon in Williamstown.

- The visual connection between the houses and the waters of Port Phillip and Hobsons Bay.

- The influence of the relatively severe maritime environment on building details such as high corrugated iron fences to keep out salt and drifting sand and the relative absence of mature ornamental trees in private gardens and the complete absence of street trees.

Please note that some heritage places within this precinct may also have an individual citation in this Study and there is a separate citation for the Esplanade Foreshore precinct. Please refer also to the citations for individual properties in the Esplanade west of Giffard Street and the Hannan's Farm Heritage Precincts.