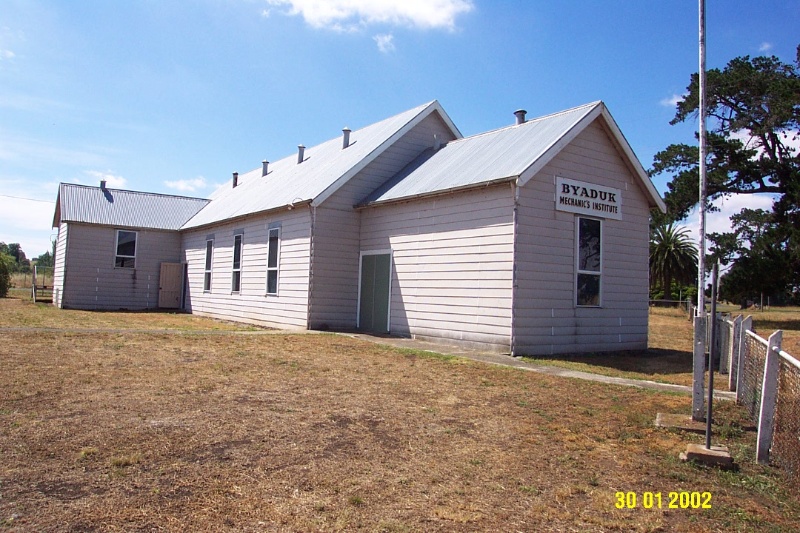 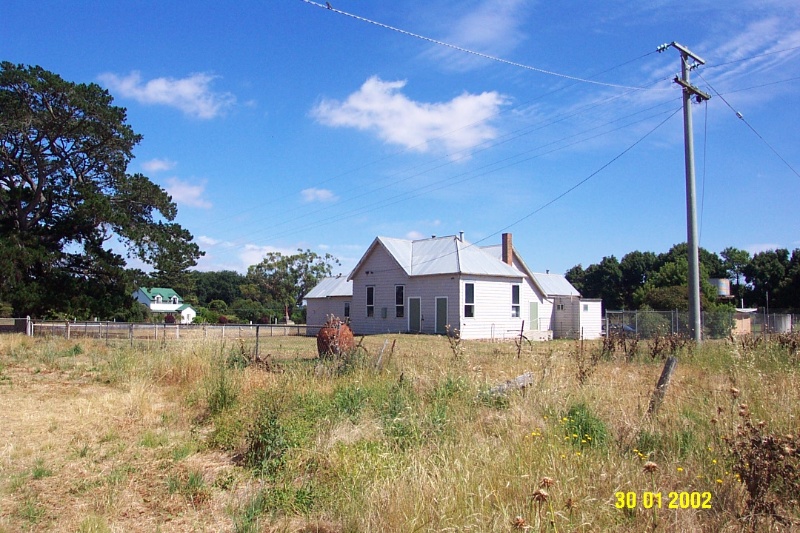 What is significant?
The Byaduk Mechanics Institute and Free Library is located on the Hamilton-Port Fairy Road Byaduk, some 100 metres south of the intersection with the Byaduk-Penshurst Road. The Mechanics Institute is a large structure of several rooms, which have been added to the main hall at various stages in the 20th century. he main hall of the Mechanics Institute is a substantial structure of approximately 25 X 10 metres, with a plaster ceiling and timber floor. The walls are lined with tongue-in-groove pine boards, with a dado . The stage is located at the east end of the hall, and the proscenium is clad in pressed metal, with an ornate plaster border in a continuous chain pattern. At the other end of the auditorium, a door leads through to the vestibule and Reading Room. Above the door is a timber structure, now boarded up, which housed the projection equipment for the screening of films in previous years. An early photograph of the Institute reveals that this projection room was approached by an external wooden staircase, since removed. A ticket booth is located at one side of the vestibule.

To the left of the main auditorium, accessed through a door to the side of the stage is the Ladies Room and bathroom. To the right of the auditorium is the Supper Room and kitchen. The walls of the Supper Room are hung with a large number of photographs relating to the early history of Byaduk, and a display case on the far wall holds the records of various societies which met in the Institute. Likewise, the walls of the main hall feature many photographs of early settlers, together with a World War 2 Honour Roll, and a mounted commemorative tablet, salvaged from the ruins of the Presbyterian Church. The tablet, badly cracked, is dedicated to Private Frank Suttie, killed in the Boer War. The Mechanic's Institute and Free Library are in excellent condition, but retain a very low degree of integrity.

How is it significant?
The former Mechanics Institute Hall and Free Library are of historical, cultural and social significance to the township of Byaduk.

Why is it significant?
The former Mechanics Institute and Free Library are of historical significance to Byaduk because, in the 19th and early 20th centuries the institution reflected the town's status and aspirations as well as the cooperation of civic leaders. It is of cultural significance not only for its association with the self-improvement of its citizens through reading, lectures and concerts but also for the shared values it represents which are the basis for a sense of community. The hall is of social significance because it provides a focus for community activities such as dances and film nights. These roles continue and the hall is now used for infant welfare and other community support groups.
Show more
Show less
All information on this page is maintained by Southern Grampians Shire. Click below for their website and contact details.