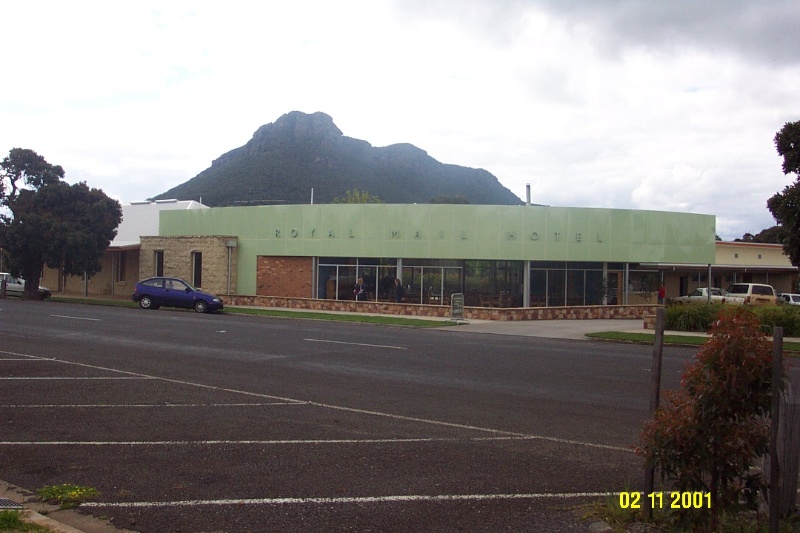 What is significant?
The Royal Mail Hotel, located on the western edge of Dunkeld on the Hamilton Highway, dates from 1855. Although now the oldest surviving hotel building in Dunkeld, the Woolpack Inn was the first established. The stone core of the present Royal Mail Hotel was built for Norman Ross. In 1859 it was described as having ten rooms and a ten-stall stable. In 1860 Henry Cook purchased the hotel and he owned it for at least ten years. In that time James Hucks and Edwin Collins were the publicans. The latter had been its resident butcher from 1860 and left the Royal Mail to establish the new Railway Hotel in 1877. The Royal Mail Hotel survived the 1943 bush fire, which destroyed much of Dunkeld, but much of its fabric was demolished subsequently. Only two sections of the front wall and the kitchen/dining room survive. The hotel was substantially altered and extended in 2000 to the design of Barrack Douglas & Co, architects and planners and was a finalist in the RAIA awards in 2001.

How is it significant?
The Royal Mail Hotel is of historical and architectural significance to the township of Dunkeld and the Southern Grampians Shire.

Why is it significant?
The Royal Mail Hotel is of historical significance as one of the many hotels and the oldest surviving in Dunkeld. They served as important meeting places for the community in the early stage of the town's development, a role which continues, especially after its refurbishment in 2000. The Royal Mail Hotel is of architectural significance for the quality of that work, which was recognised in the RAIA awards of 2001.
Show more
Show less
All information on this page is maintained by Southern Grampians Shire. Click below for their website and contact details.