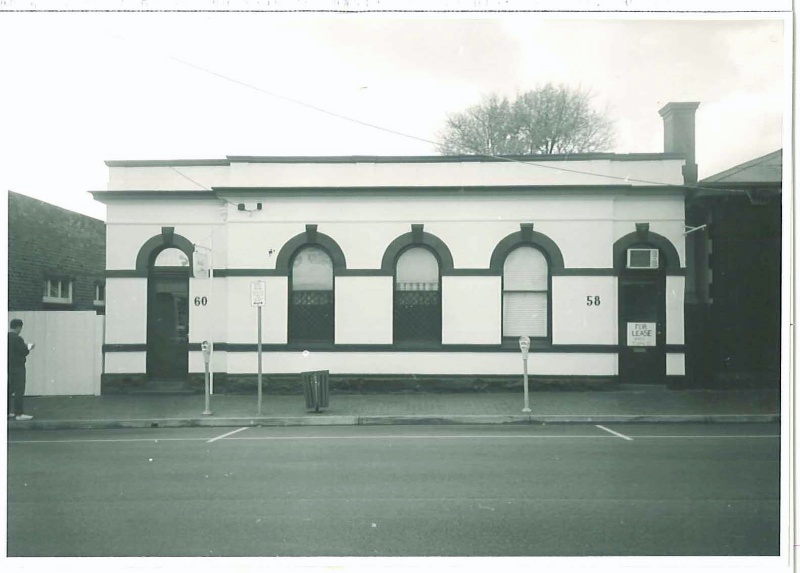 SIGNIFICANCE: One of the very early banks in Hamilton and important as an element in the streetscape with its neighbours

STATEMENT OF SIGNIFICANCE
Former Bank
58-60 Thompson Street
This building has local significance for its architecture and historical associations. It was built on land originally sold by the crown at auction in 1852 to a J Hutchison. (i) This was probably John Hutcheson (c1819-70) who, with his brother George, was an early miller in Hamilton. (ii) Hutcheson also bought the block next door and may have lived in the townhouse which survives there. The bank was built in the early 1860s or even the 1850s and it appears to have been occupied by the Bank of Victoria or the Colonial Bank. (iii) It represents the first stage of banking in the town and is more humble than those which date from the next decades. The building has the standard plan and form of early banks with two entrances, one for the chamber at the front and one for the residence at the rear. It was most important that the bank manager lived on the premises. The Conservative Classical style was used to create a sense of reliability and respectability in the bank's depositors. The facade which has the simplest of classical detailing is slightly assymmetrical.

The building has long been used as offices both for the Lands Department and for various professionals. Now one section is occupied by the Medici Hair Salon and the other is vacant. The building remains significantly intact and is in good condition. Like several of its neighbours it represents the expansion of the Gray Street commercial area into surrounding streets. It is an important element within the streetscape, especially with its neighbour at 56 Thompson Street and in contrast to Roxburgh House, 64 Thompson Street.

FOOTNOTES
i Township of Hamilton Parish Plan. No other spelling mistakes have been found in the Parish Plan but the authors are confident that this is John Hutcheson. Alternatively the difference in spelling may be Garden's.
ii Garden, D, Hamilton, p 48-49.
iii It has not been possible to corroborate this with the Rate Books but this building seems to have preceeded the bank built at 131 Gray Street in 1867.