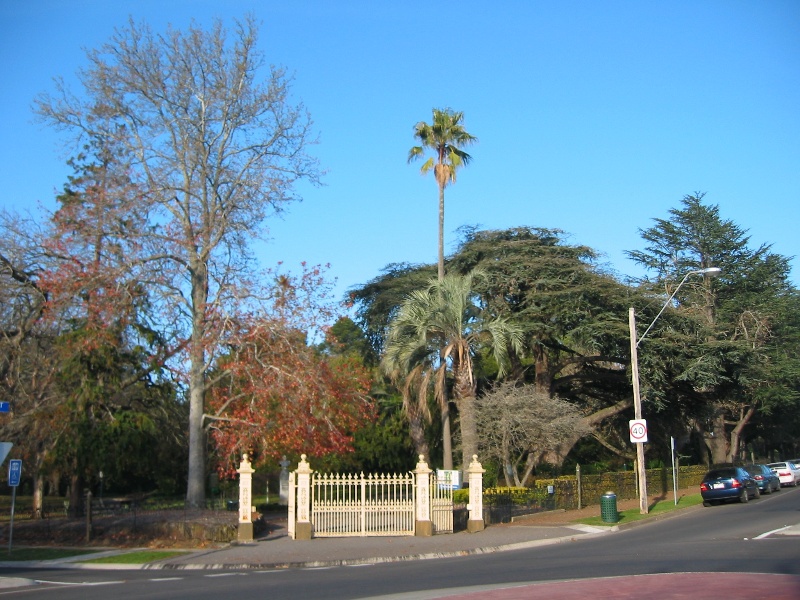 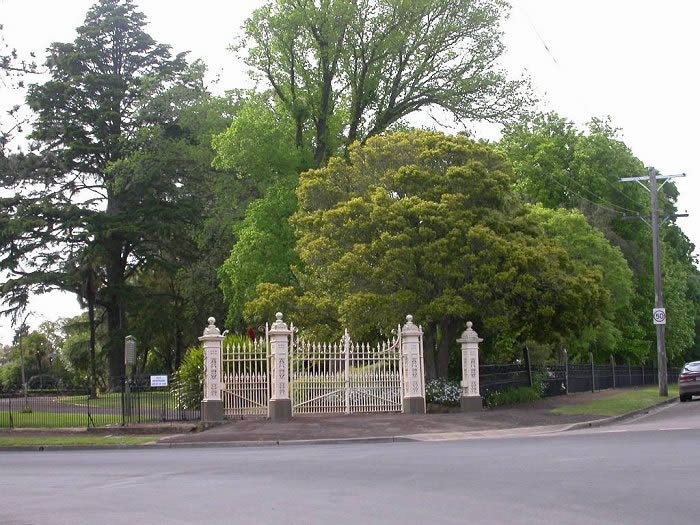 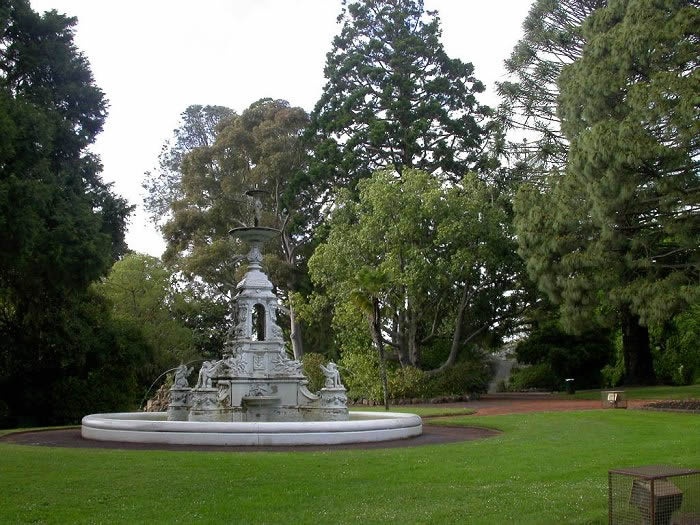 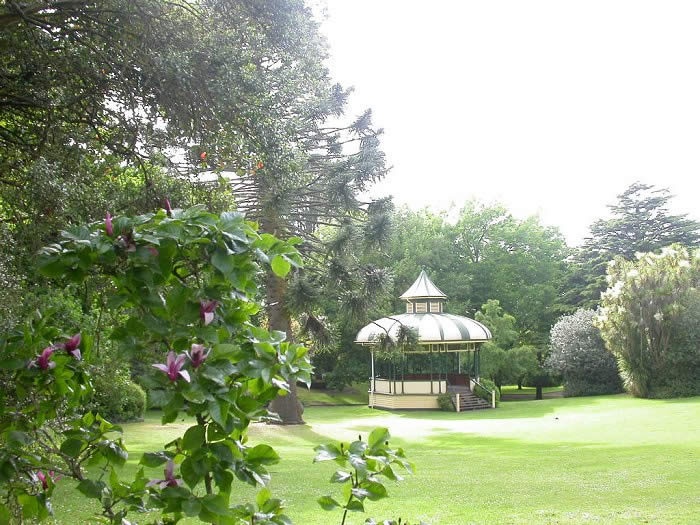 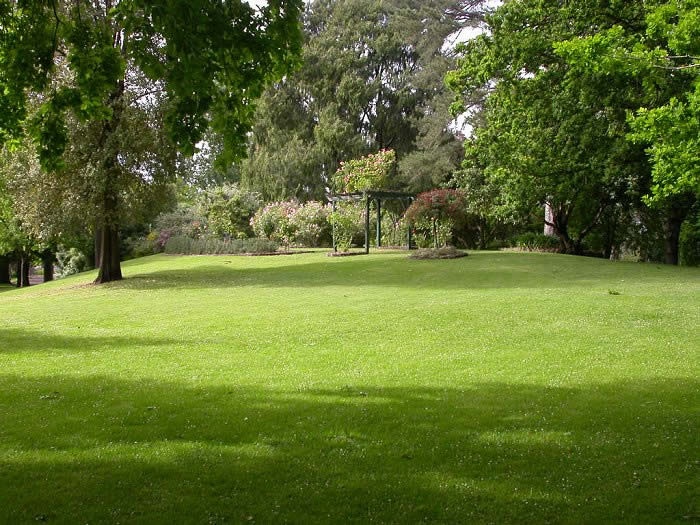 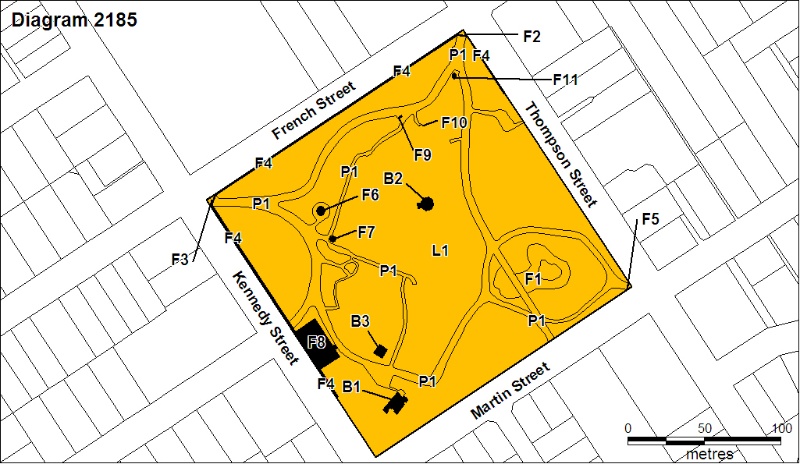 The Hamilton Botanic Gardens are one of the earliest regional botanic gardens in Victoria. Hamilton was first surveyed in 1850 with land set aside for a public garden in 1853, and was gazetted in 1870. The undulating site maintains the original reservation of 10 acres (4 hectares) and is located one block south of the commercial centre of Hamilton. The first plantings were undertaken by William Ferguson in 1870, and from 1881 developed in accordance with a plan by William Guilfoyle, which survives along with the accompanying letter. The ground gently slopes from the north and west to the lowest point in the east where a lake was constructed by late 1883. Lake restoration work in 1995 included the construction of the fourth bridge on this site with the first known reference to a bridge being in 1908. The site is enclosed by a decorative timber post and iron fence with elaborate gates funded by the community being erected by 1893 at the northern corner main entrance at the intersection of Thompson and French Streets, and later in 1907-09 at Kennedy Street. The Gardens have an encircling path with shrubberies and trees planted around the perimeter. A network of curved asphalt and gravel paths divide the centre of the garden, defining large sweeping lawns dotted with mature specimen trees and irregular shrubberies. These include a mature collection of oaks, conifers and elms as well as a number of rare specimens. Important buildings and structures are the cottage, erected in 1877 and relocated in 1908 as both a residence for the curator and an ornamental attraction, the cannon from HMVS Nelson first placed in the garden in 1893 displaying the fashion for ordnance as war trophies in public gardens, the Thomson Memorial Fountain constructed c.1921, a bandstand, initially constructed in 1904 and relocated from nearby Melville Oval in 1998, the Australian Natives' Association (ANA) Fountain built in 1908, the Kennedy Street (western) Gates opened in 1909, and the Glass house donated by the County Women's Association (CWA) in 1934, and a King George V memorial bust 1937, the Peacock (eastern) Gates erected in 1965, a rare iron lattice arch and some traditional garden seats. Zoological elements have been a feature of the Gardens since 1885 and illustrate the nineteenth century fashion for menageries and acclimatisation with the first flight aviary dating back to 1904. The Gardens retain a large flight aviary, a smaller aviary and an animal enclosure.

The Hamilton Botanic Gardens are of historical, scientific (botanical) and aesthetic significance to the State of Victoria.

The Hamilton Botanic Gardens, established in 1853, are historically significant as one of the earliest provincial botanic gardens, being the fourth oldest in Victoria. Botanic Gardens had been established in Melbourne in 1846, and Portland and Geelong in 1851. The Hamilton Botanic Gardens have a special association with the work of William Guilfoyle as an early example of his design exemplifying his ideas about planting, which were being actively implemented in his sweeping redevelopment of Mueller's design of the Melbourne Botanic Gardens from 1873 to 1909 and at Warrnambool from 1877. Guilfoyle is regarded as one of Australia's greatest garden designers. The rare 1881 plan and accompanying letter are held in the collection of the Hamilton Art Gallery. The Hamilton Botanic Gardens are of scientific (botanical) significance for the collection of plants characteristic of nineteenth and early twentieth century Victorian gardens and representative of more specialised plant groups befitting the scientific role of botanic gardens. These include the State's only known Gymnocladus dioicus, (Kentucky Coffee Tree), two rare Quercus leucotrichophora (Himalayan Oaks), and the largest known Chamaecyparis funebris (Funeral Cypress). Other significant trees include a very large Quercus robur (English Oak), two rare Quercus agrifolia (Californian Live Oak), an outstanding Pinus nigra var. corsicana (Corsican Pine), Pinus torreyana (Soledad Pine) and Pinus sabiniana (Digger Pine). The scientific importance of the Gardens continues to be developed with the National Collection of Abutilon for the Ornamental Plant Collections Association of Australia being held there since 1986. It is also one of only two botanic gardens, the other being White Hills Botanic Gardens, which still retains zoological elements demonstrating the nineteenth century tradition of animal and plant acclimatisation. The Hamilton Botanic Gardens are of aesthetic significance as one of the most intact examples in Victoria of a nineteenth century regional botanic garden, characterised by curved paths, sweeping lawns, perimeter plantings of conifers, specimen trees, shrubberies, areas of intensive horticultural interest and a lake. It retains its important garden structures and buildings, most notably the Thomson Memorial Fountain, ANA Fountain, decorative fence and entrance gates, cannon, George V memorial bust, iron lattice arch, seats, cottage and a relocated bandstand. The Gardens and surrounding streetscape combine to produce a significant late nineteenth century and early twentieth century precinct which includes important contributory views from, and vistas within, the Gardens. The 'spires' of conifers in the Gardens and the spires of local churches pierce the skyline and make a significant contribution to the Hamilton landscape.
Show more
Show less
All information on this page is maintained by Heritage Victoria. Click below for their website and contact details.