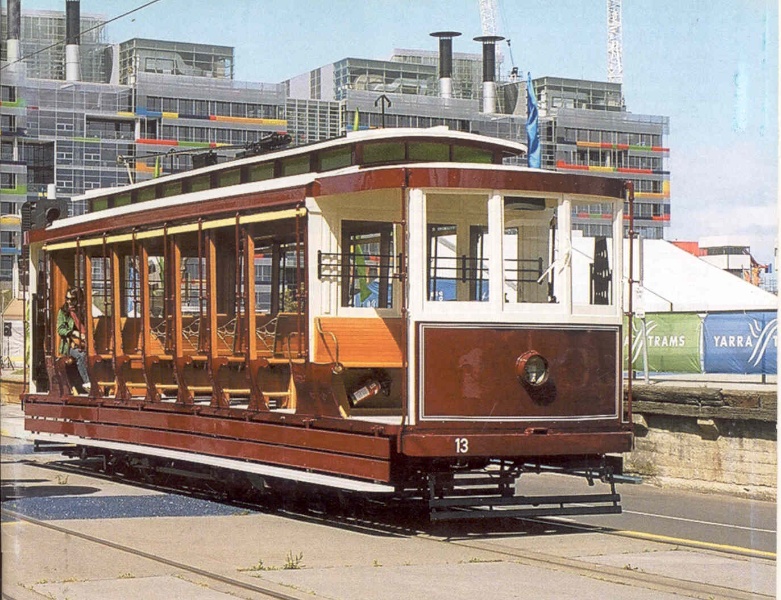 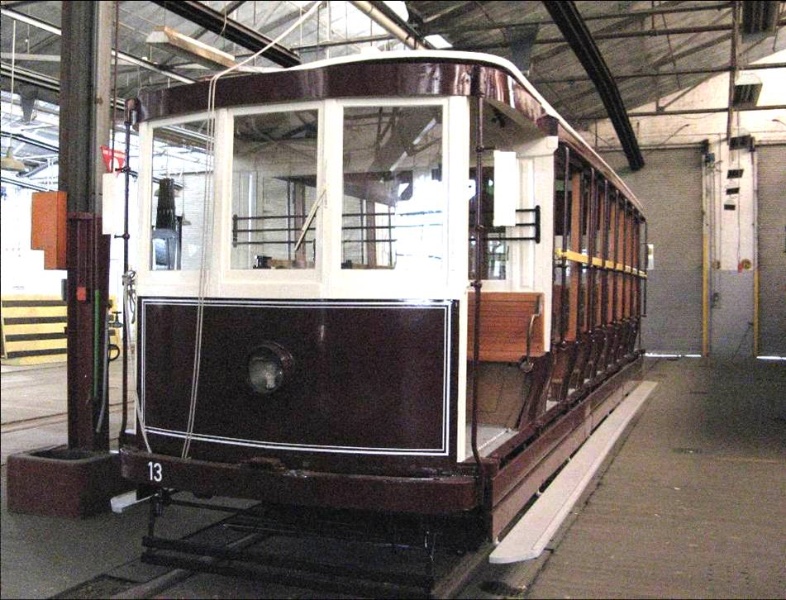 Electric Tram No. 13 is a four wheel, cross bench car constructed by the J. G. Brill Company in Philadelphia, USA and assembled in Melbourne in 1906 by Duncan & Fraser, an Adelaide based carriage building firm. It was one of the fleet of trams operated by The North Melbourne Electric Tramways and Lighting Company, a London company formed in 1905, which operated its lines through the City of Essendon and the Borough of Flemington and Kensington. The tramway part of the undertaking was taken over by the fledgling Melbourne and Metropolitan Tramways Board (MMTB) in 1922. Cross bench cars, also known as "toastracks" were efficient at quickly loading and transporting a large group of passengers, but because of their openness they proved unpopular in Melbourne's climate.

Electric Tram No. 13 entered service on 11 October 1906. When the MMTB took over the operation of the tramways, No. 13 was renumbered No. 214 (V-class). It has undergone a number of conversions and modifications throughout its almost continuous working life. It carried passengers until 1925 when it was used as a "locomotive" to tow ballast trailers during the construction of new electric lines. In 1927 it was converted to a freight car (No. 2A, later No. 17) for transporting stores and equipment between Preston Tram Workshops and various MMTB depots. In 1959 the body was enclosed with a box-like structure to display advertising and the "advertising car" continued its freight carrying role until it was retired in 1977. In 1978 the tram was rebuilt to again carry passengers, the first Melbourne tram to be restored to an earlier appearance and operated as an historic tourist vehicle. Although restored to its nearly original form, later mechanical modifications and improvements such as windscreens were retained. It ceased to run regularly as a tourist tram in 1998 and has been retained by VicTrack as part of Melbourne's heritage fleet and used for special occasions.

Electric Tram No. 13 is of historical, technical, aesthetic and social significance to the State of Victoria.

Electric Tram No. 13 is of historical significance as the only surviving example of an open-sided, cross-bench electric tram from the early period of electric tram operation in Melbourne. Along with its contemporary, Saloon Car No 4, it is the oldest surviving Melbourne electric tram. The tram is associated with the early stage of Melbourne's electric tramways when electric lines were built beyond the scope of the cable tram system which dominated the central city.

Electric Tram No. 13 is of technical significance as a rare example of the first type of cross-bench electric tram to be operated in Melbourne, and while an imported design, it shows the origins of many of the standard elements which became part of the design of later trams built by municipal tramways and later the MMTB.

Electric Tram No. 13 is of aesthetic significance as an attractive and distinctive tram design which demonstrates the original qualities of the 1906 design and the skills of the traditional car builders, and also the skills of the tradesmen involved in the restoration at Preston Workshops in 1978-79.

Electric Tram No. 13 is of social significance as a part of Melbourne's tram culture which is highly valued by the community and contributes to the social life of the city. It is a significant vehicle used during various celebrations and is an important tourist drawcard. It is also an object which is highly regarded by tramway historians in Melbourne and around the world.