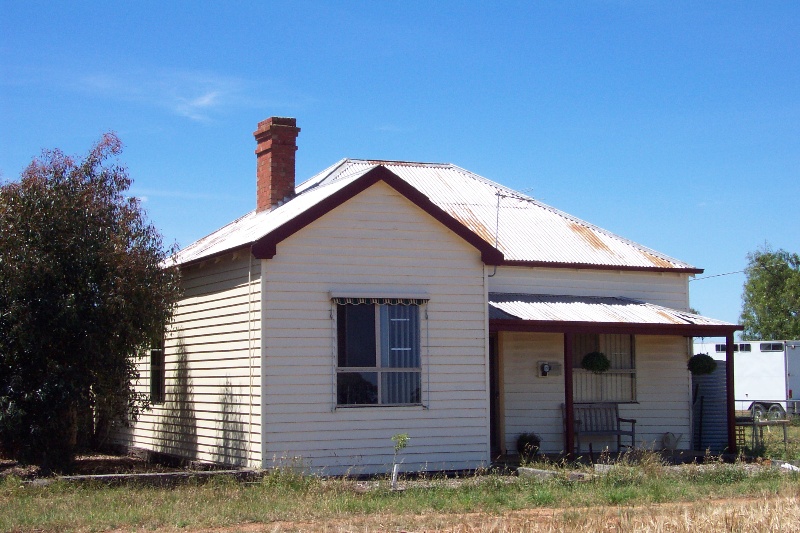 The house at 865 Exford Road, Melton South, has significance as a moderately intact example of a late Edwardian style. Built c.1907 and moved to its present site by 1916. It is also significant for its representation of the Exford Closer Settlement Estate, and the historic break-up of the Melton pastoral estates in the early twentieth century.

The house at 865 Exford Road, Melton South, is of architectural interest. Although relocated and altered, the house still demonstrates a rudimentary Edwardian style. These qualities include the steeply pitched hipped roof form, together with the minor gable and the hipped verandah that project towards the road. Other intact or appropriate qualities include the asymmetrical composition, single storey height, horizontal timber weatherboard wall cladding, unpainted and lapped galvanised corrugated steel roof cladding, face brick chimney with a corbelled top, broad eaves with exposed timber rafters, timber bargeboards on the gable end and the timber framed front door opening.

The house at 865 Exford Road is historically significant at a LOCAL level (AHC A4, B2). It comprises good representive evidence of the break-up of the large pastoral estates at the turn of the twentieth century, which was a turning point in the history of Melton Shire. In particular it is one of the most prominent and best remaining examples of the dwellings associated with the original Exford Closer Settlement Estate. The Exford Estate was a major early estate of the Victorian Closer Settlement Board and, together with the Colbinabbin Estate, also the first to dedicate part of the estate especially for British immigrants. The relocation of the house from a neighbouring Exford Closer Settlement Estate allotment occurred very soon after it was originally built, and contributes to an understanding of the operation of the Closer Settlement Act, and the failures that were a part of the schemes.

Overall, the house at 865 Exford Road is of LOCAL significance.