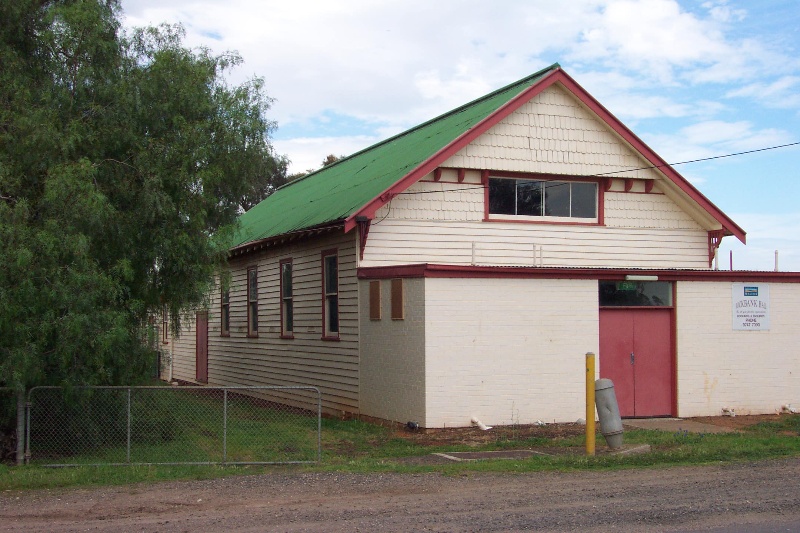 The Rockbank Mechanics' Institute / Community Hall, Leakes Road, Rockbank, has significance as an important social centre for the local community, and as a mostly intact example of an interwar hall building.

The Rockbank Mechanics' Institute / Community Hall is architecturally significant at a LOCAL level (AHC D.2). Although the front flat roofed, brick toilet wing has been introduced and does not enhance the significance of the place, the hall still demonstrates original design qualities for an interwar building. These qualities include the long gable roof form clad in green painted and lapped galvanised corrugated steel and the broad eaves. Other intact or appropriate qualities include the horizontal timber weatherboard wall cladding, regular bays of timber framed double hung windows at the sides, and the decorative gable infill (timber brackets and timber shingling).

The Rockbank Mechanics' Institute / Community Hall is historically significant at a LOCAL level (AHC A4, B2). It expresses the movement for education and self improvement, and an informed participatory democracy which swept across Victoria in the latter nineteenth century and into the early decades of the twentieth century, as well as a need for facilities for entertainment and community life in rural towns. It also represents community life in an era before electronic communication and the motor car became widespread, and when municipalities responsibilities were limited to provision of physical infrastructure services.

The Mechanics' Institute / Hall has played an important role in the story of Rockbank social life, and in the development of its learning, culture, entertainment, celebration, commemoration, and community groups.

The building, with its distinctive inter-war architecture, also expresses a major era of growth in the Rockbank district and township following the break-up of the massive Clarke estate. It is one of only three remaining buildings (with the post office, and a private dwelling) of eight that represented the core of the town in the late 1930s. Its context of sugar gums and peppercorn tree plantings also contributes to this historic context.

The Rockbank Mechanics' Institute / Community Hall is socially significant at a LOCAL level (AHC G.1). It is recognised and valued by the local community of cultural and recreational reasons.