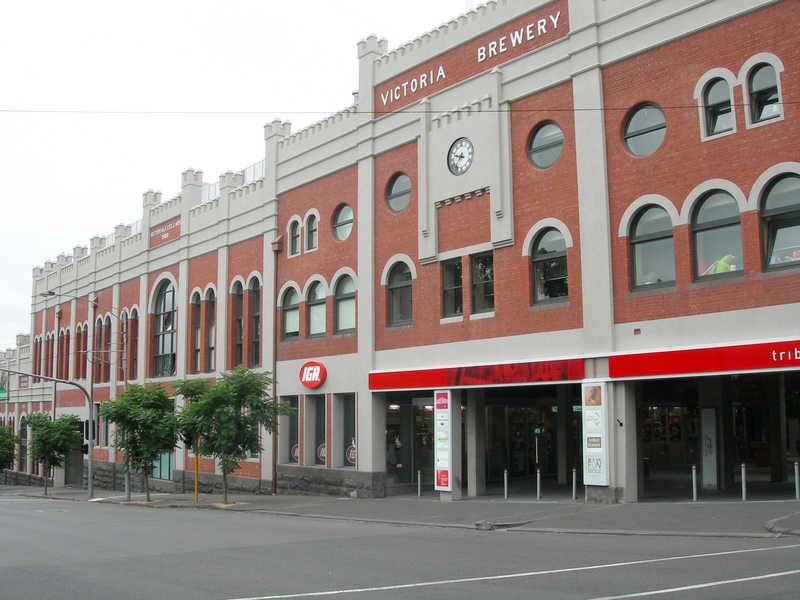 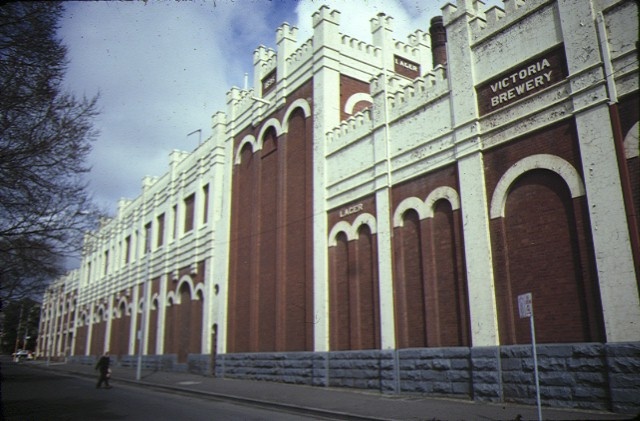 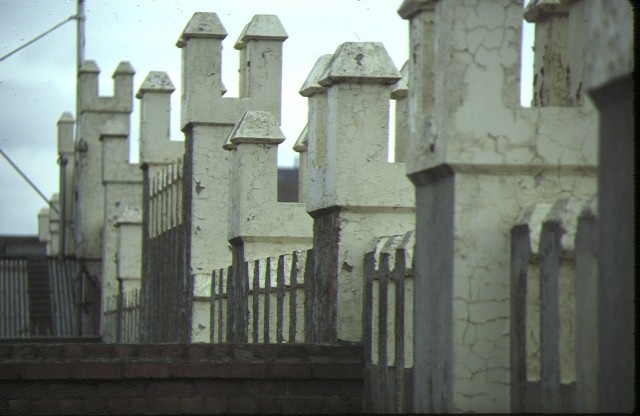 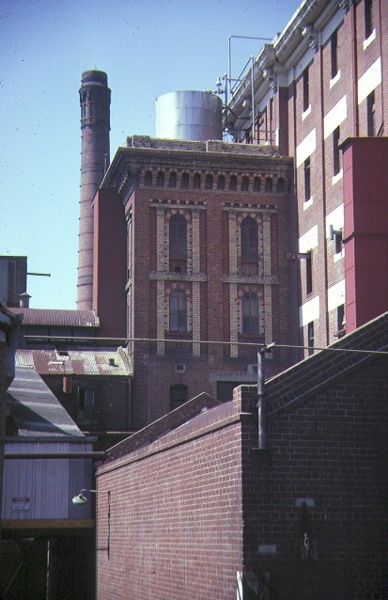 The former Victoria Brewery is made up of many utilitarian structures built from 1884 to 1940s. Mainly of tuck-pointed red brick with render bands and some polychromatic brick, the buildings are in an abstracted Romanesque style with semi-circular arched blind arcades and castellated parapets. The Old Tower, built in the early 1880s, is the oldest structure on the site. It is of polychrome brickwork with an unusual Medieval patterning to the cornice line. The No 1 Tower contains the largest collection of brewing equipment in Victoria. The No 2 Tower has a split-level format, tiled interior, stairs, balustrading and plants of domed copper, following the style of the Germanic brewing halls of the period. The street facades, all in the arcaded and castellated style, incorporate a small tower facing Powlett Street, and the words "Victoria Brewery - Lager Cellar Department - 1895" - and "Lager" in low relief. The north-eastern corner retains hermetically-sealed double skin insulation walls and kauri tanks. The Bitter Ale and Vacuum Cellars were constructed in 1908 in Victoria Parade and Powlett Street. In every case the castellated style was repeated along the perimeter. The Bitter Ale Cellars are similar in concept to the Lager Beer Cellars and display the words"Bitter Ale Cellars" - in low relief. From the 1920s to the 1940s further buildings were added, many designed by the CUB. Company architect T Weaver. These structures are utilitarian both in appearance and function and in several instances contain elements similar to those in the Lager Beer and Bitter Ale Cellars. The cellars define the laneways, known as the Engine House and Town Lanes and these thoroughfares date back to the earliest days of brewing activity on this site.

The former Victoria Brewery is of technical and architectural significance to the State of Victoria.

The former Victoria Brewery is of technical significance for its role in the development of Australian brewing. It is the longest-surviving brewery site in the State. From 1884 to the period of the First World War, the Victoria Brewery was a leader in the technological and scientific revolution in Australian brewing. The brewing plants follow the style of the Germanic brewing halls of the period, and are without equal in the State. The former Victoria Brewery is of additional technical significance for its associations with two brewers with world-wide reputations, Auguste Joseph F de Bavey and the American-German brewing expert, Augustus J Metzler.

The former Victoria Brewery is of architectural significance for its distinctive and comprehensive castellated style. It creates an architecturally unified complex. The street facades and towers create a dominant landmark on Melbourne's skyline. A number of buildings in the complex make significant individual contributions to the architectural significance of the complex, including the 1882 brewing tower in polychrome brickwork, probably designed by George Wharton, and the 1907 chimney stack. The former Victoria Brewery is architecturally significant for the contribution of noted architect William Pitt, who was also responsible for designing the Bryant and May building and the Princess Theatre. Pitt designed the castellated perimeter wall as well as, in consultation with Metzler, the Lager Beer Cellars.