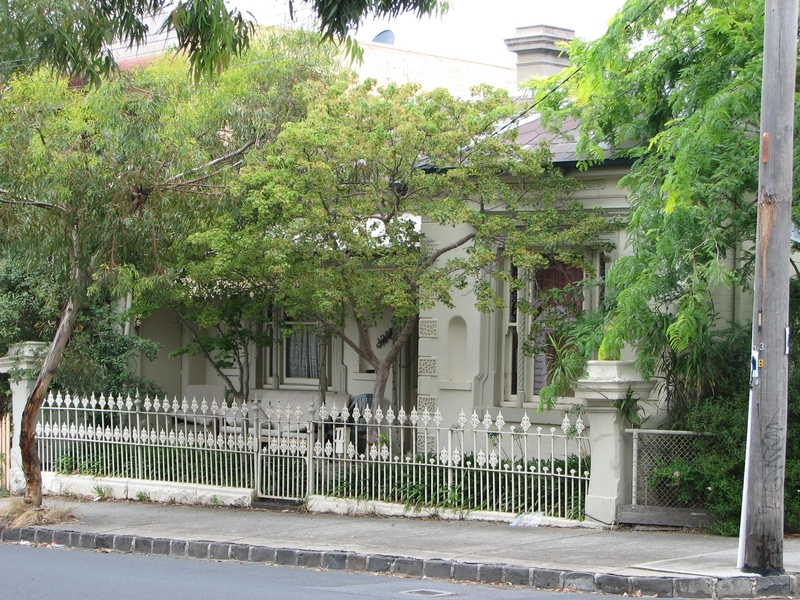 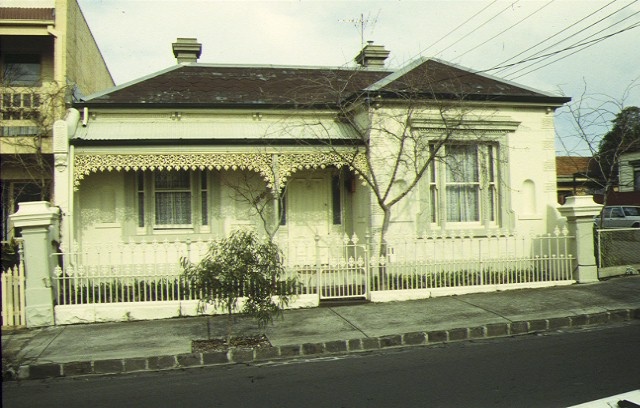 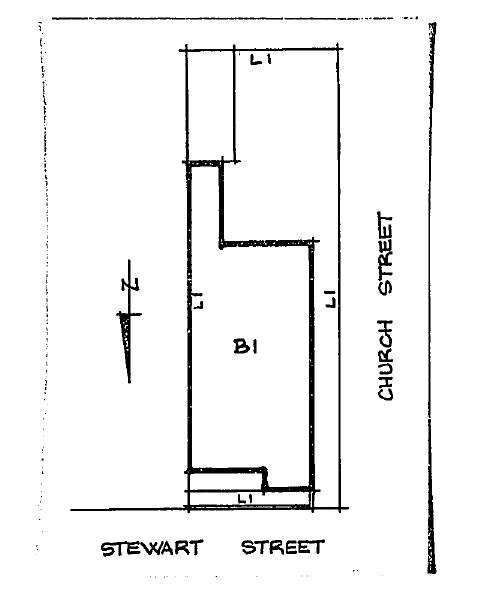 The Italianate Victorian style villa at 120 Stewart Street, Brunswick was built at the height of Melbourne's boom period, in 1887. The first owner of the single-storey, double-fronted, eight-roomed brick house was Cornelius Crow. He was possibly a tradesman highly skilled in interior decoration, or had a close association with Brunswick's building contractors. This clue to Crow's identity can be found in the formal front room on the east side of the house. Here in this space of rather modest proportion, is an unusually ornate painted and plastered, coved ceiling featuring seascape and mountain scenes. In the corner of the painted panel above the door can be distinguished the initials 'CC'. Across the hall, the corresponding front room is more ornately decorated with another six painted panels surrounded by intricate plaster mouldings covered in gold leaf. One of the most interesting of these scenes is the very recognisable view of Melbourne's Government House showing its distinctive tower from across the lagoons of the Botanic Gardens. In 1888 Crow sold the villa to local contractor, David Morgan, who may have been the builder for this house a year earlier. The house remained in the Morgan family until the 1970s, after being occupied by a number of tenants.

The house at 120 Stewart Street is of aesthetic and historic significance to the State of Victoria.

The house is aesthetically important for its decorated interior which is remarkably ornate for a domestic building of this size, and reflects the late nineteenth century preoccupation with elaborate finishes more usually associated with grander residences. The decorative scheme in the parlour (now lounge) with its coved plaster ceiling, ornate plaster mouldings covered in gold leaf, six landscape panels, and green painted finish, is exceptionally detailed and intact above the cornice line, and is representative of the skill, knowledge and spirit of late Victorian decorators and designs. The scheme in the bedroom, also decorated with six landscape panels, is less embellished, but shows the same degree of skill. The painted scenes are significant for their artistic qualities as well as for their potential to yield information on their locations which appear to be 'postcard' views of travel destinations, notably Melbourne's Botanic Gardens and Government House, and the well-known nineteenth-century view to Hobart and Mt Wellington from Bellerive. The lower walls of these rooms, and the more simply decorated entrance hall have been painted over, but importantly have the potential to reveal more of the original scheme underneath the surface.

The interior is historically important for its associations with Melbourne's lively, late nineteenth-century network of highly skilled crafts and tradesmen, amongst whom the artist and first owner of this house, Cornelius Crow, can be included.