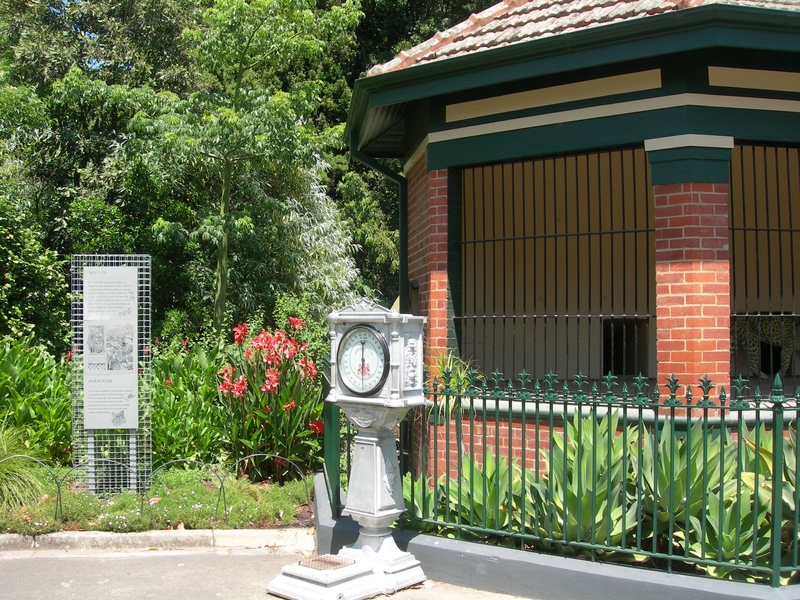 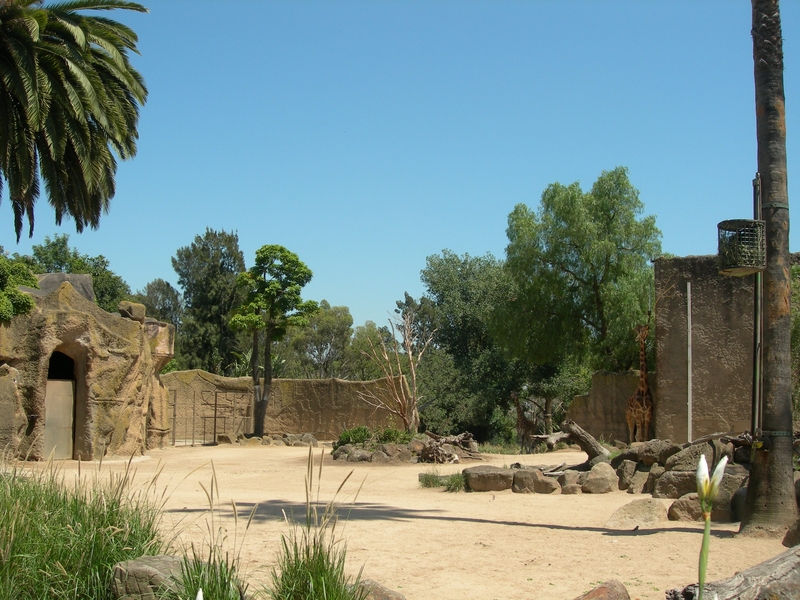 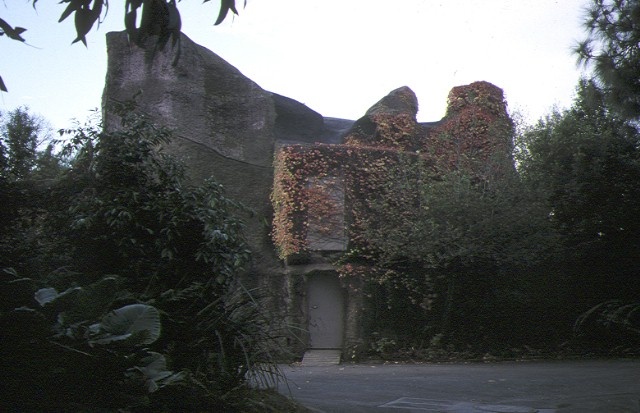 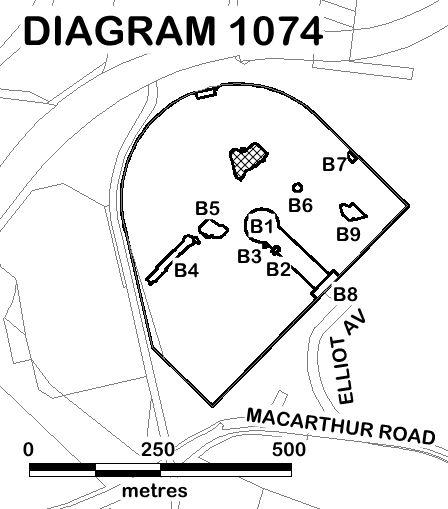 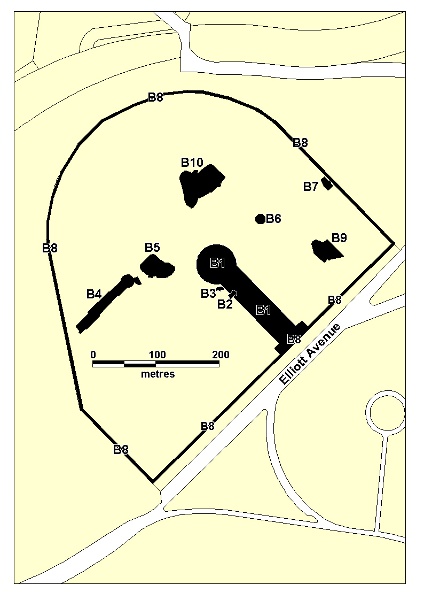 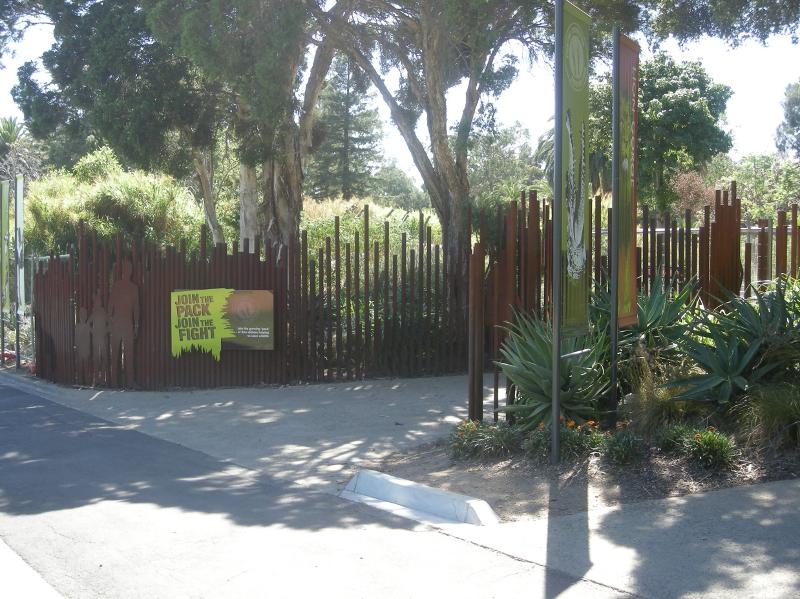 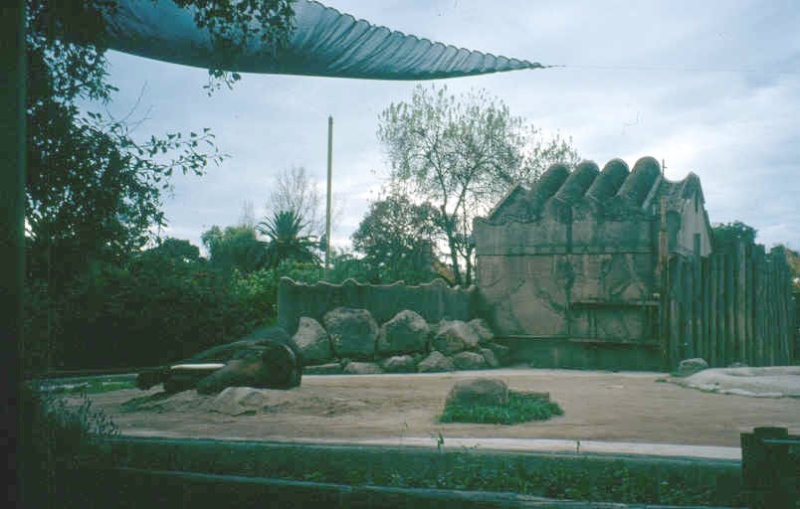 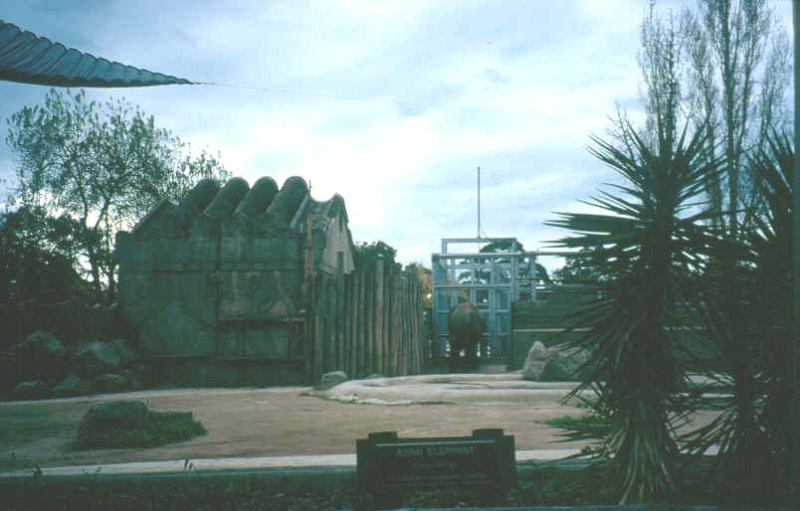 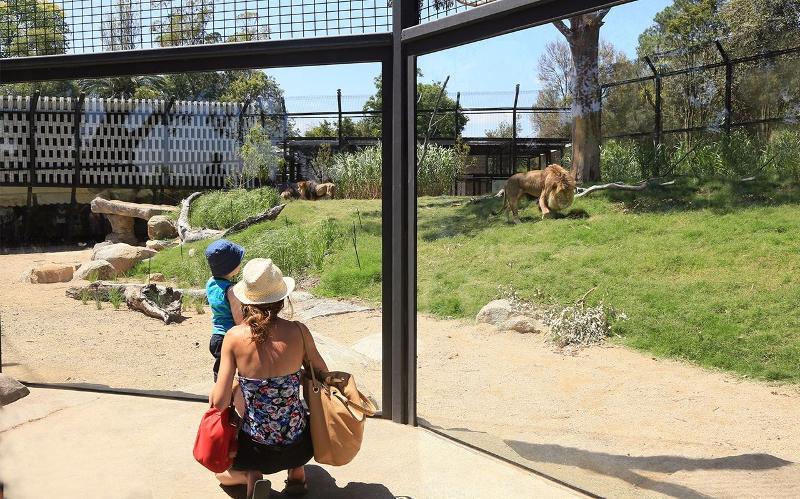 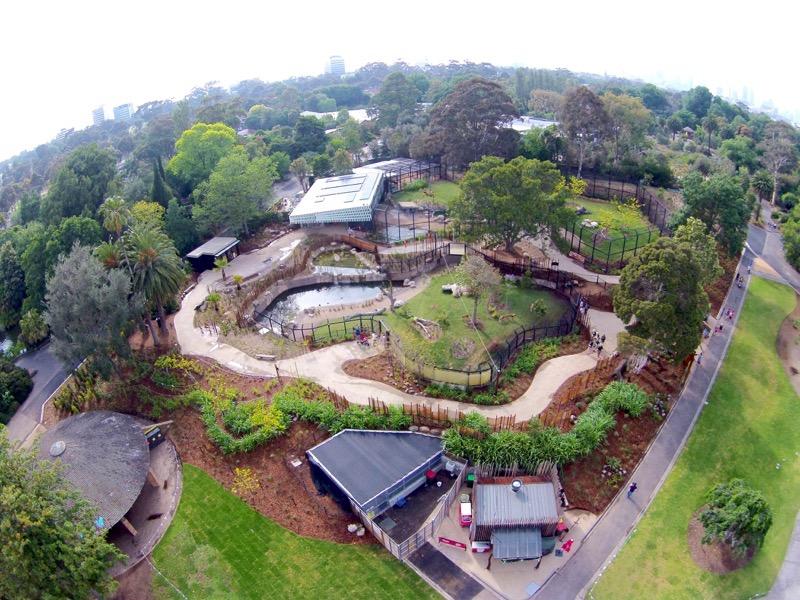 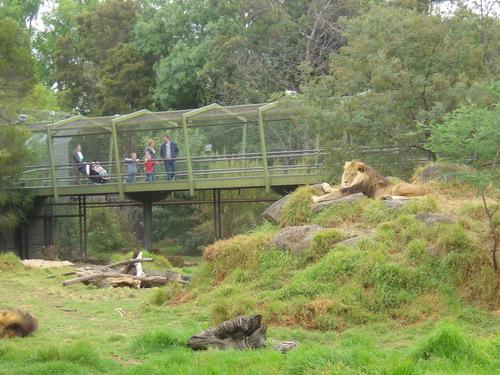 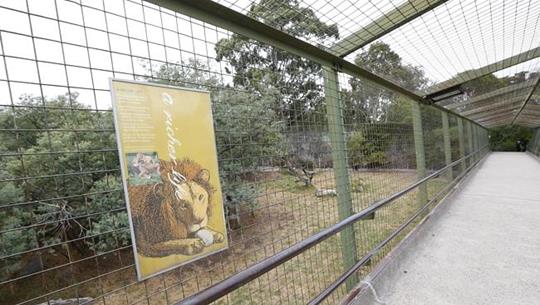 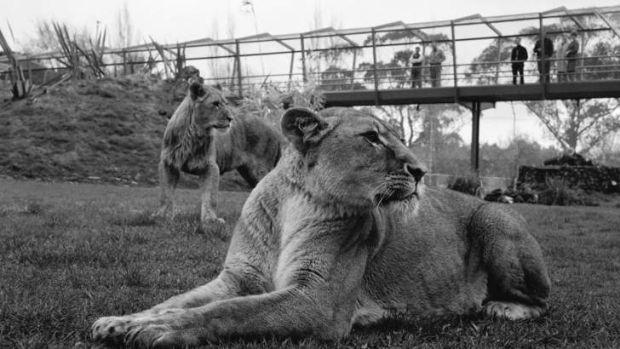 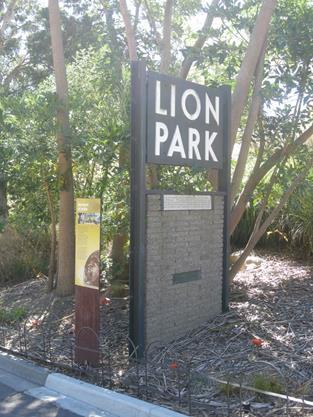 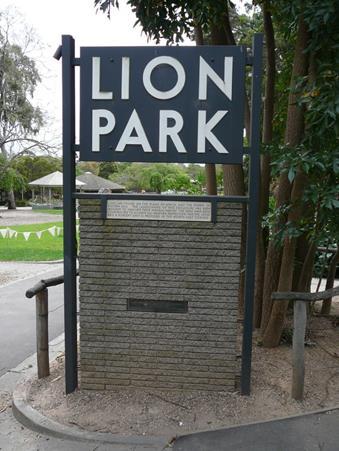 The Royal Melbourne Zoological Gardens (now known as the Melbourne Zoo) is the oldest zoo in Victoria and Australia and opened in 1862. Prior to this, animals procured by the Zoological Society of Victoria were kept in rudimentary enclosures at Richmond Paddock opposite the Botanic Gardens. These animals were brought to Victoria to enrich the purses and sensibilities of its colonists - birds that would sing sweetly or consume fruit-eating insects, fish for the rivers, and game and grazing animals for bush and paddocks. The importation of animals from other countries was known as 'acclimatisation' and influenced the Royal Melbourne Zoological Garden's early development. The popularity of the Zoological Gardens at Regent's Park in London (1826) also lent weight to its establishment, as did a drive to demonstrate civic development during the Victoria's growth after the gold rushes. In the first three decades following the 1870 appointment of director Albert Le Souef, exotic animals were procured for public display, entertainment became a central function and the Zoo and its attractive gardens were established as a major recreational and cultural feature in Melbourne. In the 1960s discussions around the world regarding the value and role of zoos led to a change in perspective within the international zoo community and Melbourne Zoo began to transform its presentation and treatment of animals. The present-day Melbourne Zoo continues to remodel and redevelop its facilities to better address its objectives of conservation, research and education.

The Royal Melbourne Zoological Gardens occupies a 22 hectare (55 acre) site in Royal Park. It contains significant buildings and features, including the

. Formal Garden Layout and elephant statue: the area adjoining the Zoo's axial main drive - a principal feature of the early Zoo site design - beginning at its 'front' (Elliott Avenue) entrance and crossed by other paths perpendicular to it. These intersections are marked by circular garden beds, the north-westernmost one of which contains a statue of a rampant elephant;

. Former Mandrill House: also known as the Orang-utan House, together with the adjacent

. Great Flight Aviary: an approximately 120m-long steel mesh-clad tall structure of parabolic cross-section framed in steel arches and at its north-east end terminating in an elongated-spheroidal dome. It originally opened in 1934, and in 1980 re-opened following a fitout with new walkways and rainforest, wetland and scrubland environments;

. Giraffe House and Enclosure: a partially-moated enclosure with perimeter buildings which feature ferro-concrete simulated natural rock surfaces. The shape of the largest building is apparently also based upon the topography of Mount Buffalo;

. Octagonal Aviary: this building was initially occupied by monkeys before being used as originally planned as an aviary. Red face-brick piers support rendered and painted architraves and a segmented iron-framed domical roof. Large openings in four of its eight sides are enclosed with steel mesh.;

. Perimeter Fence: the Zoo's perimeter is defined by a tall masonry wall, the Elliott Avenue-facing portion of which features chevron capping and panels of herringbone-patterned brickwork;

. Front and Back Gates: the Zoo's 'Front' entrance on Elliott Avenue is a 1939 moderne-style building with upper-storey windows framed by stylised letters that form the word 'ZOO'. The subsidiary 'Back' entrance at the Zoo's northern end provides visitors with access from Royal Park railway station and Stop 25 on the 55 tram route; and

The Royal Melbourne Zoological Gardens is of aesthetic, architectural, cultural, historical, scientific and social significance to the State of Victoria.

It satisfies the following criterion for inclusion in the Victorian Heritage Register:

The Royal Melbourne Zoological Gardens is significant at the State level for the following reasons:

The Royal Melbourne Zoological Gardens is historically significant as the oldest zoo in Victoria and Australia. It has had a clear and continuing association with the display of animals for education and public viewing since 1862. Melbourne Zoo demonstrates nineteenth-century Victoria's determination to provide progressive public institutions of an international standard despite its relative youth and isolation. [Criterion A]

The Royal Melbourne Zoological Gardens demonstrates developing and evolving practices in the care, housing, display and interpretation of zoo animals since 1862. A number of its buildings and structures - such as the Octagonal Aviary (1928), the former Carnivore's Food Preparation Room (1930s), and the former Mandrill House and Monkey House buildings (both 1928) - demonstrate the changing philosophies which have underpinned the display and care of animals in captivity, and the ways in which those animals have been viewed and interpreted by visitors. [Criterion A]

The Royal Melbourne Zoological Gardens is aesthetically significant as a formally designed zoological garden landscape which has been appreciated and valued by the community since the 1860s. Its central entrance pathway with formal garden beds and tree plantings exemplify the zoo's nineteenth century design sensibility. The importance of its aesthetic qualities is demonstrated in the popularity of the place as a tourist destination over a long period for education and recreation purposes. For more than 140 years, the main drive held renowned mass displays of seasonal flowers, a horticultural tradition which has recently changed to feature displays of drought-tolerant natives.[Criterion E]

The Royal Melbourne Zoological Gardens is of scientific significance as a centre of zoological research and animal keeping in Victoria since its establishment in 1862. It contains animal enclosures which were highly innovative for the periods in which they were built, including the Great Flight Aviary (1934, redeveloped 1980), the former Elephant House and Enclosure (1944), and the Giraffe House and Enclosure (1913). These places demonstrate highly creative adaptations of materials and technology. The Zoo continues to deliver conservation and education programs that promote knowledge of and respect for animals and their natural environments. [Criterion F]

The Royal Melbourne Zoological Gardens is socially significant to the wider Victorian community. Generations of Victorians from metropolitan and regional areas have visited Melbourne Zoo since 1862. There has been a regular and long-term engagement by the community with this place for the purposes of learning and recreation, and it has been a popular destination for school excursions. The zoo is also regularly visited by national and international tourists. [Criterion G]

The Royal Melbourne Zoological Gardens is historically significant for its association with the lives and works of three of its former directors. Albert Le Souef (1870 to 1902) and his son Dudley Le Souef (1902 to 1923) are internationally recognised for their pioneering contributions to the body of scientific knowledge regarding the care and display of animals. Alfred Dunbavin Butcher (1962 to 1987), chairman of the Board of the Royal Zoological Society of Victoria, began an ongoing process of transformation in which the design of and habitats within the Zoo's enclosures better accommodate many aspects of species' instincts.