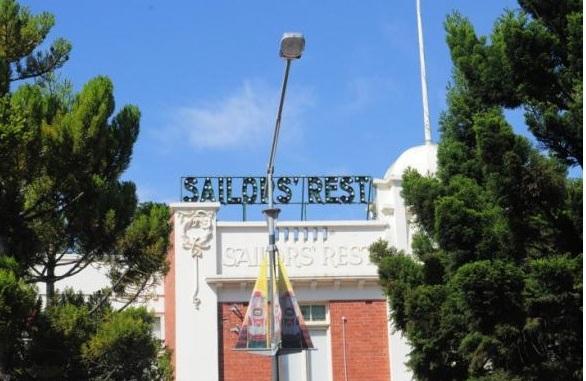 The King Edward VII Sailors' Rest building was built in Geelong to a design by the Geelong architect, Percy Everett in 1912. The Sailors' Rest was an evangelical temperance organisation designed to provide welfare services to sailors; to attempt to divert them away from alcohol and other temptations of the town and to encourage them to return to or continue to practice Christianity. In order to attract more sailors to the 'Rest' an electric bulb sign was installed in 1926. The animated sign operated with flashing letters and words and was intended to be very noticeable from Yarra and Cunningham piers as the sailors disembarked. The sign was built by the nearby Melbourne Electric Supply Company and donated to the Sailors' Rest by Howard Hitchcock former mayor of Geelong and Chairman of the Sailors' Rest Committee. The sign is understood to have ceased operation from the 1950s until 1997 when it again operated but without animation.

The Sailors' Rest Electric Sign consists of galvanised steel trough letters containing light bulbs spelling "SAILORS' REST." The bulbs are held by porcelain, Edison Screw lamp holders held in a galvanised steel plate fitted to the interior of each letter. The letters are held in a rectangular galvanised pipe frame with four diagonal bracing arms travelling from the top back of the frame to the roof of the King Edward VII Sailors' Rest building. All these sign components except the bulbs and lamp holders are painted dark green. The original steel conduit containing twelve original wires runs from a downward facing bell-mouth fitting on the wall next to the sign, to just above the floor of the hexagonal domed room nearby, where there is a galvanised steel plate tacked to the floor. The original electromechanical drum controller (now lost) rested on this plate. The original single earth wire runs from the sign frame to the conduit. The surviving original wiring consists of tinned copper wires covered with waxed cotton and insulated with vulcanized rubber.

This site is part of the traditional land of the Wadawurrung people.

The Sailors' Rest Electrical Sign is of historical and social significance to the State of Victoria. It satisfies the following criterion for inclusion in the Victorian Heritage Register:

Criterion A Importance to the course, or pattern, of Victoria's Cultural History

The Sailors' Rest Electric Sign is significant at the State level for the following reasons:

The Sailors' Rest Electric Sign is historically significant for its use in the advertising and promotion of welfare services, the Temperance Movement and Christianity to sailors. It demonstrates the zeal and commitment of the Temperance Movement, which led to many changes in Australian society. It is historically significant for its landmark quality from the waterfront and wharves, and has been appreciated by visitors to the waterfront for nearly ninety years. [Criterion A]

The Sailors' Rest Electric Sign is socially significant for its association with the long-standing and continuing relationship with seafarers visiting Victorian ports from the 1850s to today. It is tangible evidence of a charitable Christian organisation valued by thousands of sailors past and present. [Criterion G]

The Sailors' Rest Electric Sign is also significant for the following reasons, but not at the State level:

It is one of very few surviving historic electric signs in Geelong.

It is associated with a former mayor of Geelong, Howard Hitchcock.

It is a well known and visible landmark in Geelong.

It is associated with the Geelong branch of the Melbourne Electric Supply Company which made the sign and supplied electricity for it.