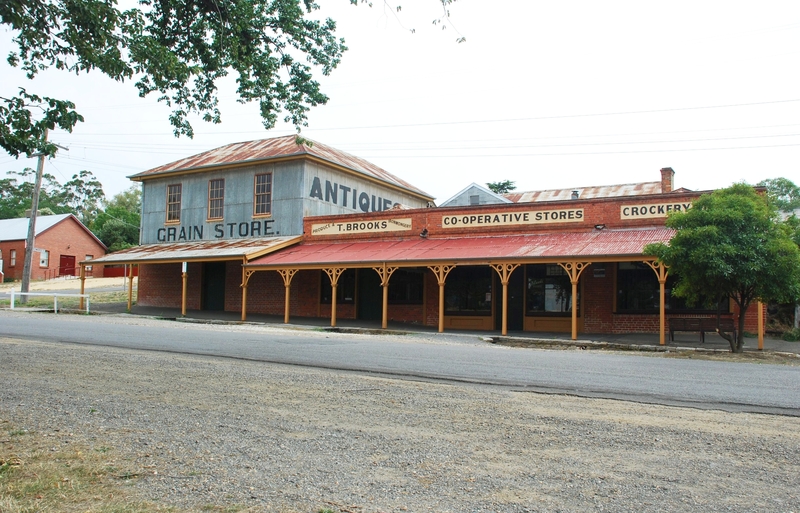 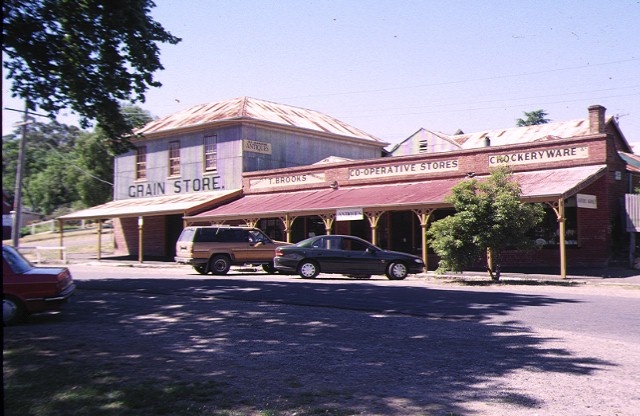 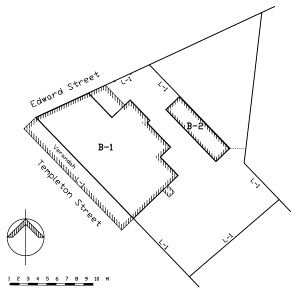 What is significant?
Brooks Store, (former Co-operative Store), Maldon, is a relatively intact building, initially constructed 1866, and extended 1868, by the Maldon Co-operative Store Trading Company. John Brooks further extended the complex after purchasing it in 1872. The Brooks family conducted a general store on the premises until 1986. The building complex, on two levels, is cut into the sloping site. The original 1866 and 1868 section of the store, on the lower level, is a single storey parapet fronted brick building with stone walls below natural ground level.. A restored verandah extends the full Templeton Street facade. Two rear store rooms are on the higher level, one of brick over the vaulted room with a small fireplace, the other timber framed and clad in corrugated iron. The two storey grain store extension on the corner of Templeton and Edwards Streets, in brick and stone, and the top storey clad with corrugated iron, was built by John Brooks. The Co-operative store is an unusually intact building type with timber posted verandah, paned display windows, high shelving, pine boarded ceilings and skylights. Much of the internal fixtures and fittings still exist in-situ. The interior timber work is unpainted or oiled and only some of the interior walls have been whitewashed or painted. The original timber framed stables still stands, though extended several times, with the original roof shingles under the existing corrugated iron clad roof. Early timber troughs exist along with well worn brick floor paving.

How is it significant?
Brooks Store (formerly a Co-operative Store) is of historical and architectural importance to the State of Victoria.

Why is it significant?
Brooks Store is rare in its ability to demonstrate historical associations with the early co-operative movement on the goldfields.

Brooks Store is of architectural interest as a rare and generally intact 19th century country store complex initially constructed in 1866 with few alterations/additions since the 19th century, with ownership for 114 years till 1986 with the Brooks family.