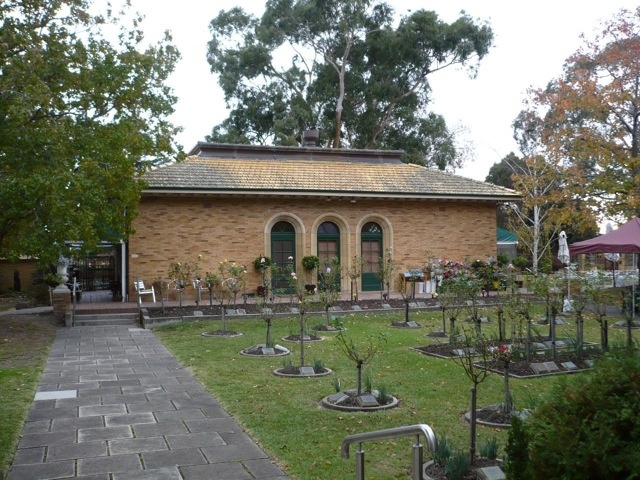 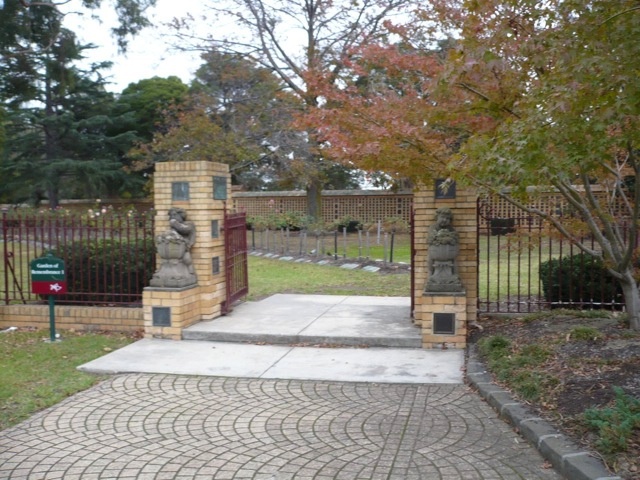 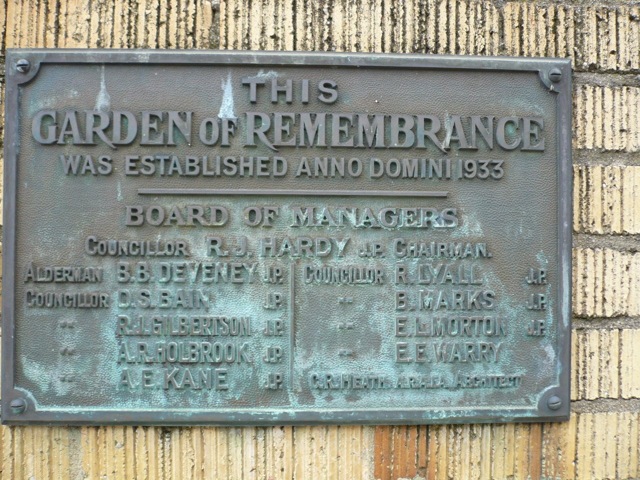 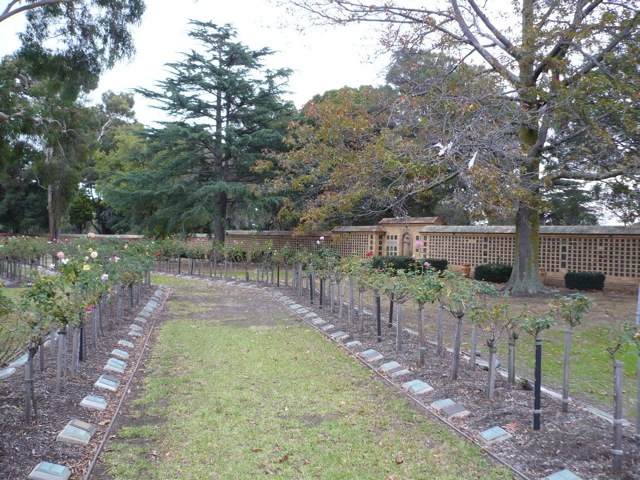 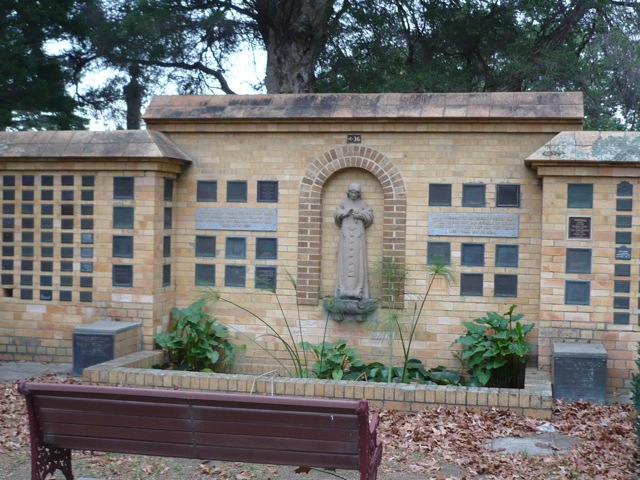 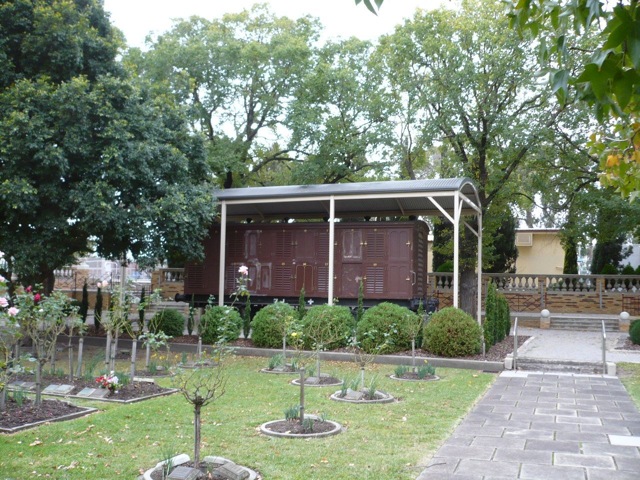 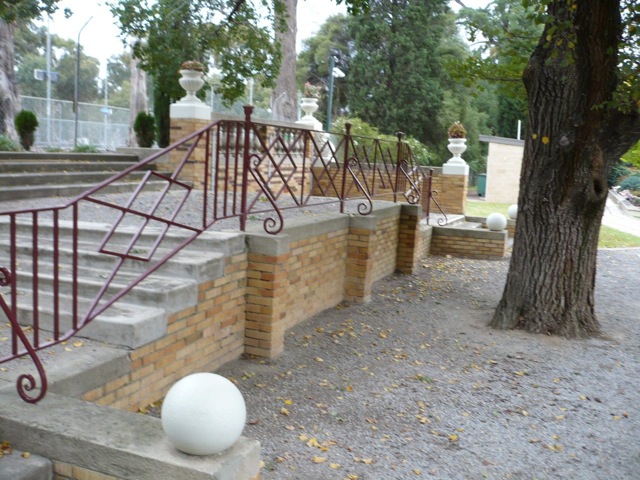 What is significant?
Fawkner Memorial Park at 1187 Hume Highway, Fawkner is significant. The following features and elements contribute to the significance of the place:

- The cemetery layout, which is based upon the original plan prepared by Charles Heath.
- The buildings, structures and features designed by or under the direction of Charles or Frank Heath including the Tearooms and its associated formal landscape setting including terraces and mature Elms (Ulmus procera) and Canary Island Palms (Phoenix canariensis), the Garden of Remembrance 1 and Rose Urn Garden and associated mature plantings including a Pin Oak (Quercus palustris), Cedar (Cedrus sp.), Lemon-scented Gums (Corymbia citriodora) and Cypresses (Cupressus sp.), Garden of Remembrance 2, the bridges over Merlynston Creek at Fourth, Sixth and Seventh avenues, the Jewish Chapel and the Islamic/Muslim Chapel, the Charles Heath Fountain (as constructed c.1952 excluding the 1994 additions) and the R.J. Hardy Memorial Fountain.
- The formal landscape setting along Fourth Avenue comprising mature English Elms (Ulmus procera) between First Crescent and Fourth Crescent with a central plantation comprising mature red standard roses.
The remnant mature plantings along Second Avenue (Quercus robur and Cupressus sp.), Fifth Avenue (Ulmus procera), Second Crescent (Cupressus macrocarpa), and the extension of Fourth Crescent east of the Jewish Chapel (Cupressus macrocarpa)
- The traditional and picturesque cultural landscape within the area generally to the south of Merlynston Creek, which comprises the earliest memorials set within mature trees. The significant mature plantings include exotic trees of the genus Pinus, Cupressus, Quercus, Ulmus, Fraxinus and Phoenix canariensis, as well as some remnant and introduced native species, predominantly Eucalypts.
- The former mortuary carriage
- The 'Old Pioneers cemetery' and the John Batman memorial
- The Jewish Pioneers cemetery
- The entry gates, relocated to this site from the Melbourne Fish Markets.

How is it significant?
Fawkner Memorial Park is of local historic, social, architectural and aesthetic significance to Moreland City.

Why is it significant?
Fawkner Memorial Park is historically significant as one of two 'modern railway' cemeteries established in Victoria in the early twentieth century, which represented a new approach to cemetery planning. Unlike the other example at Springvale, which has lost its railway connection, the strong association to the railway is still demonstrated at Fawkner by the railway station and the rare example of a mortuary carriage, now on display adjacent to the station. (Criteria A).

Fawkner Memorial Park is historically significant as the repository of the remains relocated from the first Melbourne General Cemetery in North Melbourne. The Old Pioneers and Jewish Pioneers sections are of particular significance for the association with Melbourne's pioneers, and the associated gravestones are significant for being among the State's earliest funerary artefacts. The John Batman monument is of historical significance for its associations with man often referred to a Melbourne's founder and has important associations with organisations such as the Old Pioneers and the Australian Natives Association, which lobbied for its erection and held annual ceremonies at the memorial over many decades. (Criteria A & H).

Fawkner Memorial Park is historically and socially important for its representation of burial practices, religious affiliations, values and tastes during twentieth century. The Jewish Chapel and Islamic Chapel are significant as evidence of the growth of non-Christian denominations during the twentieth century. Fawkner Memorial Park is particularly significant as the site of Victoria's first 'modern' crematorium, which played an important role in making cremation an accepted burial practice in Victoria. Although the original crematorium has been demolished, the columbariums and memorial gardens provide evidence of the growing popularity of cremation during the 1930s. Fawkner Memorial Park is also significant as the place where the first public Mausoleums were established in Victoria. (Criteria A & G)

Fawkner Memorial Park is architecturally and aesthetically important as a fine example of a 'memorial lawn' cemetery, which is notable for its sophisticated layout that demonstrates prevailing nineteenth-century Picturesque and Classical ideals about cemetery design, as well as influence of the 'garden suburb' movement that emerged in the early twentieth century. This value is significantly enhanced by the central focus of the Charles Heath fountain, the buildings, structures bridges designed by Charles or Frank Heath, the mature trees along the main axial roads and throughout the various sections, and the large collection of gravestones and other examples of funerary art which form a major visual element of the cemetery landscape. The Tearooms and the associated formal gardens, Garden of Remembrance and Rose Urn Garden are especially notable as a particularly intact ensemble that is one of the finest twentieth century formal cemetery landscapes in Victoria. (Criteria D, E & F)

Fawkner Memorial Park is of historical and aesthetic significance for its rich and remarkable collection of monuments dating from the 1850s onwards, which demonstrate changing customs and attitudes associated with the commemoration of death. Many monuments are notable for their fine or unusual design. The collection charts the lives and deaths of many ordinary as well as prominent Victorians. The large number of graves to notable Victorians reflects the increasing importance of the Cemetery as the main burial area for the northern suburbs of Melbourne in the early twentieth century. (Criteria A, D & E)