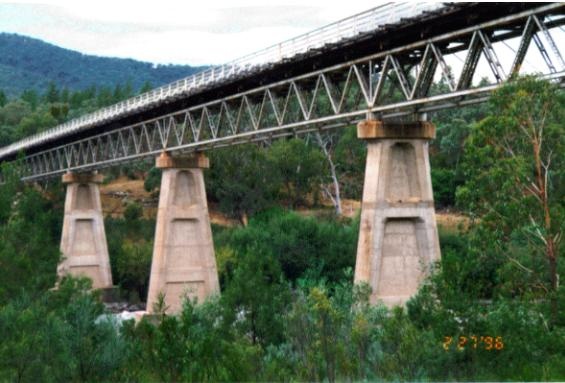 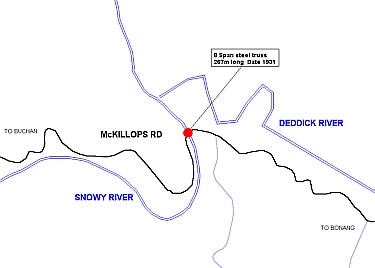 What is significant?
McKillops Bridge is a road and live-stock bridge situated on the Bonang-Gelantipy Road across the Snowy River. It consists of welded-steel trusses seated on tall one-piece reinforced-concrete piers, supporting an elaborate timber stockbridge superstructure. That traditional colonial-style timber superstructure seated on crossheads above the trusses has shaped corbels, square-timbered stringers, spiking planks, transverse timber decking (now with running planks), gravel beams, and elaborate side rails. The deck is 255 metres long. The bridge was built by the Country Roads Board in two stages between 1931-36, during which its height was raised after the original bridge superstructure was washed away in record floods of January 1934, prior to its original official opening. In its reconstructed form the original concrete abutments were turned into additional piers and the welded-steel trusses were cantilevered back over them to meet the new higher road approaches. The bridge is approached through some of Victoria?s grandest scenery, and spans a broad, deep and spectacular gorge of the upper Snowy near its junction with the Deddick River.

McKillops Bridge is of historical, scientific (technical), and aesthetic significance to Victoria.

It is of historical significance for its particular association with Victoria's long and important pastoral history. It is sited at ?McKillops Crossing?, named after pioneer overlanding squatter George McKillop who crossed here in 1835. This was a stock crossing place for almost a century before the bridge was constructed, and many of the livestock that had been used to open up vast tracts of the Port Phillip District for pastoral occupation had come this way from the high Monaro of New South Wales. It had long been the site of the famous ?turnback? ferry. Built largely to allow the easy passage of livestock across the high country and between NSW and Victoria, it is a rare example of a major livestock bridge, and one of very few surviving timber bridges of this type. It is also significant as part of a Developmental Road scheme, wherein the catchments of the Upper Snowy River were opened up for closer settlement largely through the instrumentality of the CRB. McKillop?s Road, built through remote forest lands to encourage rural settlement, and the bridge, represent the very essence of inter-war Developmental Road theory.

It is of scientific (technical) significance:- as an exceptionally long timber or part-timber bridge, and as the longest example of timber deck metal truss bridge in Victoria; as a bridge of exceptional height; for its elaborate timber stockbridge and horse-vehicle superstructure; for its excellent integrity and condition; and as a rare surviving example of a concrete, metal-truss and timber bridge. It combines a colonial era all-timber stockbridge with the (then) latest welded-steel technology. CRB experimentation with electric arc-welding, combined with the necessity for economic innovations during the Great Depression, resulted in the bridge being at the leading edge of world technology. The arc-welding technique was thought to be in advance of British technology at the time, and also created interest in America. It was claimed to be the longest arc-welded steel truss road bridge in the world, and regarded as one of the standing wonders of Australian road-bridge engineering.

The bridge is of aesthetic significance for its impressively long and handsome timber stock-bridge superstructure, combined with modern bridge technology of grand proportions, viewed against a panoramic backdrop of mountain forest and a magnificent Alpine river-gorge. It is also a vantage point from which to appreciate something of the awe felt by pioneer pastoralists picking their way through rugged high-country mountain passes, and the landscape of the Snowy River which is at the core of much of Australia's balladry, folk-legend and mythology.