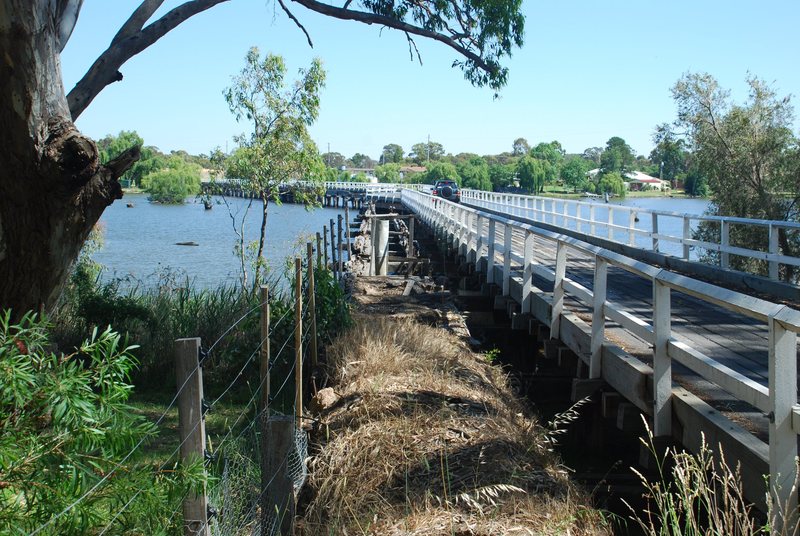 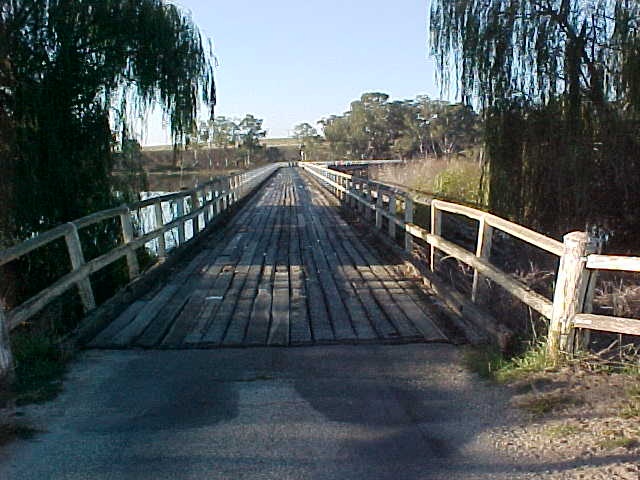 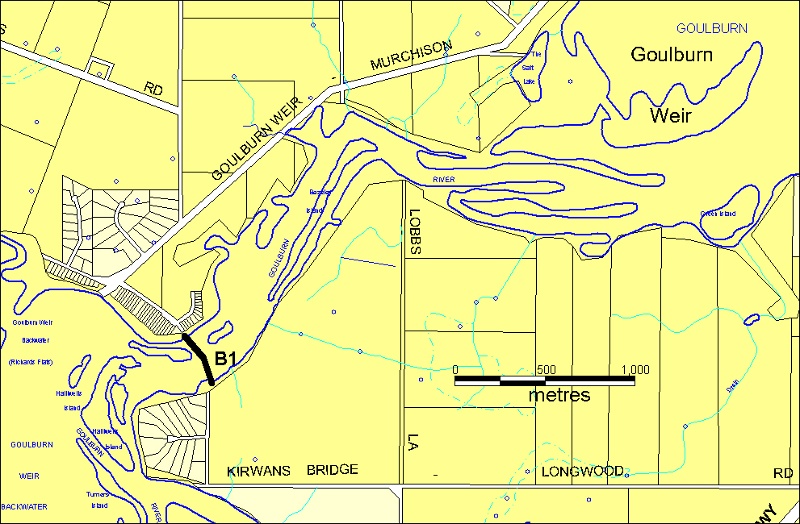 What is significant?
The 310 metres long Kirwans Bridge is situated over the Goulburn River at Bailieston near Nagambie. It was opened in 1890, and is still in use for (one-way) motor traffic. The only comparable timber bridge in Victoria in terms of length is the 1927 Barwon Heads Bridge which is 308 metres long. In 1955 the bridge was modified by the construction of a new superstructure, in which its timber beams were replaced by RSJs, and its deck narrowed to single lane, with passing bays maintaining the full 21 feet (6.3 metres) original width. The bridge retains its original forty-eight spans of sixteen and a half feet (5 metres), and its original seven main river-channel spans of thirty-three feet (10 metres). Its tall timber trestles are largely immersed under Lake Nagambie. Remnants of its original squared beams and strutted corbels - one of only two remaining examples in Victoria - are clearly visible beside the bridge.

The bridge features a dramatic mid-stream bend, and is also unique in its incorporation of two vehicle passing-bays. It is set at the northern arm of Lake Nagambie, a very popular boating and fishing venue close to Melbourne. The distinctive and imposing nature of the bridge has seen it feature in State-wide commercial and social promotions.

How is it significant?
Kirwans Bridge is of historical, scientific (technical) and aesthetic significance to Victoria.

Why is it significant?
It is of historical significance as a work directly associated with Alfred Deakin's dream of a great 'National' irrigation system based upon the construction of the Goulburn Weir. Consequently, with nearby Chinamans Bridge, it was built entirely with Victorian government funds, a factor in its large size. When opened in 1890, it provided access to Nagambie and the railway for the mining areas of Bailieston and Whroo. So significant was the access to Nagambie it provided for those living on the west of the Goulburn River that a threat to the bridge's continuing future in the mid-1950s led to a municipal secession movement that enlarged the Shire of Goulburn at the expense of Kirwans' original builders, the Shire of Waranga. The current narrowed timber deck with passing bays, supported by rolled steel joists placed over the ancient piers, remains a memorial to that municipal protest. It is one of Victoria's very oldest timber road bridges still in operation; very few are earlier. Kirwans Bridge is also one of a unique group of four large timber road bridges from the 1890s, of contrasting types, located on the Goulburn River between Seymour and Murchison; this is the last remaining group of large old timber river bridges in Victoria.

It is of scientific (technical) significance as one of only two extant Victorian timber bridges retaining vestiges of a colonial 'strutted-corbel' type of river-bridge design. Only at Kirwans Bridge and the Jeparit Bridge is it now possible to study examples of this historic European form of timber-bridge craftmanship. Although its visual effect is not greatly different from that of the equally rare and historic 'strut-and-straining-piece' design of nearby Chinamans Bridge, the detail and mechanics of the stringer-support system are structurally different. Kirwans Bridge also provides a remarkably successful example of engineering adaptation to changing vehicle needs over more than a century. It has an exceptionally long timber deck; no road bridge in Victoria is longer.

It is of aesthetic significance as a predominantly-timber structure whose exceptional length is accented by full timber side-rails, and which features a pronounced mid-stream bend and unique vehicle passing-bays. This aesthetic quality, unique in Victoria, is accentuated by the bridge's setting just above the broad waters of Lake Nagambie.