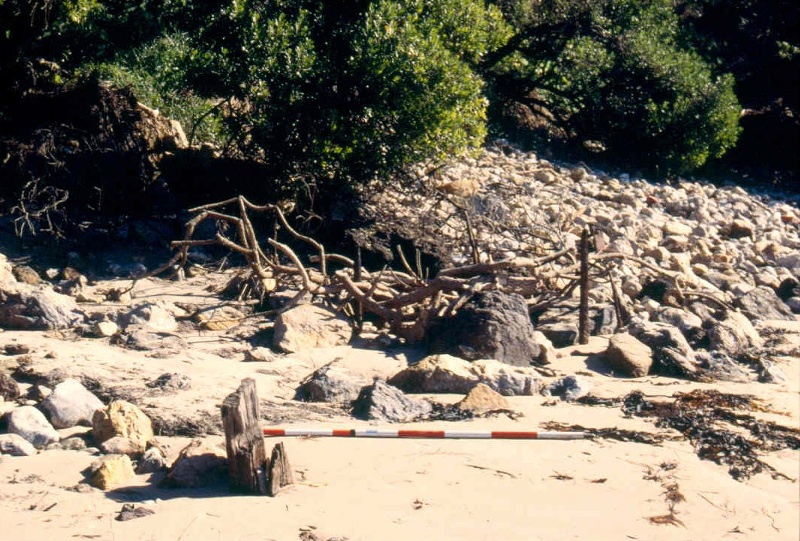 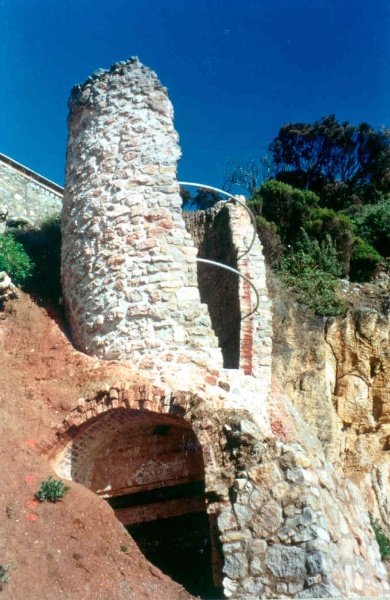 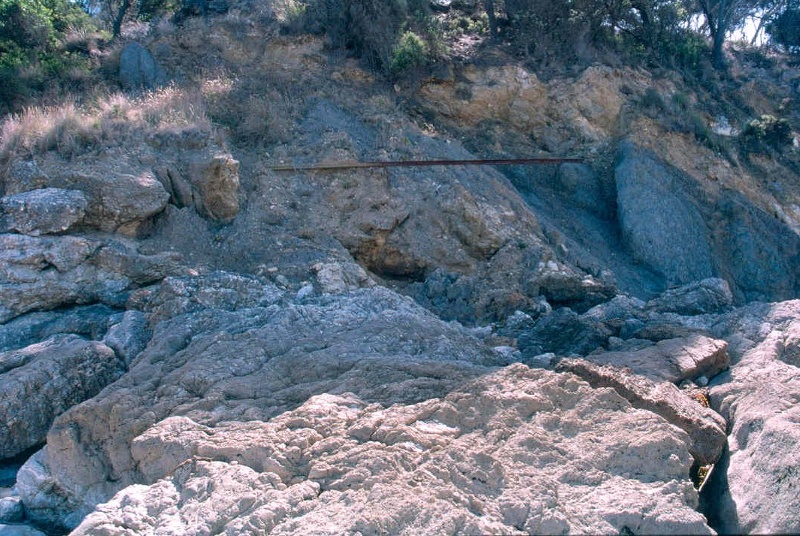 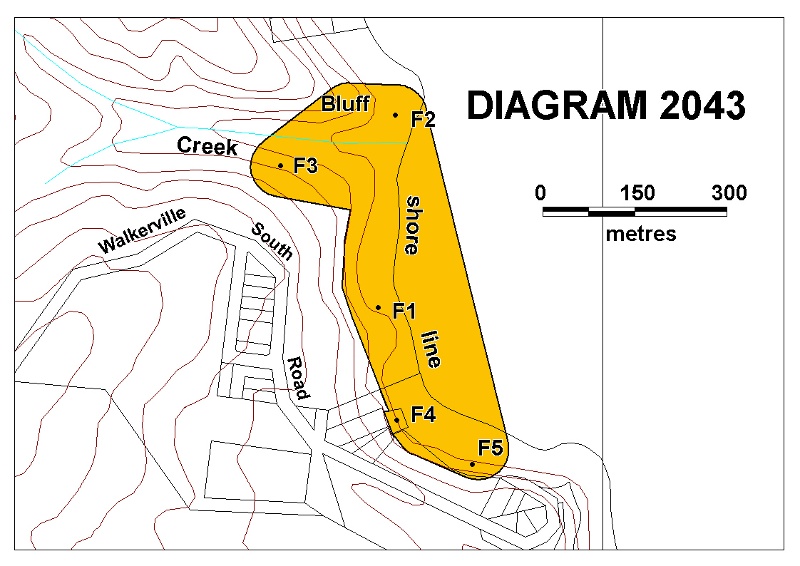 What is significant?
The Walkerville Lime Kilns and the associated remnant site features including the jetty, tramway, quarry, cemetery and archaeological remains of the township are situated on the western shores of Waratah Bay between Cape Liptrap and Wilson's Promontory, approximately 180 km south-east of Melbourne. In 1850s a ship named SS Waratah captained by William Bell, became disabled with a damaged rudder while rounding Wilson's Promontory on its way between Sydney and Melbourne, and sought shelter in the bay and reported it to be a good, safe anchorage; thus giving rise to the name Waratah Bay.

In 1875 William Millar a local farmer, who had leased land at Yanakie, reported the existence of deposits of limestone in the cliffs around Waratah Bay. Lime burning leases were issued in 1874 to Miller and partners W.R. Kissane, J. Read, H.F. Urich, R. Bright, I. Newbery, and William. Wischer. They called the enterprise Waratah Bay Lime, Marble and Cement Company Limited. In 1875 Millar approached the firm of Bright Bros., shipping agents in Melbourne, and suggested they invest in a scheme to build lime kilns close to the stone and produce quick lime. Mining began in 1878. Bright Bros. operated the kilns successfully for several years then sold the operation to Wischer, who engaged James Dewar as the works manager. In 1880 William Froggart Walker, who was the Commissioner for Customs in Melbourne, went into partnership with Wischer and it was after Walker that Walkerville was named. In 1895 Mr A. A. McCrae acquired the business and operated the kilns until about 1923, when they were purchased by Mr W. Hughes and with his son Jim, he carried on lime burning until the kilns closed in 1926 due to reduced demand and increased transport costs. As no other employment was available in the vicinity the employees left the township to find work elsewhere, taking their families with them, leaving Waratah almost deserted.

At the peak of production, around 1890, up to eighty men were employed either directly or indirectly in the mining of lime. As these workers settled on the shores of Waratah Bay they built cottages for their wives and families and within a few years a busy township had developed with a Post Office, School and General Store. It was reported that at the turn of the century the lime industry at Waratah supported fifty families.

Kilns: Six kilns (numbered 1-6 from south to north) were constructed at Walkerville. Each kiln was about 40 feet deep, brick lined and tapering to a narrow neck at the base, where a grate opened into the back of a large shed. The kilns were built separately, some distance apart, faced with local stone (granite and basalt) and each had its own storage and packing shed. The shafts were supported by a high vertical stone wall across the front, which itself was supported by two long retaining walls extending outward at an angle from each end of the vertical rear wall. At the base of the vertical facade is a brick-lined arched chamber or vault, 2. 5 m wide, 2 m deep and at least 2 m high leading to a small semicircular draw hole in the rear wall, through which the burned lime could be extracted from the shaft. The rear wall of the vault, above the draw hole is corbelled outward to accommodate the widening diameter of the shaft behind it. The corbelled brick courses are strengthened by three horizontal iron tie-beams. Socket holes for wooden beams can be seen in the inside faces of both retaining walls, which also bear traces of the line of a sloping roof over the area between the retaining walls. Today the remains of the six kilns at Walkerville are still discernable, but in different states of intactness. None of the kilns retain any structural remains of the front bagging areas. Parts of kiln 5 were reconstructed in 1992. A retaining wall protects the area in front of the kiln and the working area has been resurfaced with concrete. The major part of the external structure of kiln 6 has collapsed, revealing the brick internal lining of the shaft. Bricks were brought in by ship although some doubt exists as to their origin. The absence of suitable clay deposits nearby would tend to rule out local manufacture. But some bricks have been salvaged from the kilns with the markings W. B. embossed on them, possibly denoting that they were made at a small kiln at Waratah Bay. A blacksmiths forge, stables for the horses and storage sheds for the lime were situated adjacent to the kilns.

Jetty: A jetty made of timber hauled in by bullock dray from the Ten Mile area was constructed at Waratah Bay for the lime industry. The jetty was about 400 yards long and to avoid the reef the jetty was constructed with several curves. The jetty was fitted with iron rails and lever operated points and horse drawn flat tray trucks were used for hauling goods to and from ships. All that is left of the jetty is one pylon, standing on the beach. The length of the jetty allowed the large ships to moor for loading.

Tramway: To facilitate the cartage of lime to the kilns a track was cut along the face of the cliff and tram tracks laid on sleepers were installed. The tramway embankment running between the quarry and the kilns is still visible although there is little physical evidence of the tramlines, other than a length of single track protruding from the cliff between the kilns and the quarry. Melba and Mac, the old draught horses, pulled the flat topped trolleys of bagged lime along the tramway lines to the ships sides. A narrow gauge tram line was laid from the head of the kilns to the bluff, a distance of approximately 500m. This was used for hauling the limestone and an extension of this line for upwards of a mile was used for obtaining firewood for the kilns.

Quarry: The limestone came from cliffs immediately around Walkerville. The main quarry lies immediately north of the kilns at Walkerville. As well as the export of quick lime a large quantity of lime stone was shipped to Sydney and to Lakes Entrance. Quick lime is produced from burning of limestone. It is the main ingredient in several building materials including mortar, lime cement, whitewash and plaster. The geological surveyor's report (Striling, 1894) mentions that from 1878 to 1894, the lime output was 1,000774 bags obtained from two acres of quarry. Further he states, "There is practically an unlimited supply yet available at Bell Point and Point Grinder. The Kilns are well built and every facility has been made for direct shipment. The lime from Walkerville was used to build Flinders Street Station.

Township : The town consisted of numerous workers cottages, school, Post Office, general store, Coffee Palace, Hall (Noah's Ark), Life Saving Rocket House, Black Smith Workshop, stables and various sheds. Most of these buildings were located at the base of the cliff above the high water mark. Evidence of houses can still be seen at the top of the cliff to the north-west of the kilns, and on the slopes to the south-west. The remains of a fireplace have been included in the retaining wall constructed for the car park area. This is reported to be the kitchen chimney of James Dewar, who was manager of the kiln works in the 1880s. Remains of workers' cottages can be seen at the top of the cliff north-west of the kilns, and on the slopes south west of the kilns. A modern road behind the kilns is built on the site of the old track which originally led to the tops of the shaft of each kiln.

Cemetery: A small cemetery was established on a hillside north of the township overlooking Bluff Creek. It contains the graves of local lime burning identities and their families, including the headstone of James Dewar. Of the approximately 30 graves that are represented in the cemetery, all facing east, only about six are marked. The headstones that are recognisable indicate the names of the early residents. The last burial occurred in 1926.

Wrecks: Several of the ships that called for the quick lime were wrecked in storms in and around the bay before a lighthouse were established on a rocky headland above bird rock.

How is it significant?
The Walkerville Lime Kilns are of historical, scientific (technological) and archaeological significance to the State of Victoria.

Scientific - The Walkerville lime kilns are scientifically (technically) important as a rare and early example of the lime burning industry where the technique and processes of lime burning can still be interpreted through the remnant buildings, structures and remnant in situ remains.