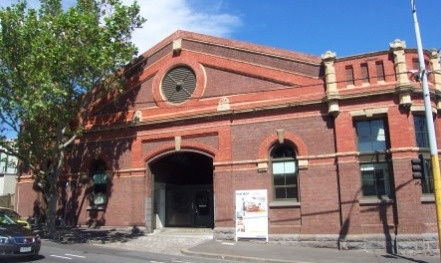 The North Melbourne Engine House building, possibly designed by the distinguished architect Alexander Davidson, is of national architectural, historical and technological significance as the most complete and original example of an engine house of Melbourne's former cable tram system, which was the most extensive cable tram system in the world operated by a single authority.
The east elevation is composed around a great entry door and single gable with large circular vent centred in the pediment and the whole stands on a bluestone base which provides a level base accommodating the sloping site. The north elevation is also symmetrically arranged around a prominent parapet and gabled central feature. These two major facades are linked by a successful corner treatment consisting of a recessed quadrant which contains the two-storey section of the building along the north elevation (Queensberry Street).
The Italianate style of the building is also distinguished by the bichrome brickwork with sandstone dressings and pinnacles on the skyline making an extraordinarily sophisticated exterior to a simple interior. The wholeis dominated by a high red brick chimney whichis ornamented at the head. The base and stump of the chimney remain as a powerful reminder of the original feature.
Classified: 23/09/1976
Upgraded: 18/11/1992