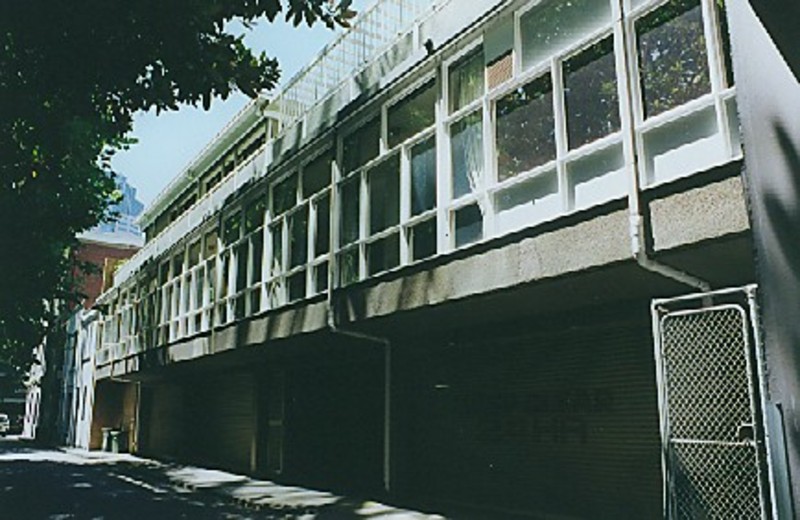 The Lyceum Club, built between 1957-59, is of State significance for its historical, social and architectural values.
Historically, the Lyceum Club is important as a possibly unique example of a purpose-built building, created by and for women. Importantly, the 1957 building commission and all subsequent alterations and additions, have involved local women architects from the original design and construction by Ellison Harvie, to subsequent work by Hilary Lewis, Jessie Madsen, Berenice Harris, and Cunningham & Keddie. Other notable local women professionals who have contributed to the building include artists Anne Montgomery (mural painting) and Bee Taplin (textiles), interior decorator Joyce Godfrey (club rooms and lounge), and landscape designer Millie Gibson. This tradition of continuous and almost exclusively female design input on the one project, over a sustained period, has few precedents.
The building was designed by Ellison Harvie who was a member of the Club, a partner in the firm of Stephenson & Turner, and amongst the most notable pioneer woman architects in Victoria. She was the first pupil articled to Arthur Stephenson in 1921, the first woman to gain a Diploma of Architectural Design from the Architectural Atelier in 1938 and the first Australian woman to be nominated as a Fellow of the RIBA in 1949. Her work within the firm of Stephenson & Turner contributed to the design of numerous major hospitals in Sydney and Melbourne, including the Royal Melbourne Hospital in 1942 which confirmed her position as one of the most notable Melbourne woman architects of the time. The Lyceum Club is one of only two commissions she accepted outside the Stephenson & Turner office.
Socially, the Lyceum Club is significant as the largest and most important club for professional women in Victoria. It was formally established in Melbourne in 1912 to provide a place of retreat, meeting, and discussion for professional (and retired) women, accommodation to members visiting the city, as well as to pioneer a status for women within a professional sphere dominated by men. The Club's first president was Pattie Deakin, wife of the prime minister Alfred Deakin, and many of its early members were among the first female professionals in their particular fields: Dr Constance Ellis (medicine), Christian Jollie Smith (law), and Marion Mahoney Griffin (architecture). As a result of bequests and member donations, the Lyceum Club houses an important collection of furniture, artwork and reference books.
Architecturally, the building is typical of a late 1950s internationalist aesthetic which figures the first floor as a rectangular box cantilevered over its supporting base. At the time, this was an unusual typology for a city club building. The building is also a relatively intact example of 1950s domestic architecture in its scale, material selection, planning, and detailing. Since 1959, the building has undergone numerous alterations, the most notable being the addition of a seminar room to the second-storey in 1981 which compromises the clarity of the original composition. Internally however, the building retains many original finishes and fittings, for example limed timber paneling, monogrammed door knobs, spun aluminum light fittings and acoustic tiling.
Classified: 13/12/1999