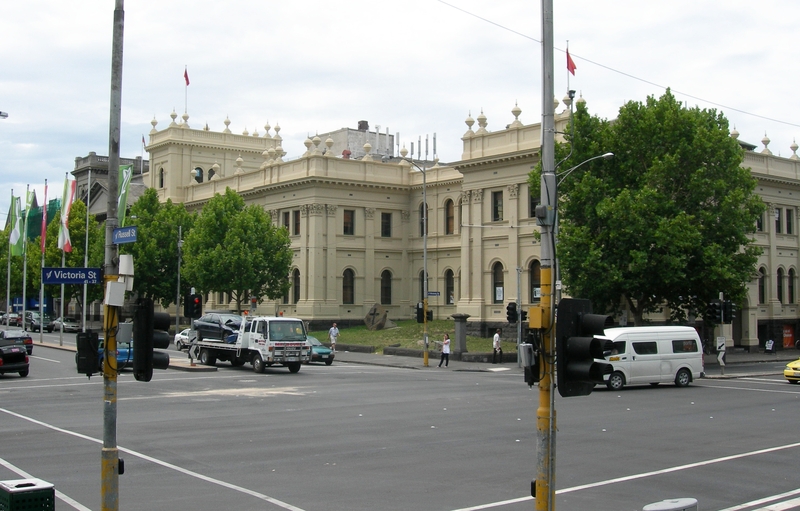 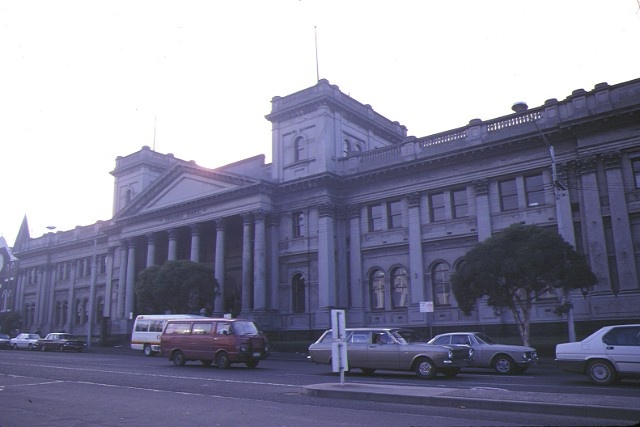 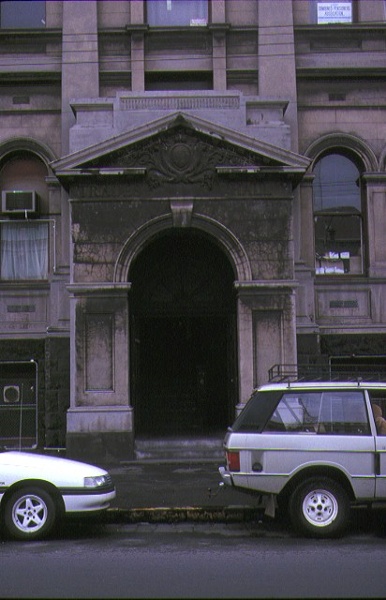 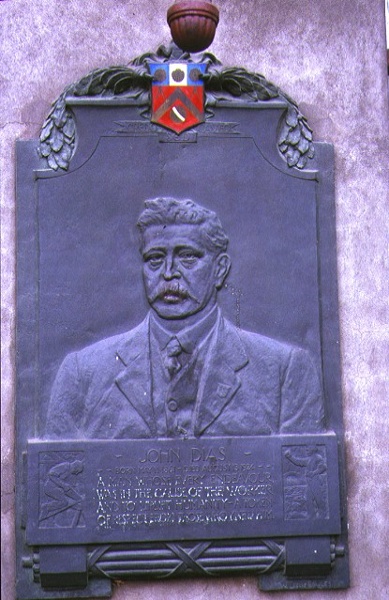 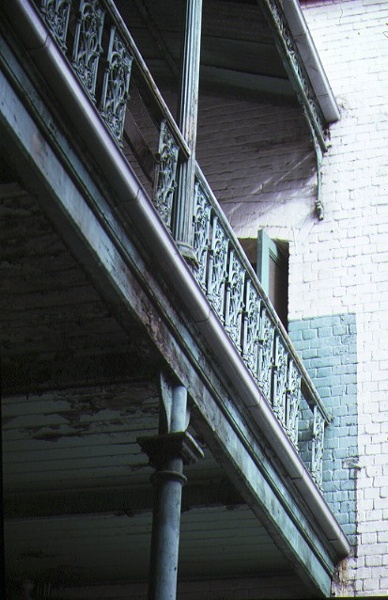 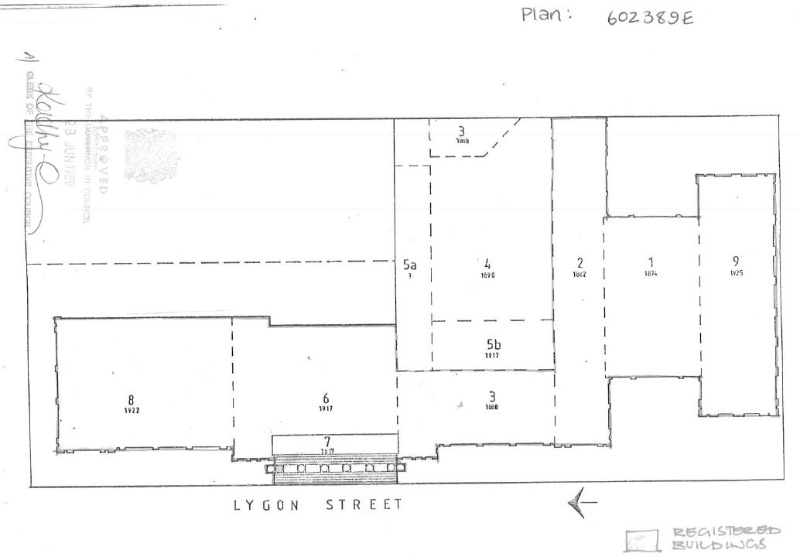 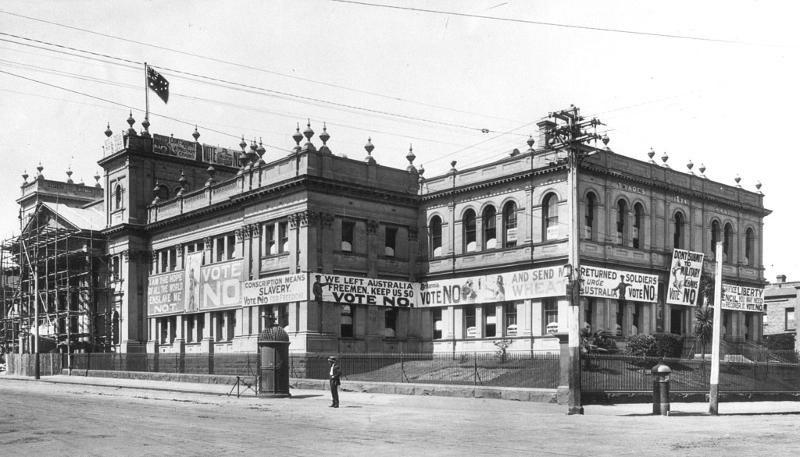 Trades Hall was constructed in some ten stages, the most significant period of building being that between 1874 and 1925. It was during this period that the imposing classical facade to Lygon and Victoria Streets was established. Trades Hall is largely a two storey building, with bluestone foundations and brick walls with unpainted cement render finish. The facade is articulated primarily by the use of Corinthian pilasters. An entrance portico in Lygon Street features eight Corinthian columns supporting a triangular pediment between two flanking towers. The Victoria Street wing features large parapet urns. This early phase of construction was built to the design of architectural firm Reed and Barnes and its later derivatives. Later additions, such as the 1960s office building to the rear, are not sympathetic to the original style.

Trades Hall is of historical, social and architectural significance to the State of Victoria.

Trades Hall is of historical significance for its associations with trade union, Labor Party, and State and Australian history. The existing building occupies the site where the first, temporary Trades Hall was opened in May 1859. Since its construction, the building has been the site of numerous important events in union and working class history. Its origins lie in the successful eight hours day movement, in which Victorian artisans led the world, and has long been regarded as a splendid monument to this achievement. In addition, the building has significant associations with the development of Victoria's trade unions, numerous unions having had their headquarters in the building, and with the early history of the Australian Council of Trade Unions, hosting the first meeting of the ACTU in May 1927. As Australia?s oldest and largest Trades Hall, it stands as a symbol of the importance of organised labour within Australian society. Its relatively intact interior and exterior provide an evocative testament to the living traditions of the Australian Labor movement. In particular, flags, banners and honour boards (including one commemorating the leaders of the eight hours movement) are significant artefacts tracing more than a century of union history, and are important historical records in their own right. Trades Hall?s role in Australia's political history is also significant. In particular, activities leading to the birth of the Labor Party and support of the great industrial campaigns of the 1890s took place here. The direct connection with the ALP was maintained for almost 100 years, the Victorian headquarters of the Party being based in Trades Hall until 1972. Trades Hall also provided facilities to support the Berry Liberal faction of protectionist politicians in the 1870s. This was a tumultuous time in Victorian politics, with Berry and his supporters trying to push through upper house reform introduce payments for MPs and implement high tariffs and land taxes, all policies which resonated within the walls of Trades Hall.

Trades Hall is of social significance as a centre of radical and working class politics and activism in Victoria for over 100 years. Major campaigns and struggles that have had important ramifications for Victorian and Australian society have been coordinated from Trades Hall, and the building continues to serve as a focus of union organisation and left-wing political activity.

Trades Hall is of architectural significance as a fine surviving example of a large 19th century institutional building, and for its associations with Joseph Reed. It was designed as a combined Trades Hall and literary institute by the firm of Reed and Barnes and its later derivatives. Its conservative style reflects the aspirations towards social respectability of the early Trades Hall leadership. It is a rare example of a building constructed in stages over a long period from 1873-1926, which remains consistent with its original 1870s style. It is an outstanding example of 19th century craftsmanship, with architectural records showing that its builders prided themselves on using the best of local materials and building skills. This pride reflected the major role played by Victoria's building unions in securing the site and the finance, and in planning and carrying out the construction of the Trades Hall building. The complex is an important Melbourne landmark and a dominating and significant feature in the Lygon Street streetscape. The building's architects, Reed and Barnes, were very influential establishment architects who designed many of Victoria's most notable public buildings. Joseph Reed (1823-1890), who founded the Reed and Barnes practice, was one of the most important architects in the history of Melbourne. Over a long working life he was a major figure during one of Melbourne's most vigorous periods of growth- the 1870s and 1880s. He won numerous competitions and was responsible for a large number of important public and private buildings in various styles, including the Public Library in Swanston Street, most of the University of Melbourne's 19th century buildings, Rippon Lea, Melbourne Town Hall and the Exhibition Building. His was the first major private architectural practice in Melbourne, and its successors have continued to contribute to Melbourne's architectural richness ever since.