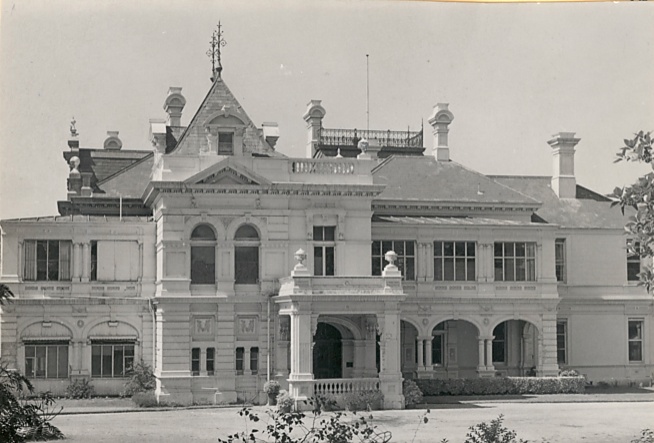 Stonington at Toorak is a spacious two storey brick and stucco mansion erected in 1890 for Cobb & Co Coach proprietor and businessman, John Wagner, to a boom style classicism design by noted Melbourne architect Charles D' Ebro. For 30 years (1901-31) the lavishly decorated mansion was used as the Government House in Victoria and later as a Girl's School, hospital and teachers college.
Stonington is of architectural importance as an outstanding work of C A D'Ebro and an excellent example of late boom style classicism in Melbourne. The mansion and site, including the gatehouse, fences and once magnificent garden is of historical significance being used as the residence of the Victorian Governor for thirty years after federation. The finely detailed and crafted interiors are notable, and especially the great hall, staircase and glazed lantern.
Stonington has been adapted to a variety of uses, the essential boom style effect is preserved. The mansion interiors, although considerable reduced from the original state are recognisably intact. The exterior loggias have unfortunately been enclosed.
Classified: 30/10/1958

Garden Statement of Significance: Stonington, the residence erected in 1890 and the present garden laid out at that time, the site used as State Government House 1901-31, and since then used for a variety of institutional purposes, retains a residence of National significance. It is an architecturally important and outstanding work of architect Charles D'Ebro and an excellent example of the late 'Boom Style' classicism in Melbourne. The finely detailed and crafted interiors are notable, especially the great hall, staircase and glazed lantern.
The garden is of State significance:
- as a typical nineteenth century city mansion garden; although now diminished in size and the south and east portions covered with new buildings, sufficient garden survives to appreciate its nineteenth century characteristics;
- as the setting for a residence of outstanding architectural and historical significance;
- as a typical nineteenth century picturesque garden; attributes include the carriage drive, winding gravel paths, decorative outbuildings, mature trees, garden beds and large shrubberies;
- for its retention of buildings and structures typical of nineteenth century city mansion gardens; these include the front fence, gate lodge (of outstanding architectural importance), stables, gravel paths, terrace wall, balustrade, urns and steps;
- historically, for its connections with John Wagner and the land boom period of the late nineteenth century as well as its long period of use as the State Government House.
Classified: 'State' 12/02/1992