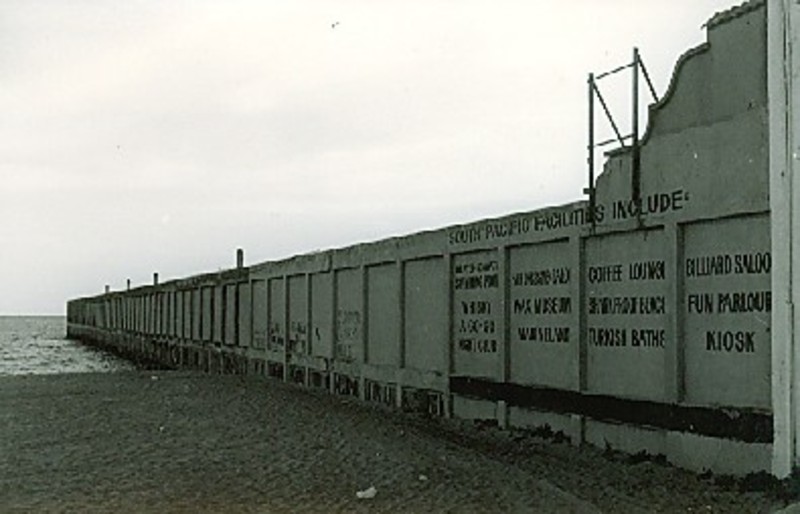 The structure known as the Seabaths, on the St Kilda foreshore, is significant at a local level as a remnant of one of the largest, and most complex and most exotically styled sea-bathing facilities constructed in Victoria.
Designed by the St Kilda City Surveyor, Richard Terence Kelly and opened in 1931, the baths were unique for providing protected sea-bathing for both men and women in separate enclosures, as well as hot sea-baths, a gymnasium, an open air cafe, a number of kiosks and a large cafe/night-club as an integral part of the development.
The architectural rendering was also unique for such structures, but appropriate for Melbourne's premier beach resort, already characterised by the exotic styles of such structures as Luna Park and the Palais Theatre. Designed in a generally Spanish Mission mode, the building included open arcades and loggia, Moorish influenced traceried archways, Spanish Baroque pediments, and was dominated by a pair of domed towers.
Much of the structure has been altered or destroyed, and only the hot sea-baths, the pair of towers, and some arcading in the external walls survives. Nevertheless, what remains is a monument that is evocative of almost everything that is important about St Kilda. It is a place that combines entertainment with notions of decency, and later, prostitution and violence, within a structure evocative of the orient and of the sea-side.
Classified: 11/04/1995
File Note: Demolished May, 1995. Rebuilt 1996.