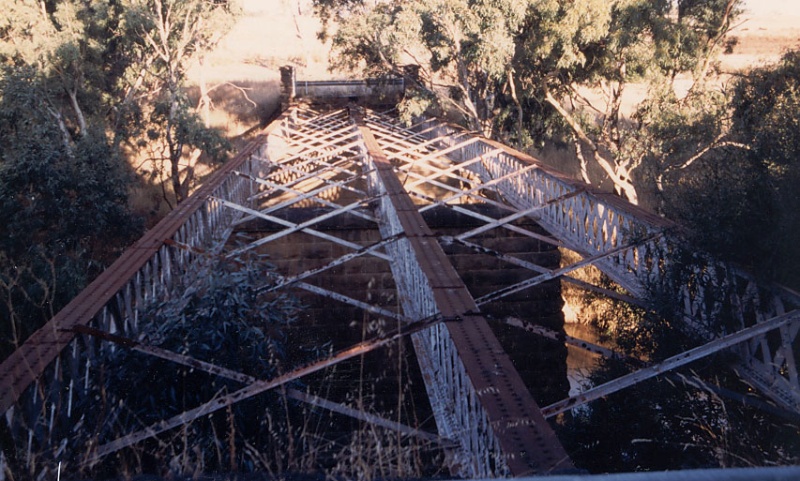 The second Glenmona Bridge built in 1871, is a very early locally designed and produced continuous wrought-iron lattice-girder deck-truss road bridge on bluestone-masonry abutments and piers (originally with a twin-layer diagonally-timbered deck and timber side rails, but the timber element of the superstructure has been destroyed by fire. It is historically and scientifically significant at State level.
It has an important place in our bridge history. The Bung Bong site was an historic crossing place between the Ballarat-Maryborough and Avoca districts from the earliest days of white settlement, and became of even greater importance during the hectic alluvial goldrushes of the 1850s when its first timber bridge formed part of the main route between South Australia and the Mount Alexander diggings. The second Glenmona Bridge would be the prototype for a new series of locally constructed wrought-iron lattice-girder deck-truss main road bridges with masonry substructures and timber tops, created under the direction of a government bridge inspector specifically to handle the sort of freak floods experienced across Victoria in the winter and spring of 1870.
The wrought-iron design displaced a more conventional laminated-timber arch design that the municipalities initially approved for the site. Similar wrought-iron lattice-truss designs would be used elsewhere to replace earlier laminated-timber arch bridges in wide-channel situations, as for example with the new Government Bridge at Clunes in the 1890s. Glenmona Bridge is therefore historically very important as the prototype for a general road-bridge pattern that would evolve as it became widely used in central Victoria and the Western District during the colonial era, with isolated examples being constructed as late as World War 1.
The Glenmona Bridge was constructed earlier than any other rural Victorian wrought-iron lattice-girder deck-truss bridge, being the first of this deck-truss type built with benefit of hindsight into the devastating potential of freak floodwaters unleashed across the State in 1870. In scientific and technological terms, this bridge artifact contains examples of the earliest form of locally-produced wrought-iron lattice-girder produced for road-bridge use, manufactured at a Ballarat iron works rather than imported from Britain. Glenmona Bridge is an important relic from which we can learn about aspects of Ballarat iron-working technology circa 1870. By way of contrast, we can compare these sophisticated and attractive locally produced wrought-iron lattice trusses with the more mundane iron plate girders of the Hotspur Bridge of 1870, or the rugged but less aesthetically pleasing above-deck wrought-iron box girders of the 1868 Keilor Bridge. The Glenmona Bridge represents the next stage in Victorian iron bridge evolution and remains an impressive sight and an enduring symbol of a long-departed colonial era to catch the eye of passing motorists.
Classified: 05/06/2000