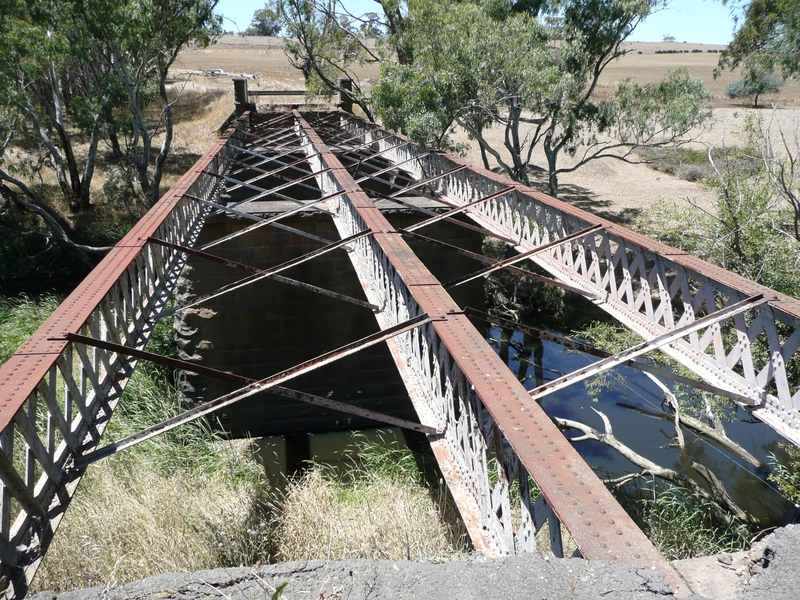 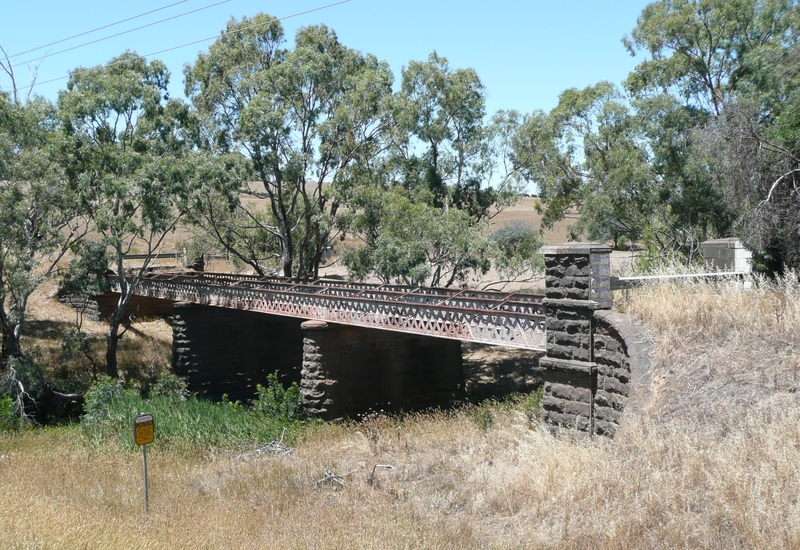 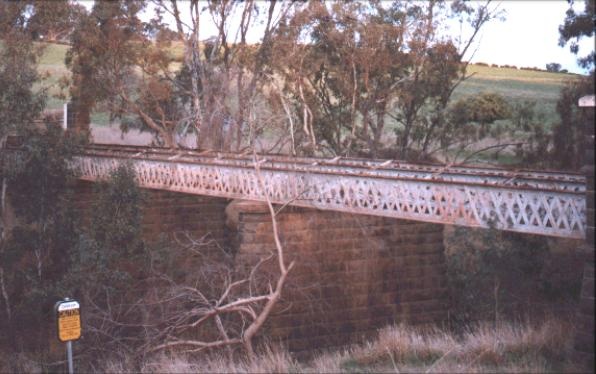 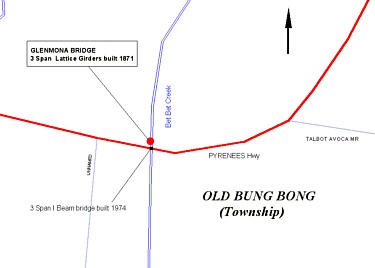 What is significant?
The old Glenmona Bridge is situated beside the modern bridge at the Bet Bet Creek crossing of the Pyrenees Highway at the site of the old Bung Bong township. It is a continuous wrought-iron lattice-girder deck-truss road bridge over three spans on bluestone-masonry abutments and piers. This crossing had been situated on a main northward communication link since pastoral days, and, during the gold rush, the main link between South Australia (Adelaide) and Mt Alexander. It remained a major trunk road until the years after World War One, when the Country Roads Board constructed the Calder Highway to north and north-western Victoria. The bridge was built in 1871 to replace a notable 1857 timber bridge which had been swept away in the freak state-wide floods of 1870. The piers are 10.1 metres high, and the truss 46.6 metres long. The deck, originally of two diagonal layers of 8 inch by 3 inch planks resting on three continuous wrought-iron lattice trusses, has been destroyed by fire. The tall bluestone abutments and piers are still in very good condition, and the wrought-iron lattice-girder trusses are intact, though now fully exposed to the weather. Its massive abutments, tall bluestone piers, and the wrought-iron lattice trusses provide an impressive sight to passing motorists.

The Glenmona Bridge is of scientific (technical), historical, and aesthetic significance to Victoria.

It is of historical significance as an historic crossing place on a major early pastoral and mail route which linked central Victoria with north-central and west Victoria; in the hectic alluvial goldrushes of the early 1850s it was of even greater importance as the main route between South Australia and the Mount Alexander diggings.

It is of scientific (technical) significance as the prototype for a new series of locally constructed wrought-iron lattice-girder deck-truss main road bridges with masonry substructures and timber tops, created under the direction of a government bridge inspector specifically to handle the sort of freak floods experienced across Victoria in the winter and spring of 1870. It represents the next stage in Victorian iron bridge evolution, displacing the laminated-timber arch design that municipalities had often used in wide-channel situations, but which had fared badly in the 1870 floods. Its sophisticated locally produced wrought-iron lattice trusses also contrast with the more mundane iron plate girder and box girder designs for “permanent” bridges at a few rural crossings since the late 1860s. The design of the lattice-girder deck-truss bridge evolved as it became widely used in central Victoria and the Western District during the colonial era, with isolated examples being constructed as late as World War One. Its handsome iron trusses also reflect the evolving sophistication of colonial technology. Manufactured at a Ballarat iron works rather than imported from Britain, they are significant artifacts in the history of manufacturing in Victoria, with potential to provide technical information about Ballarat engineering circa 1870. Whereas the huge lattice truss girders of the Redesdale bridge (1868) had been imported from England in 1859, the colonial engineering works which had in the meantime developed to service reef and deep lead mining were quite capable of supplying such products by 1870.

It is of aesthetic significance for its substantial masonry piers and abutments, and its handsome trusses, which are an impressive sight from the nearby Pyrenees Highway.