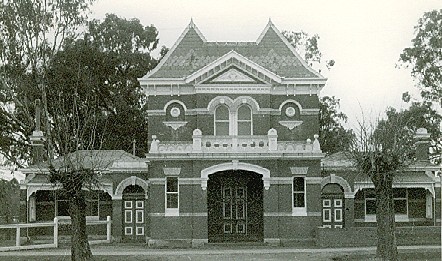 Individual Statement of Significance: A typical brick courthouse of 1864 extended in 1869 but completely altered in character by substantial extensions and alterations in 1888/9. The result is an imposing assembly of decorated elements culminating in steeply pitched patterned slate roofs in hipped, gabled and pinnacled forms. Rendered mouldings are richly formed and perforated and the entry porch is equipped with elaborate iron gates.
Classified: 'Regional'14/11/1968
Revised: 03/08/1998

Group Statement of Significance: The former Courthouse (1864-1889) former Survey Office (1861), Holy Trinity Church (1865-1905), Church Hall (1901) and Vicarage (1914) constitute an harmonious group based upon their use of a common warm red brick as the principal material for a succession of buildings constructed and altered over some 50 years (1861-1914). The former Courthouse and Survey Office are now used for parish purposes and so are under common control and maintenance with the church buildings. See File Numbers 2003 & 2201.