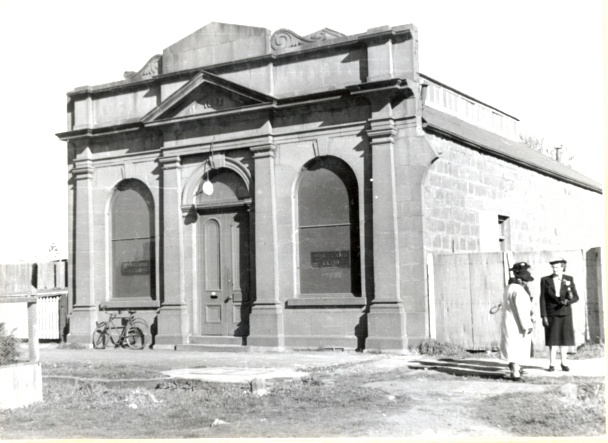 The Portland Club was erected in 1860 as the auction rooms and wool warehouse of G G Crouch, a Portland merchant who established business in 1842. The simple rectangular plan stone building with roof monitor light and conservative classical facade of fine axed basalt originally included a stone arch well over the north side driveway and loading bays. The architect is unknown. The Portland Club acquired the building in 1919.
The facade of the Portland Club is an exemplar of the mason's craft in basalt. The intractable nature of this stone generally precluded the execution of detailed classical mouldings; however, the extremely fine grain black basalt of the Portland region has facilitated the construction of a definable group of finely modelled basalt buildings, which included Burswood, Maretimo, the Court House and the Portland Club. This building has important historical associations with Portland in the era when Western District wool was exported from the port, and later as the meeting rooms of the Portland Club.
The Portland Club is well maintained and has suffered little external alteration since removal of the stone arch wall over the north driveway.
Classified: 12/05/1958
Revised: 03/08/1998