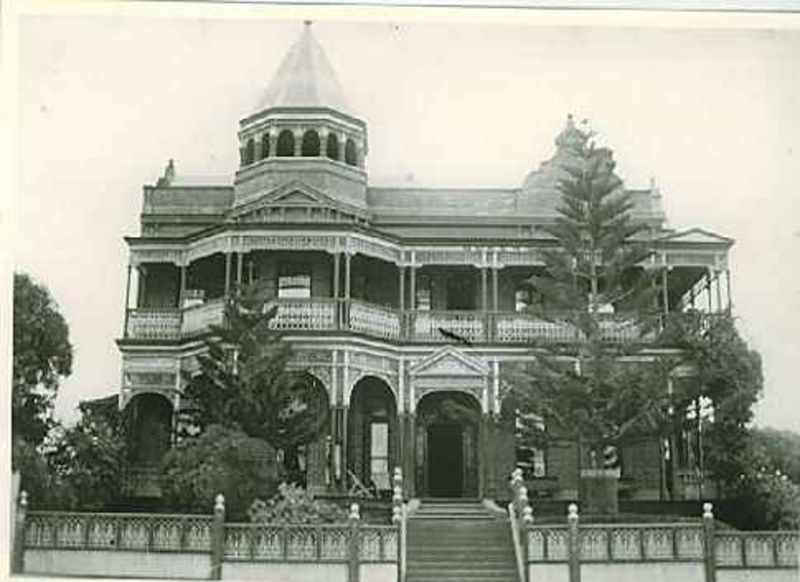 A resort hotel built in 1887-8 for Martha Nugent & Joseph Goslin to a design of Reed Henderson and Smart, in which appears the influence of the English Queen Anne and Aesthetic movements.
A projecting polygonal bay in the facade rises into an octagonal belvedere surrounded by an arcade on squat turned shafts (all now glazed in) and with an octagonal cone roof, while at the opposite end of the facade, as well as in the side elevations, are dutch gables formed of convex and concave quadrants, and with pedimental caps. The body of the building is brick, and the facade is wrapped around with a verandah and balcony, carrying interesting decorative cast iron, especially the lower frieze which is of an uniformly thick fretwork character and incorporates panels of wavy bars in the Aesthetic manner. A small pediment is incorporated in the verandah opposite the entrance door, and another, now removed, formerly rose from the balcony roof to help balance the belvedere at the other end of the facade. Some interior decoration remains, especially in the hall, where there is a tessellated tile floor and timber panelled ceiling, and the arcaded screen incorporates glazing with marine themes, some of which is original and some reproduction.
Classified: 12/11/1981