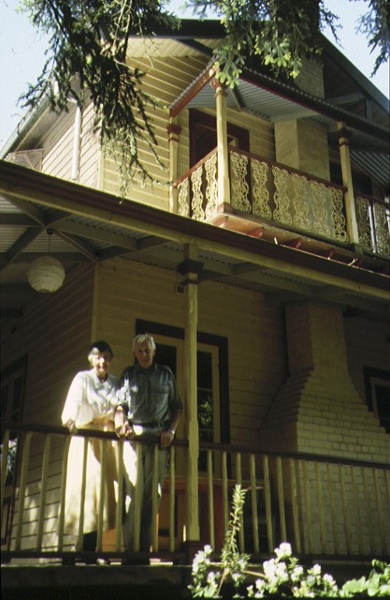 What is significant?
The Hermitage, Narbethong, is a complex of buildings which was erected in 1894 as a residence, studio and guest house on a thirty-two hectare site on the summit of Black Spur, for internationally renowned anthropological and social photographer, John William Lindt. Born in Germany, Lindt ran away to sea and arrived in Melbourne in 1862. From here he travelled and settled in Grafton, where he remained until 1876, first working for a photographer, before taking over this business, and then opening his own photographic studio.

Lindt subsequently moved to Melbourne, which was a rich and rapidly developing city on his arrival in 1876, and opened a photographic studio in Collins Street, Melbourne. He immediately gained recognition amongst the prosperous members of society and gained a reputation for society, landscape and cityscape photography. He was an official photographer for an expedition of Sir Peter Scratchley to New Guinea in 1885 and for the Melbourne International Exhibition in 1888, and won medals internationally for his work. Lindt travelled extensively abroad and locally, and familiarised himself intimately with such picturesque areas of Victoria as the mountainous forests between Healesville and Marysville. Closing his studio in 1894 after losing his clientele in the financial crisis, it was to this area that Lindt moved and developed his estate, the Hermitage, where he remained until his death in 1926 at the age of 81 years.

Narbethong, situated between Healesville and Marysville, on the route from Melbourne to the Gippsland goldfields, was laid out in 1865 and became a changing point for coaches to the goldfields. In the 1880s timber harvesting began in the area and tourism became popular, with such towns as Healesville and Marysville attracting visitors, particularly after the railway had been constructed to Lilydale in 1881. By the early twentieth century, the trip along the Black Spur was popular, and often included visits to the Hermitage property.

The Hermitage began as a picturesque complex of six separate timber buildings, set in landscaped gardens on a steeply sloping site of Mountain Ash forest. For about fifteen years, from 1894, Lindt improved the property and the establishment grew to accommodate about thirty guests. The buildings included the main house, studio, smokers? cottage and guest house. The studio contained an entire glazed side and a stage at one end, from where Lindt showed lantern slides and lectured to his guests. The garden included three tree houses with ladder access, a raised board walk, entry lych gate, rotunda, fountain, large lake fringed with tree ferns, and tracks were constructed leading to glades and waterfalls in the surrounding forest. Many photographs of the property were taken over Lindt's period of occupancy, and these form an excellent record of the buildings and garden, particularly in the early twentieth century. A number of these were taken from the tree houses on the property.

The garden has been accredited to Ferdinand von Mueller, a friend of Lindt's and a visitor to the Hermitage. It incorporates an avenue of silver birches, and fine tree species, such as Coast Redwood, Sierra Redwood, Himalayan Cedar, Japanese Cedar, Linden, Chestnut, Italian Cypress, Lawson's Cypress and many Rhododendrons and cool climate shrubs.

In the early 1930s, Joan Anderson purchased The Hermitage from Lindt's widow, Catherine, and it continued as a guest house until the 1950s when a change of ownership saw its use alter for the first time, to a weekend holiday house. During this period the condition of the property deteriorated significantly. In 1979 it was sold and progressive restoration of the property was undertaken. It was reopened as a guest house in 1988. The lych gate underwent extensive, and careful, restoration in 1995, with the use of photographs to establish details of the bush timber post structure, the iron covered shingle roof, paling dado, seat, picket gates and decorative lattice work. Since the establishment of The Hermitage, this lych gate was the public focus of the property, and provided many tourists with the only glimpse of this well known retreat. Other buildings have also undergone restoration.

How is it significant?
The Hermitage, Narbethong is of historical, architectural, aesthetic and scientific (horticultural) significance to the State of Victoria.

Why is it significant?
The Hermitage, Narbethong is of historical significance due to its association with the renowned photographer, J. W. Lindt and as a highly unusual example of a private mountain retreat. Lindt took numerous photographs of the area and encouraged local tourism to his own property and to the surrounding region. Together with Nicholas Caire, he produced a Companion Guide to Healesville in 1904. The Hermitage was a landmark, particularly in the early twentieth century, and was visited by a number of well known people, such as Dame Nellie Melba and Ferdinand von Mueller.

The Hermitage, Narbethong is of architectural significance as a romantic assemblage of highly distinctive and unusual timber buildings. The influence of Lindt's photographic expeditions to Oceania and New Guinea was reflected in the tree houses (since demolished) and some of the surviving building fabric. It is of significance for its extensive use of local timbers, one of the important industries in the vicinity.

The Hermitage, Narbethong is of aesthetic significance as a picturesque complex set within the remains of a late nineteenth century landscaped garden, possibly designed by Ferdinand von Mueller. It has a number of exotic species that have been retained.