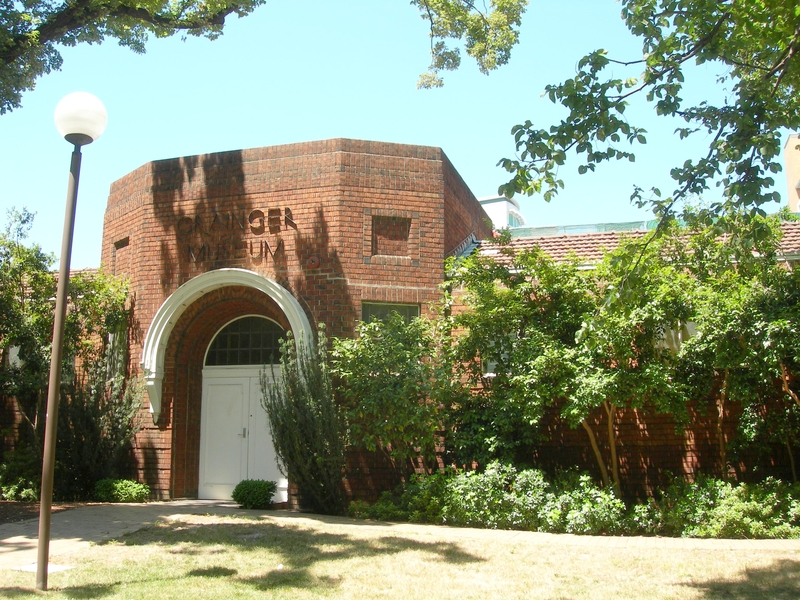 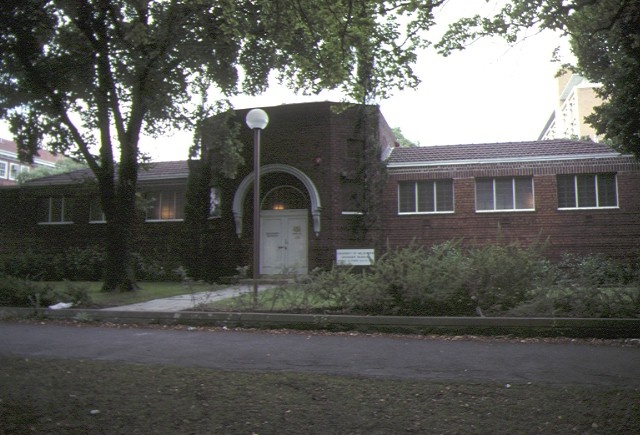 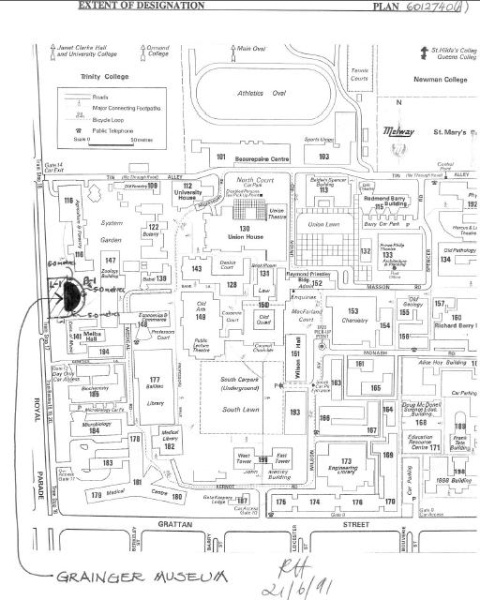 What is significant?
The Grainger Museum was built 1935 and extended in 1938 to the designs of architect John S Gawler of Gawler and Drummond. Hansen and Yuncken were the builders of both sections. The building’s patron and source of funds was Percy Grainger, an internationally acclaimed musician and composer. The strongly nationalistic Grainger described the Museum as a bequest to Melbourne, the place of his birth. It was conceived by Grainger as both a place of musical research and learning as well as a monument to his own life and work. The original 1935 building is a single storey brick pavilion with central entrance doorway, glass block clerestory windows and a hipped roof covered with terra cotta tiles. The bricks were specially textured ‘Evans’ colour blend bricks. Early plans conceived of future wings branching off from the central pavilion in the manner of a panoptican. The 1938 extensions included the additional single storey wings but enclosed them with a semi-circular gallery, which left a segmental courtyard space within. The wings and gallery have a flat concrete roof and concrete floors. Two segmental areas formed by the wings and gallery are strong rooms with fireproof steel doors. The overall styling is a variation of the neoclassical approach, and Grainger had a large input into the final form. The building houses musical artefacts and a huge collection of documents associated with Grainger’s life.

How is it significant?
The Grainger Museum is of historical and architectural significance to the State of Victoria.

Why is it significant?
The Grainger Museum is historically significant for its associations with its founder Percy Grainger. Australian-born Grainger was an internationally acclaimed musician and composer, and an early contributor to the development of electronic music and experimental free music.

The Grainger Museum is rare as an example of a purpose built autobiographical museum dedicated to the life and works of one person.

The Grainger Museum is historically significant for its large collection of artefacts and documents which provide a contextual understanding to Grainger’s life and work. The artefacts encompass many of his passions, including ethnography, ‘Free-Music’ composition and electronic music.

The Grainger Museum is architecturally significant as an intact 1930s building exemplifying an eclectic approach drawing on a range of contemporary stylistic and theoretical approaches. The severity of the architectural styling harks both to the nineteenth century neoclassicism of Sir John Soane’s Dulwich Art Gallery in London as well as contemporary Australian neoclassicism. The earthy textured nature of the face brickwork is contrasted to the smooth off-form concrete roofs and floors. The Grainger Museum also has a highly unusual plan form and is an early example of an Australian building with glass bricks.

The Grainger Museum is architecturally significant as a work of John Gawler, architect to the University of Melbourne. He was instrumental in the formation of the School of Architecture and was its first Dean, a position he held for twenty years.
Show more
Show less
All information on this page is maintained by Heritage Victoria. Click below for their website and contact details.