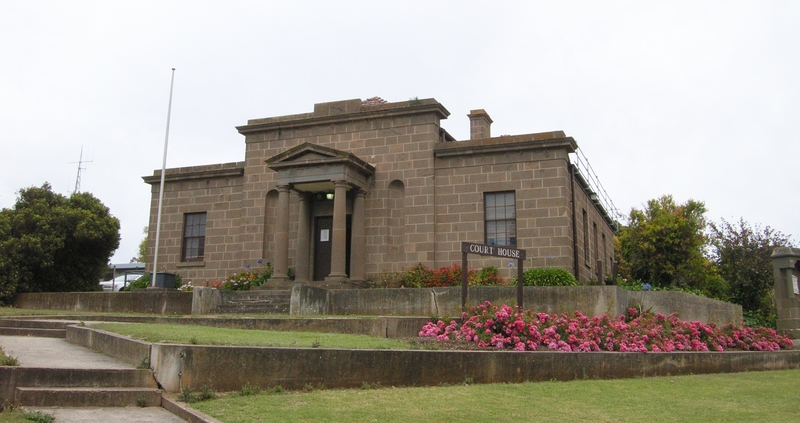 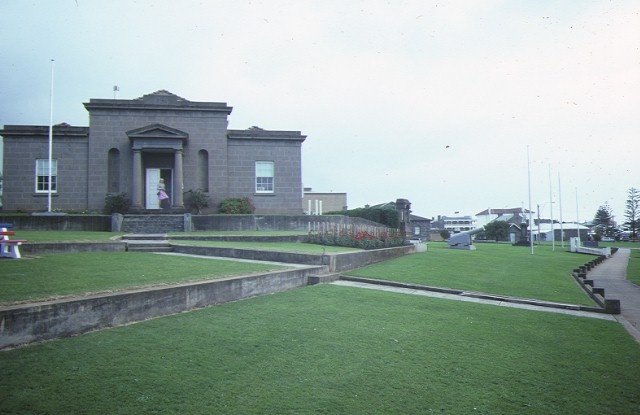 Portland Court House is a single-storey bluestone court house erected in 1843-45 to a design attributed to the Port Phillip District's clerk of works, James Rattenbury (1808-63). The building exhibits the simplicity and elegance of the Victorian Regency style, with classical elements including a symmetrical facade, prostyle portico supported by four Doric columns, a classical pediment, sash windows with multi-panelled glazing, multi-panelled doors, and smooth-textured ashlar masonry walls. Detailing in the bluestone exterior of the east elevation facade presents a restrained and unified display of skill and simplicity. Apart from the addition of a magistrate's washroom at the rear in 1953, the floor plan is generally intact. Through the main entrance on the east elevation is a large central courtroom surrounded by rooms for a magistrate, jury, clerks, a library, a cell, and sheriff's office. Light enters the courtroom from four directions. Some original furniture and fittings have been removed, but the courtroom retains much of its original joinery and is the most complete and impressive space in the building. An original slate roof has been replaced by terra cotta tiles, the porch filled, and a public toilet block has been built near the site. The building has been continuously used as a court house since its inception and is a key element of the predominantly bluestone civic and judicial precinct at Portland.

Portland Court House is of historical, architectural and cultural significance to the State of Victoria.

Portland Court House is historically significant as the earliest surviving court house in Victoria and as the oldest court house in Victoria still operating. It is a significant feature of the early government quarter in Victoria's oldest settlement, where it is associated with other buildings in a major bluestone precinct which includes the Customs House (1849), Police Watch House (1850), and former Town Hall (1860). It is a physical reminder of the arrival of permanent British justice in Victoria's earliest settlement. Portland Court House is historically important for its rarity as an extant building attributed to Port Phillip's first clerk of works (James Rattenbury). From its overall integrity and construction date of 1843-45, Portland Court House is also historically important for its direct association with Victoria's legal process over more than 150 years, and as a rare, surviving example of a Victorian Government building built before the establishment of the Public Works Department in 1856.

Portland Court House is architecturally important as the earlier of two surviving court houses in Victoria designed in the Victorian Regency style, which was popular in the 1840s and 1850s and notable for its elegance, simplicity, and sparse classical details, often involving stone construction, clear rectangular masses, classical columns, and roofs concealed by parapets. It is also significant as one of the few buildings outside NSW or Tasmania that demonstrates Victorian Regency architecture.