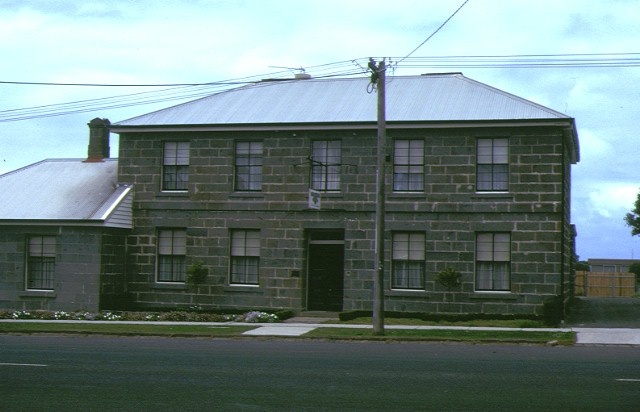 In December 1800, Lieutenant James Grant on board the Lady Nelson sighted a wide bay which he named Portland Bay after a Secretary of State, the Duke of Portland. The bay had an abundance of seals and whales and by the early 1830s, sealers and whalers had an established a whaling station and trading port on the bay. As the richness of the pastoral hinterland became apparent, other settlers, led by the pioneering Henty brothers, took up land in the area. It became apparent that the combination of fine grazing land, the substantial numbers of whales and seals and a good sheltered harbour made the location an outstanding prospect for a permanent township. On the favourable advice of Foster Fyans, the Police Magistrate for Geelong, the government commenced the set out of a new township in 1840.

The site of Victoria House was purchased at the third Crown Land sales at Portland in 1847 by James Kittson. Before 1853 Kittson had constructed three buildings on the site, consisting of a small building in the yard, a stable and a stone building. The 1853 stone building which remains on the site was a two roomed structure, one room of which appears to have been a kitchen. In 1853, Kittson sold to John Harris who retained ownership only until 1854 when he disposed of the property to Kenneth McKenzie, the former licensee of Portland's Britannia Inn. McKenzie commenced construction of a large two storey building in 1855 and by February 1856, the building was nearing completion. The Portland Guardian reported that the new Private Family Hotel would be a great acquisition to the town where 'families will now be able to obtain accommodation in town in a respectable hotel where no bar is kept.' In December 1856 Kenneth McKenzie obtained a victualler's licence and in April 1858, called tenders for additions to McKenzie's Family Hotel. It is believed that the tenders were for the addition of the single storey portion of the building on Tyers St which abuts the 1855-56 two storey building. The single storey addition was constructed to house the establishment's bar and had no internal connection to the residential section. McKenzie sold the hotel to Donald Cameron who operated the business as the Royal Hotel from 1858 until 1862 when it became Lott's Family Hotel under the ownership of Charles Lott.

The building continued to be used as a hotel until the lapse of the licence in 1864 when the property was bought by John Huxley. The Huxley family owned the building for the next 54 years. In the early years of Huxley's ownership, the building was leased to a Mrs Tuckfield, who ran a school known as Portland House Ladies Seminary until its removal to other premises in 1868. The Colonial Government leased the building from 1868-71 as a residence for Hugh Ross Barclay, the Superintendent of Police. In the late 1870s or the early 1880s, the building appears to have become a guest house. The building was given the name Victoria House by the then owner Charlotte Huxley in 1880. Where to Go guides indicate that Victoria House was operated in 1915 by E Hutchinson with room for 50 guests but by 1926 under the proprietorship of Ethel Gorman, the capacity had been reduced to 26 beds. The capacity of the guest house remained at about 25 guests during the ownership of G Hale in the 1950s and 1960s. The building was renovated in the early 1990s and has operated as a guest house or bed and breakfast in recent years.

Victoria House consists of a two storey Colonial Georgian bluestone building of 1855-56, the attached single storey former bar building of 1858, and a c1853 single storey bluestone residential building at the rear which apparently originally stood as a separate entity. Each structure has corrugated iron hipped roofs. The single storey former bar portion of the former hotel and building at the rear each has a verandah facing the central garden. The facade of the 1855-56 two storey building and the 1858 attached bar room building are symmetrical about the central entrance doors. The street elevation of the building is finely-cut coursed bluestone while the side walls consist of rough hewn coursed bluestone blocks.

Victoria House is of architectural and historical significance to the State of Victoria.

Victoria House is of architectural significance as an unusual example of a Colonial Georgian style hotel which exhibits a visible expression of the separation of its bar and residential functions. The position on the street alignment of the attached 1858 single storey bar portion and the set-back of the 1855-56 double storey residential building provides a distinct entrance to each, and reflects the early change of use of the building from a private hotel to a licensed premise. The 1855-56 two storey section is an intact and early example of private hotel [or guest house] accommodation in Victoria.

Victoria House is of historical significance for its association with the commercial development of Portland in a period when immigrant ships were being diverted to Portland and other outlying ports in attempt to deter further congestion of the already overcrowded Victorian goldfields.