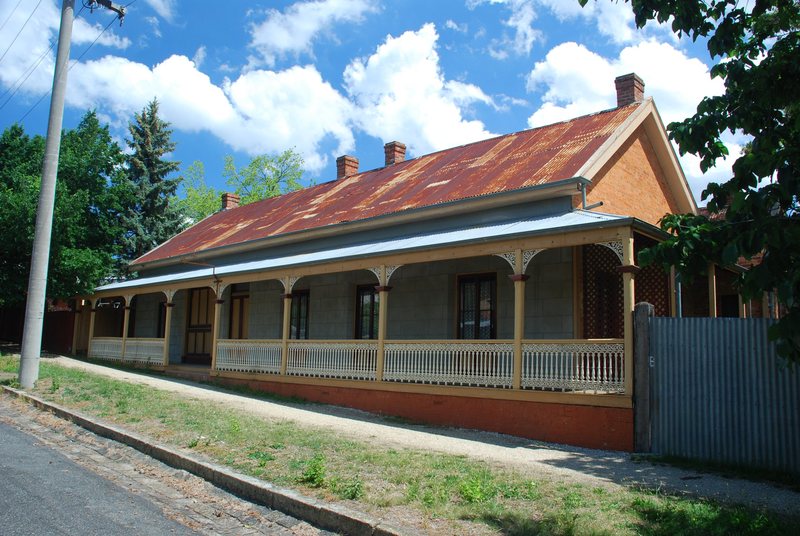 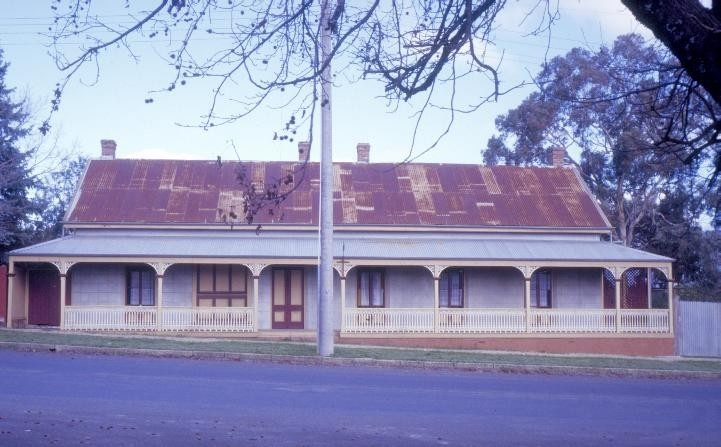 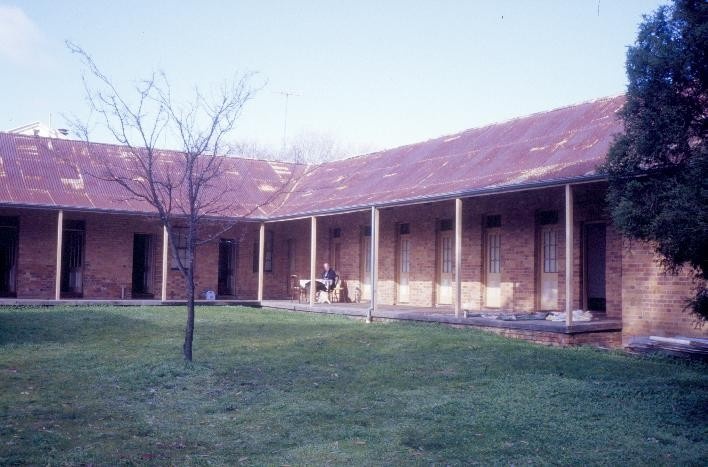 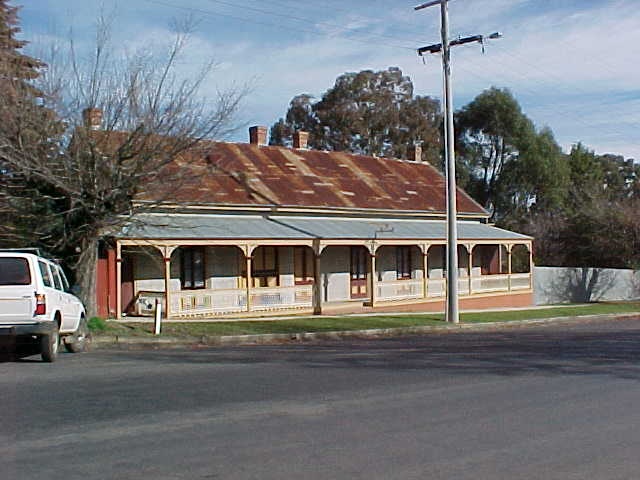 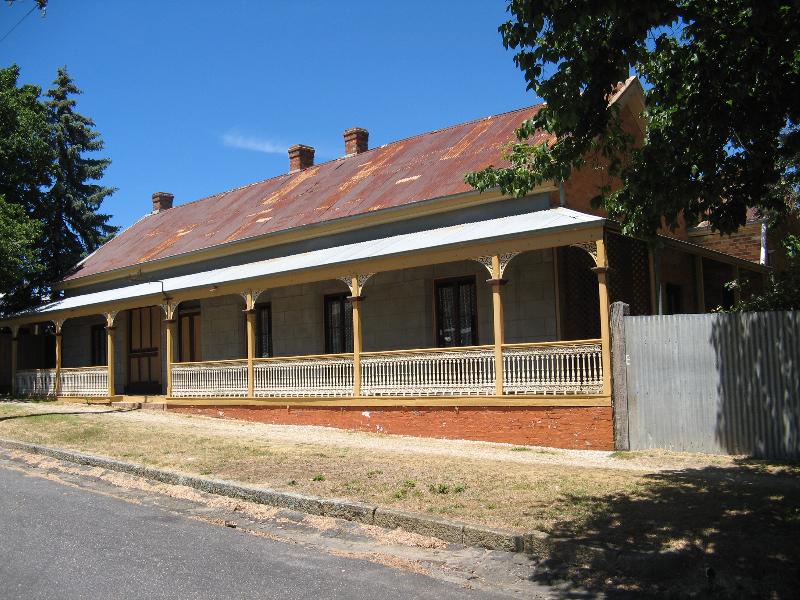 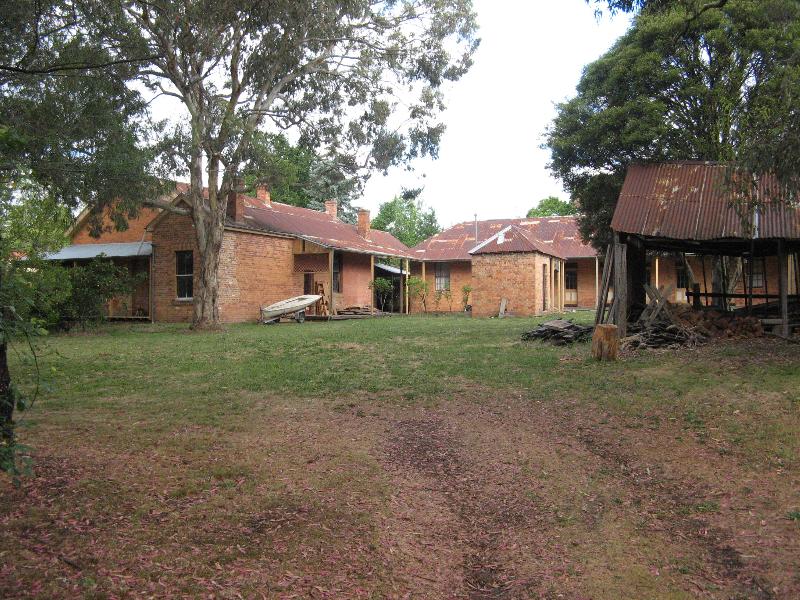 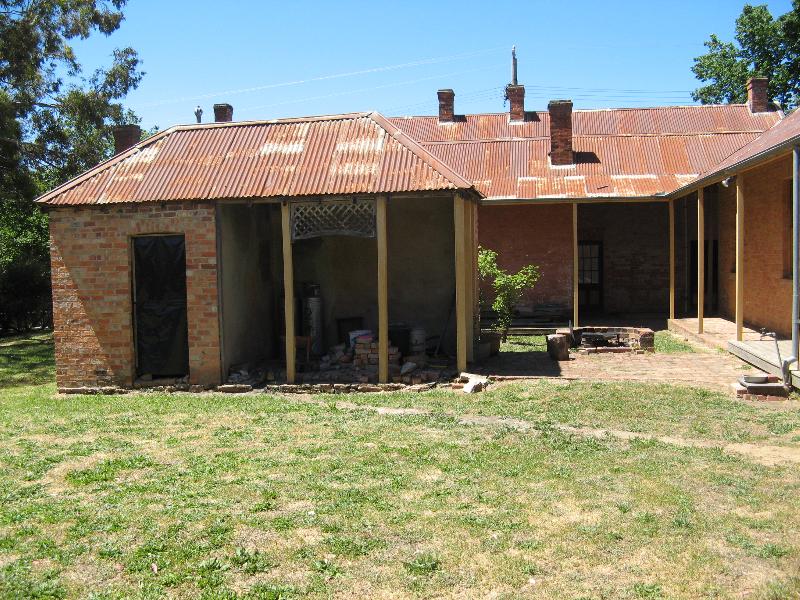 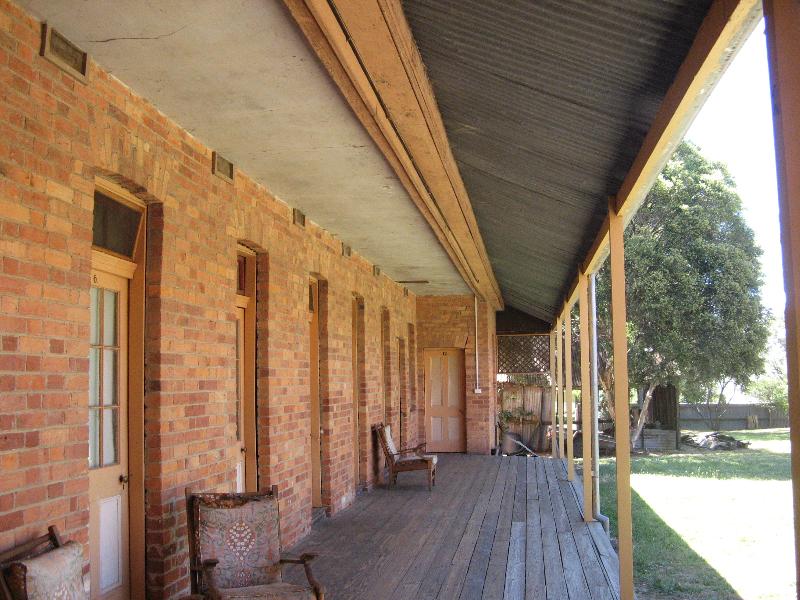 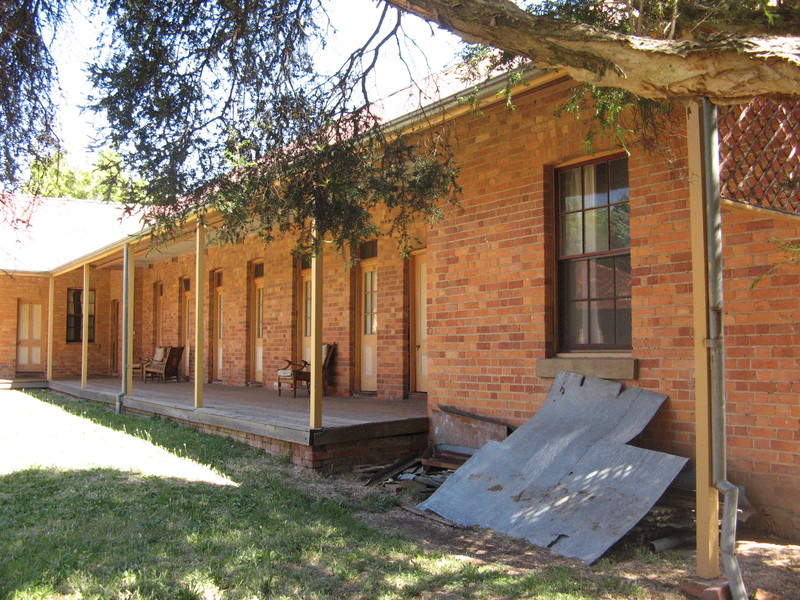 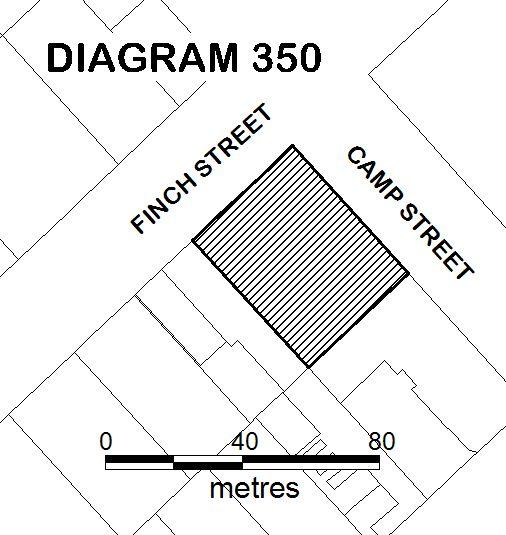 The London Tavern was built in stages between 1859 and 1866 by William Thompson Soulby (1830-1916), who was born in Lincolnshire and came to Beechworth in 1856. Gold had been discovered in the area in 1852 and the town grew rapidly to become the main town in north-east Victoria. Soulby purchased land in Camp Street in 1857, and in 1859 built the first wing of the present building, facing Camp Street. No architect is known. It was the first brick hotel in Beechworth, and had verandahs along the front and back, and a weatherboard kitchen and stables at the rear (now demolished). In 1860 Soulby added a dining room, and in 1860-61 an adjoining accommodation wing with several single rooms and a family room. In 1862 a detached brick bathroom building was constructed at the rear of the hotel, which was divided into two parts, part serving as a guest bathroom and part as a 'summerhouse'. In 1863-64 a second accommodation wing was added across the rear of the site, forming a three-sided courtyard with the bathhouse in the centre. The front wing was extended at the rear in 1865-66. The courtyard was planted with a garden. Soulby sold the hotel c1870, and under the ownership of Felix O'Connor in 1876-86 it was refurbished. For several years after 1909 it was known as the Federal Hotel. The last licence for the hotel was issued in 1912 to John Kelly, who in 1918 purchased the building. It was used as a family home until 1970, by which time the buildings were in poor condition. In 1970 it was purchased by a syndicate of Melbourne academics and friends with close associations with the National Trust and a great interest in the heritage of Beechworth, with the aim of conserving the buildings.

The Former London Tavern is a complex of brick buildings with corrugated iron roofs, occupying part of a large corner site. The former hotel is made up of three single-storey brick wings enclosing three sides of a grassed courtyard, with a brick bathhouse in the centre. The front wing (1859, extended at the rear in 1865-66) originally contained the hotel's public rooms, including bars and a dining room, as well as bedrooms. This wing is largely surrounded by verandahs, and the front verandah on Camp Street has cast iron balustrading and brackets, a wide shuttered window opening into the bar and French doors opening into the other rooms. The front wing retains original features such as fireplaces, doorways, some original wallpaper, painted finishes and shingles beneath the corrugated iron roof. The cellar beneath the former bar area has an entrance under the rear verandah. The east wing (1860-61) included a dining room and several bedrooms, and the south wing (1863-64) also had bedroom accommodation. These rooms open off the verandahs (which have been widened) facing the courtyard. The bath house is a brick building with shingles beneath the corrugated iron roof. At one end is an enclosed room, used as a bathroom, and next to it an open section which may have been used as a washhouse and drying area, rather than as a summerhouse.

The London Tavern is of architectural and historical significance to the State of Victoria. It satisfies the following criterion for inclusion in the Victorian Heritage Register:

The London Tavern is significant at the State level for the following reasons:

The London Tavern is historically significant for its association with the Victorian gold rushes of the 1850s. When begun in 1859 it was the first brick hotel in Beechworth and the best hotel on the Ovens goldfields, and lay on what was then the main route between Sydney and Melbourne. It demonstrates the rapid growth of the goldfields towns, and the need for such facilities in these towns, following the discovery of gold in the early 1850s. The former hotel is also significant for its association with the early history of the urban conservation movement in Victoria. [Criterion A]

The London Tavern is architecturally significant as one of the most intact examples in Victoria of a country hotel building of the mid-nineteenth century. It is a rare surviving example of a goldfields hotel, and demonstrates the sort of facilities provided for travellers and visitors at the time, with several public rooms at the front and bedrooms opening off rear verandahs. The bath house in the courtyard dates from a time when separate bathroom facilities in goldfield hotels were rare, and is a unique example of its kind in Victoria. [Criteria B and D]

The London Tavern is also significant for the following reasons, but not at the State level:

The London Tavern is significant as one the first brick hotel in Beechworth, and one of the most popular hotels on the local goldfields in the late 1850s and 1860s. It is one of a number of hotels built in Beechworth from the 1850s and is illustrative of the need for such facilities in the town. The restored street facade is an important part of the Camp Street streetscape. It is significant for its association with William Soulby, the first owner, a prominent local resident and businessman who arrived in Beechworth in 1856. The complex is significant for its association with the early activities of the National Trust in Beechworth and with a number of early activists in the heritage and urban conservation movement, including George Tibbits, who was largely responsible for Victoria's first heritage area study: 'Beechworth - Historical reconstruction' (1976).