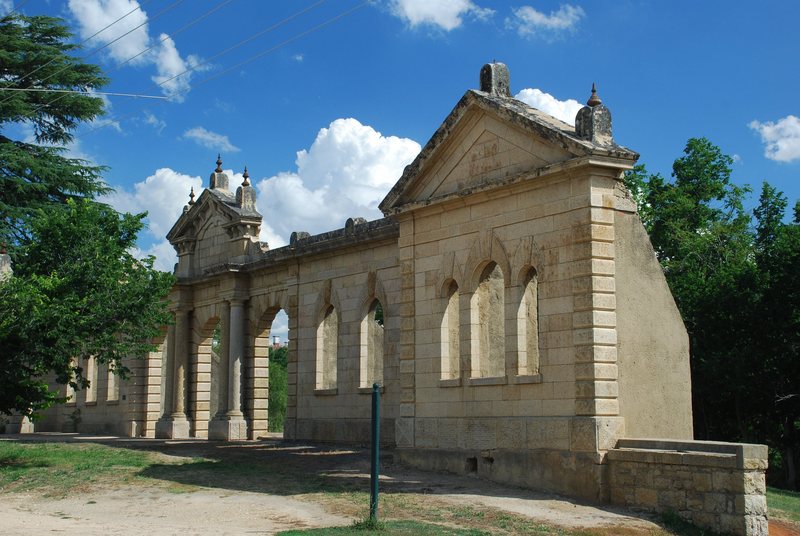 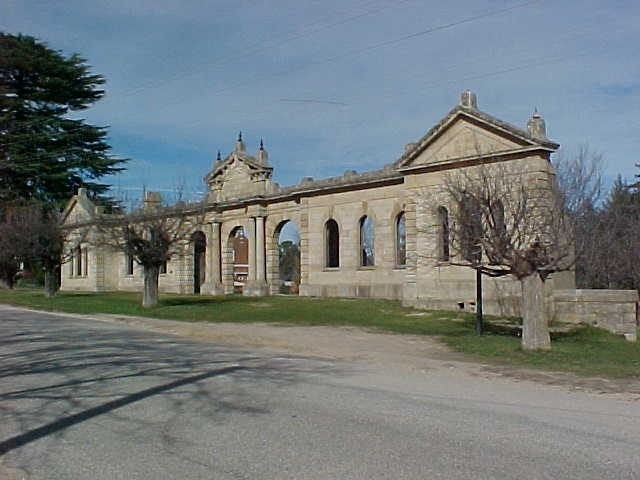 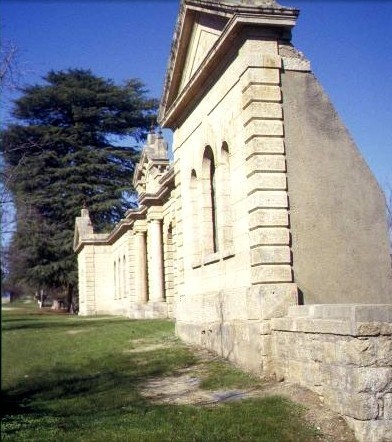 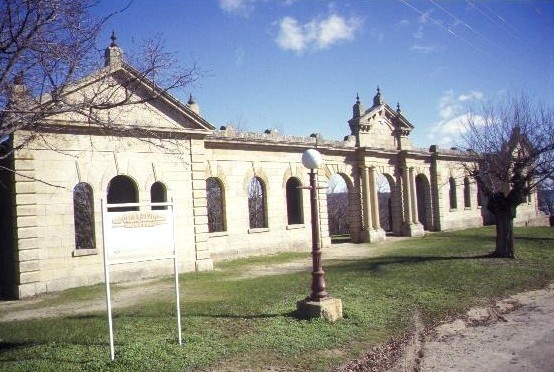 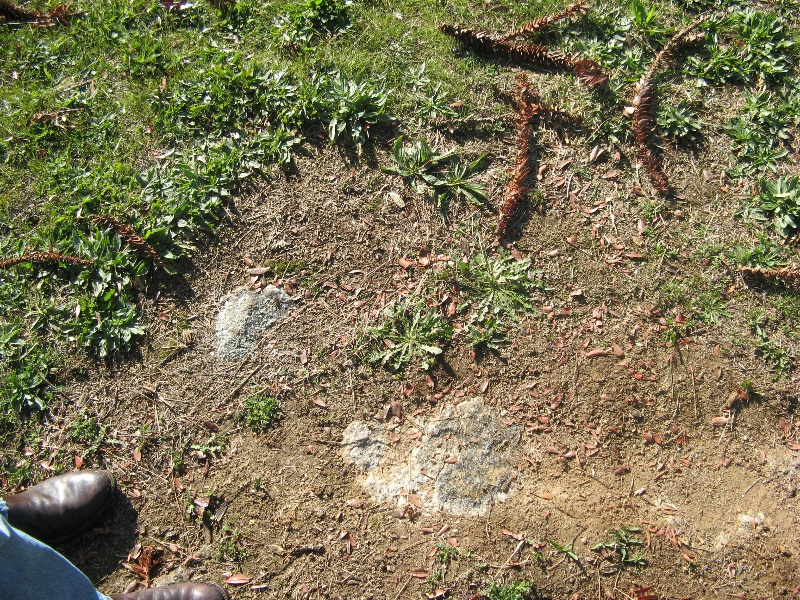 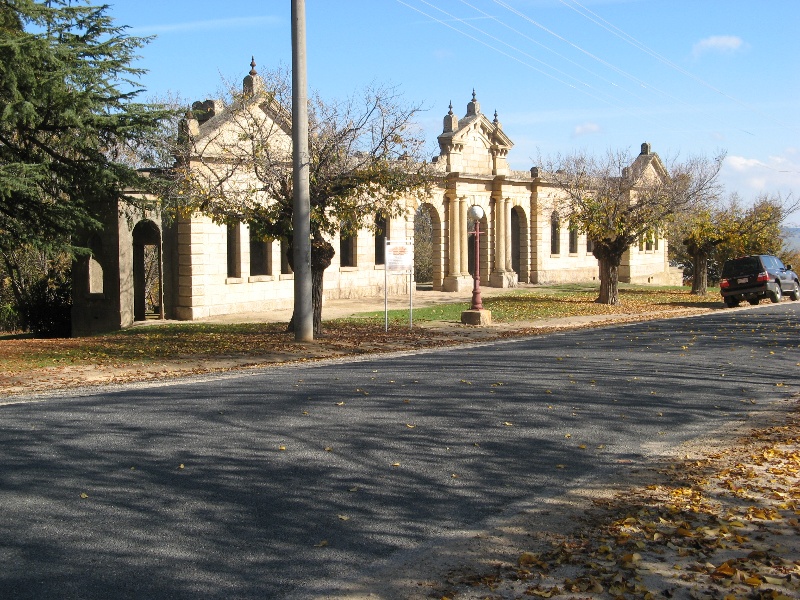 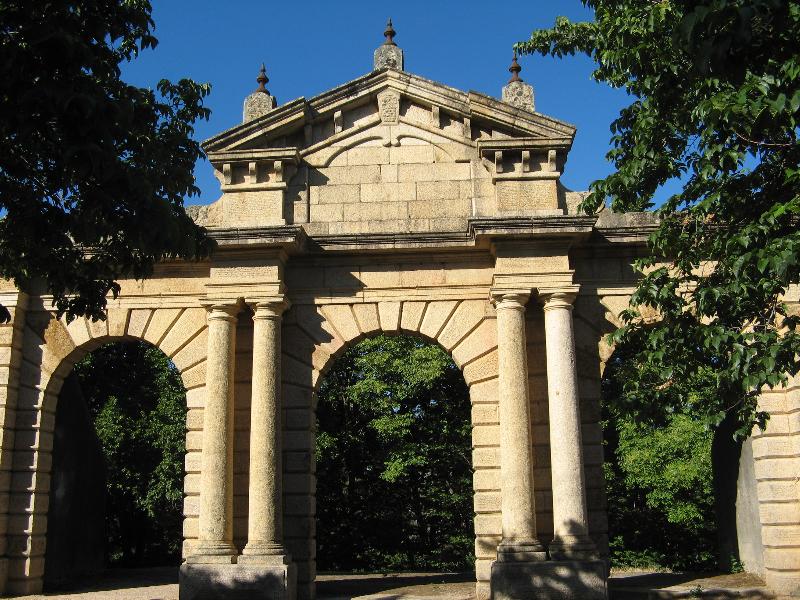 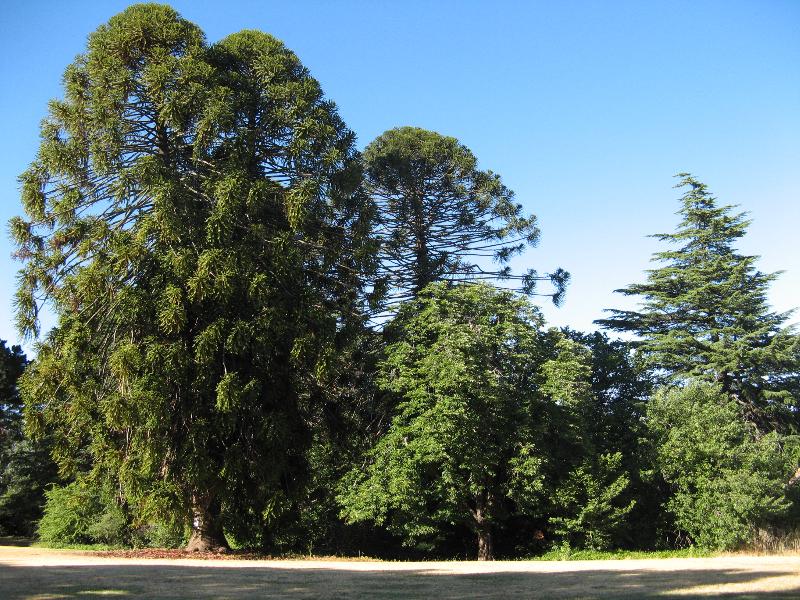 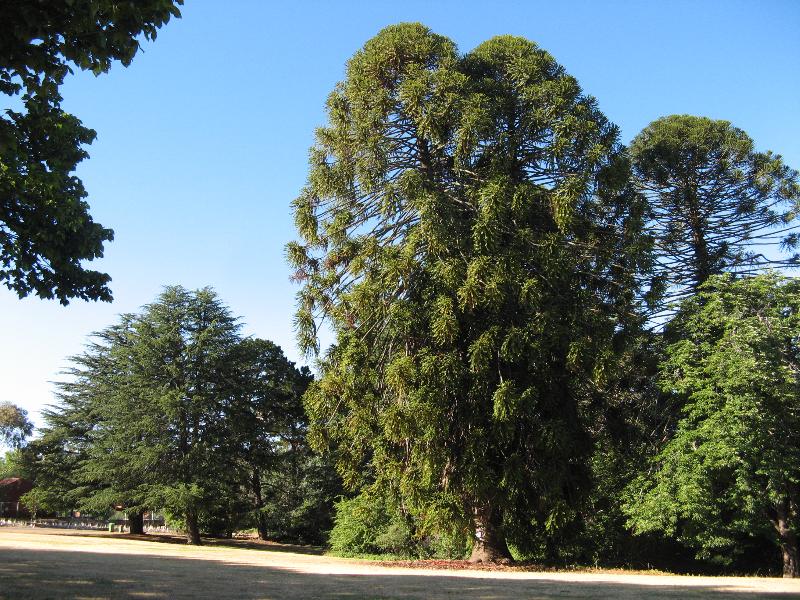 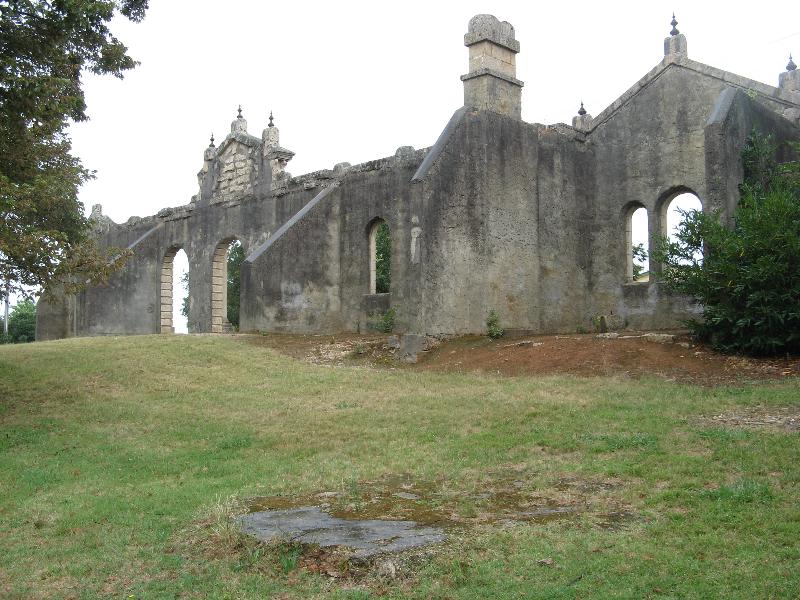 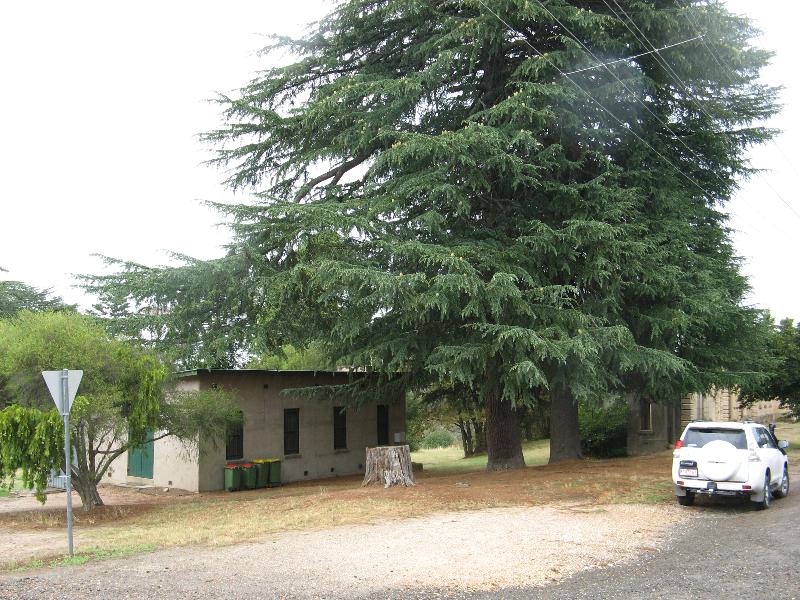 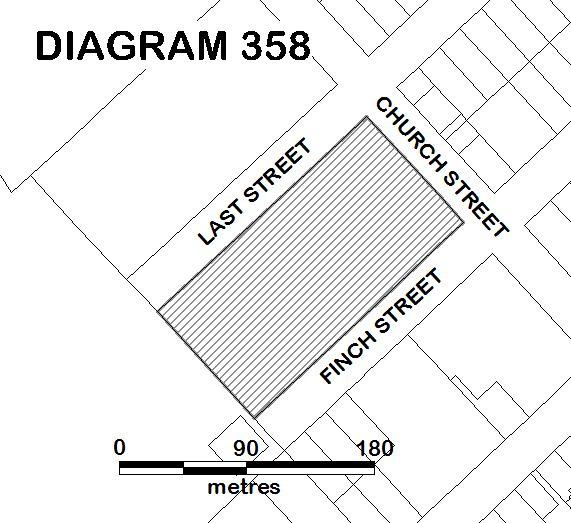 The Former Ovens District Hospital (formerly known as the Old Hospital Ruins), consisting of: the front facade of the former hospital, the remainder of which was demolished in 1940; archaeological features, artefacts and deposits that relate to the development and use of the hospital; the landscaping and the mature trees planted in the former hospital gardens.

The Former Ovens District Hospital was built on this site in stages from 1856, and operated until 1940. The first building, designed by J H Dobbyn and built in 1856-57, had two wards accommodating 20 patients. It was then the only hospital between Melbourne and Goulburn in New South Wales, and received patients from all of north-east Victoria. The hospital cared mainly for those who could not afford to consult doctors. A new two-storey wing which doubled the size of the hospital was added in 1858, and another wing was added in 1861. In 1862-63 the earlier buildings were united behind a grand new classical facade. Another new ward was built in 1871, a Chinese ward was added in 1883 and an isolation ward, designed by D Fiddes, was built in 1890. In 1874 the gardens were laid out by R H Jenkyns and planted with over 200 species of trees, including fruit trees, and shrubs, as well as vegetable and flower gardens. During the early twentieth century, with the construction of new hospitals in nearby towns, the importance of the Ovens District hospital declined, and it closed in 1940. The buildings were demolished in the same year, with only the front facade and the gardens retained. A scout hall was built in the grounds in 1962. In 1964 restoration work was undertaken on the hospital facade. The former hospital gardens are now known as Centennial Park.

The most prominent remaining feature of the Former Ovens District Hospital is the impressive front facade along Church Street. This is a long symmetrical Free Classical style composition of cut local granite, designed in the Palladian manner. It has arched windows and pediments at the centre and at each end. The central entrance is most elaborate, with three arched openings with rusticated voussoirs, pairs of attached columns and a Baroque-inspired pediment above. The end sections have Palladian-influenced triple windows. The site contains archaeological remains of the former hospital buildings, which were demolished in 1940, and other archaeological evidence for the use of the hospital in the period 1857-1940. The site has many mature trees originally planted in the hospital gardens: sixteen specimens of Cedrus deodara, three Araucaria bidwillii, two Pinus nigra var. corsicana, an Arbutus unedo, Catalpa bignioides, an unusual Fraxinus americana, an outstanding specimen of Seqouia sempervirens, a rare Pinus sylvestris, a rare Juniperus virginiana, a fine Aesculus hippocastanum, rare Ulmus x hollandica 'Purpurascens', two very old Pinus radiata, and numerous Populus alba trees and suckers.

The Former Ovens District Hospital is of archaeological, architectural and historical significance to the State of Victoria. It satisfies the following criteria for inclusion in the Victorian Heritage Register:

Importance in demonstrating the principal characteristics of a class of cultural places/objects.

The Former Ovens District Hospital is significant at the State level for the following reasons:

The Former Ovens District Hospital is historically significant as a demonstration of the need for medical facilities in goldfields towns in the mid-nineteenth century, when hospitals were only for the poor and those without relatives to care for them. The grand style and scale of the facade symbolises the optimism and vision of the gold rush period. The former gardens demonstrate the scale and nature of hospital gardens in the nineteenth and early twentieth century. Such gardens included ornamental gardens, which were considered conducive to healing, as well as orchards and kitchen gardens for food production. The plantings include conifers, in particular several large Himalayan Cedars (Cedrus deodora), an outstanding Coast Redwood (Sequoia sempervirens), rare Scots Pine (Pinus sylvestris), Pencil Cedar (Juniperus virginiana),several Bunya Bunya Pines (Araucaria bidwillii), and a very tall Purple-leaved Dutch Elm (Ulmus x hollandica 'Purpurascens'), and American Ash (Fraxinus americana). [Criterion A]

The Former Ovens District Hospital is of architectural significance for the Classical style front facade, erected in 1862-63, which is one of the earliest remaining, and most impressive, hospital structures in Victoria. The fine classical style facade demonstrates the importance attached to such buildings at the time. [Criteria B, D]

The Former Ovens District Hospital is archaeologically significant for its potential to contain features, artefacts and deposits that relate to the development and use of the hospital. The remains of stone building foundations are visible at ground level across the across site, and scatters of historical artefacts (glass, ceramic and metal) can also be seen. It is likely that the site contains archaeological remains of structures including wards, apartments, and other hospital buildings that have the potential to provide information about the design, construction and use of the place. It is also likely to contain occupation deposits and layers of lost or discarded items that may provide information about the experiences and living conditions of staff and patients at the hospital. The site is a rare example of a large, mid-late nineteenth century hospital site that is likely to have a high degree of archaeological (principally sub-surface) intactness [Criterion C].

The Former Ovens District Hospital is also significant for the following reasons, but not at the State level:

The Former Ovens District Hospital demonstrates the importance of the town of Beechworth in the nineteenth century, when it was the administrative centre for north-east Victoria. The facade is one of the most distinctive and impressive classical facades in Beechworth.